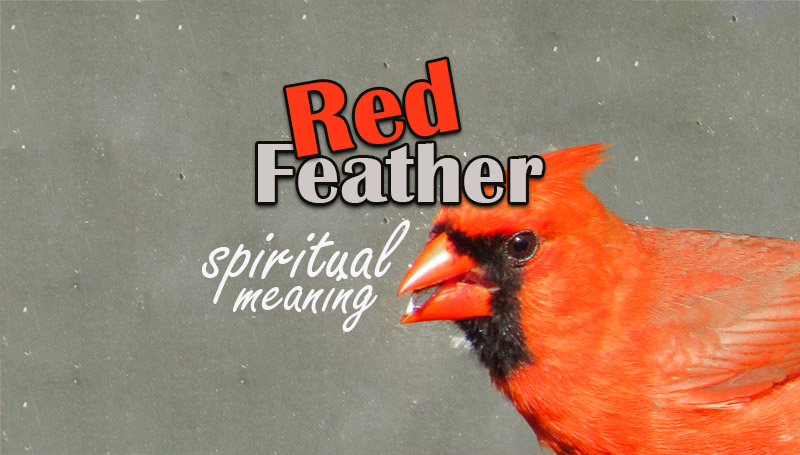 Before we get into red feathers, we should understand the meaning of feathers in general.

Feathers, throughout history and around the world, have powerful meanings. Some cultures in Polynesia used feathers as currency, while some Native American people in the North, Center and South of the continent use feathers as status symbols.

Meanwhile, in the West, we often associate feathers with peace through the dove—an enduring symbol of peace. But, beyond that symbolism, there is also a common spiritual meaning taken from feathers. Specifically, feathers are believed to be a sign that your guardian angels are watching over you.

Feathers Are a Gift of Freedom

Another common message feathers convey is that of freedom. This is because, unlike us humans, birds are free to soar through the skies and bypass the trials of topography. As such, we envy birds their freedom.

So, should you receive the gift of a feather from a bird, then it can be taken as a message that you should think about where in your life you have given away your freedom. Once you have identified that loss of a freedom, then think about ways you can reclaim your independence and self-determination.

Red is an evocative, provocative, significant and symbolic color. After all, blood is the color red; so, red can be about the essence of life, it can be about life and death, love, passion and violence. Red also stands for power and force. While, in East Asia red symbolizes prosperity and good fortune. So, when receiving a red feather, it can be a message combining that of a feather with that of the color red.

First of all, let’s think about the color red, red feathers, and romantic relationships. Many birds form monogamous pairs—working together, with loyalty and devotion, to prepare a nest and raise young. So, should you receive a red feather, it could be a sign to focus on love and devotion. Think about your current or potential relationship—is it time to settle down and build a nest?

Next, let’s consider the Eastern meaning of the color red. Should you receive a red feather, then it could be an omen that your business ventures or personal finances are going to improve. Perhaps now is the right time to start a business?

Vermilion Bird of the South

The Chinese perceive four constellations. In the sky’s stars they see the Azure Dragon, the Black Tortoise, the White Tiger, and most importantly to us, the Vermilion Bird.

This red bird represents the element of fire. So, naturally, it also stands for the warm summer months. And, it represents the south. It is also known in other Asian countries. Its name is Zhuque in Chinese. But, it is known as Suzaku in Japanese, Jujak in Korean and Chu Tước in Vietnamese. In appearance, Zhuque resembles a pheasant. But, it isn’t any ordinary pheasant, it is forever engulfed in flames.