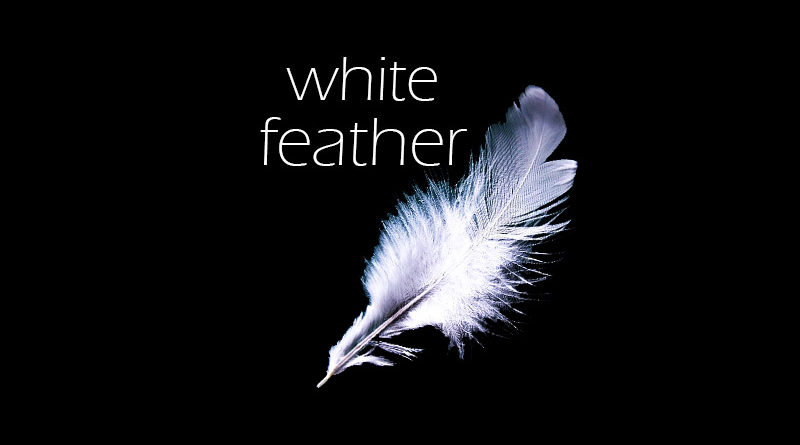 White feathers – maybe you found one on the floor—right in your path!—and you’re wondering what it means. Is there a specific spiritual meaning associated with white feathers? Are there omens, messages, and symbols linked to white feathers?

Feathers, Past and Present, All Over the World!

Before looking at the particular significance of white feathers, we’ll start by establishing a general meaning for feathers. Of course, posing the question “what do feathers mean?” sure is opening a big can of worms! Because feathers, after all, seem to be inherently fascinating to us. Mammals, like us, don’t have feathers. So, naturally feathers capture our interest. For example, the repetitive organization of a feather’s structure is interesting. Think about it, from the central shaft—which is hollow and light—extend colorful, shiny, delicate strands grow. Gosh, of course we love feathers!

So, naturally, cultures all over the globe—both past and present—consider feathers to be significant objects. For example, in the West, we link feathers with our angels. And that’s especially true for white feathers. But, that isn’t only a Western thing. The idea of feathers linking the earth with the heavens is present in others cultures. For instance, certain Native American peoples believe feathers are a bridge between Mother Earth and the Spirit World.

Feathers and the Gift of Freedom

When you see a bird—especially if that sighting feels significant—it can be a strong message of freedom. This is because birds, being able to fly high above the earth and leave its burdens behind, represents total freedom. So, when you come across a feather in your daily life, it is a gift from the bird to remind you that freedom is there for the taking.

So, we’ve learned that feathers in general are linked with the celestial world. But, what do white feathers mean specifically? Well, a white feather brings several meanings. White feathers represent our guardian angels. They are also a symbol of peace. Being white, they also signify purity. And, finally, white feathers are also associated with healing.

When we depict angels, we do so with white-feathered wings.

So, of course, a white feather can be taken as a spiritual message from our guardian angels. What are they trying to tell us? Well, simply that they are present and watching over us. More than anything else, the message from a white feather can simply be encouragement, i.e. keep keeping on. Because, no matter what happens, our angels are there for us.

So what does that mean for you in terms of a message? Well, maybe it’s time to bury the hatchet with some old enemies? That’s not to say you should get back into negative or toxic relationships. But, rather, think about where perhaps you’d been unreasonable in the past. Are there people in your life who probably deserve an apology. Well, then, it might be time to swallow that pride and make up.

In the West, the color white represents purity. As such, that message of purity can be passed on to white feathers.

So, when a white feather presents itself, it could be a message of purity. How this applies to your life, of course, depends on your context. It could be anything from a new baby being on the way to a wedding.

According to Roman mythology, Caladrius is a bird with white snow-white feathers.

This bird has the ability to absorb the sickness from a house, thereby healing the inhabitants. The bird then flies away, and as it flies, it disperses the the sickness which allows the bird to also heal itself.