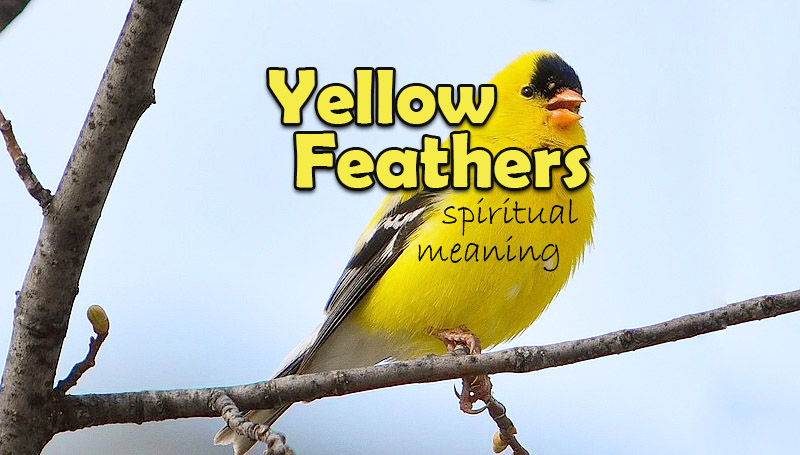 While yellow feathers do carry their own specific meaning, it’s important to first understand the spiritual and symbolic significance of feathers in general. Posing the question “what do feathers represent?” is like opening a huge can of worms! Why? Well, because feathers just so darn interesting to us humans. Think about it, feathers are so different to any part of our own human bodies. Furthermore, feathers possess an organization to their structure that our human curiosity and appreciation for order cannot resist. Think about a feather, it has a hollow shaft. From that central core, delicate and colorful strands extend.

So, as you can imagine, different peoples and cultures all around the world—both modern and ancient—associate various and strong meanings to bird feathers. First of all, here in the Western World, we think of feathers (especially white ones) as signs and messages from our guardian angels. It’s worth noting, though, that the meaning of a link between the earth and the heavens arises in many cultures around the globe. For example, some Native American cultures see feathers as a link between Mother Earth and the Spirit World. Therefore, we can infer a broader almost intrinsic connection between all feathers and all notions of celestial spirits.

A connection to the heavens isn’t the only widely accepted spiritual meaning associated with feathers. Another common association with feathers is that of freedom! Being literally grounded, as we humans are, subjects us to the toils of traversing the Earth, i.e. crossing rivers, mountains, and forests. However, the bird is free of this burden because they can simply take flight and bypass terrestrial barriers—it is the ultimate freedom! So, when you find a feather on the ground—regardless of its color—remember that it is a gift from the bird to remind you that freedom is there for the taking.

But What Does a Yellow Feather Mean?

Yellow is the color of the sun; so, naturally, it represents all life. But, more than just the sun, yellow is a color of the time the sun returns, i.e. spring! So, it is strongly associated with not just life, but new life. Or, also, a return to life, i.e. rebirth. Think about yellow chicks, the rich yellow center of springtime flowers, and the delightful yellow of daffodils.

So, we can take the color yellow and all that it stands for (life, new life, the abundance of life and spring) and then apply it to the meaning of a feather (freedom, a connection to angels and the heavens). This means that a yellow feather provides you with a message of new life, gifted from the heavens and your angels. Moreover, a yellow feather can mean a new or reborn spirituality and connection with your guardian angels.

Above, we focused on the idea that a yellow feather represents new life. But, it’s more than that, it also stands for the abundance of life and abundance in general. Abundant yellow comes from the sun, is found in the pollen of flowers, the rich yolk of an egg, the thickest honey, and the shimmering yellow of gold, a most precious metal.

So, yes, feathers symbolize freedom and a connection between us and the angels. But, a yellow feather is a sign from our angels that we will be well taken care of. However, it’s that not that we need to be taken care of per se, but rather that the abundant world around us is inherently enough and all that we have to do is open ourselves up to its bounty.

In Buddhism, Hinduism, and Jainism, the garuda is the king of birds! Its depiction varies, sometimes it is a depicted like a bird of prey, while others the garuda is human-like creature with wings and a beak. The garuda, though, is important because it is known to have feathers with golden yellow wings.

The garuda is a powerful being, capable of creating cities and organizations to manage those cities (governments, monarchies, etc). Moreover, the garuda is so large and so powerful that it can both block out the sun and stop the spinning of celestial bodies (e.g. it can stop the earth from spinning).