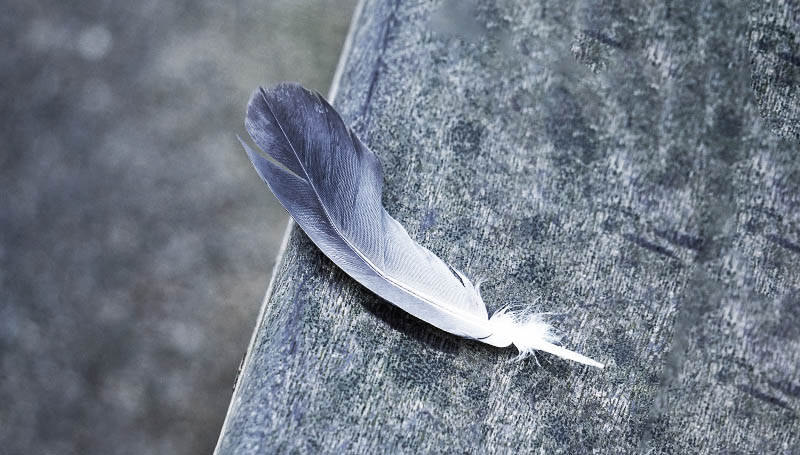 Today, we’re going to talk about the spiritual meaning of finding a gray feather!

I was walking to my car after an arduous hike around our local Walmart when I spotted something gray atop the sea of asphalt. Immediately, I knew exactly what it was—a seagull feather. A drab, gray and, admittedly, fairly common seagull feather. Regardless of whether the feather was rare or not, I still decided to pick it up and tuck it into my pocket. For some reason, it felt like I was meant to pick it up. Holding that feather in my hand made me feel like I was holding a piece of the sky itself.

Perhaps you’ve had a similar experience?

Feathers are captivating. This is evidenced throughout the world and throughout history—cultures everywhere, both ancient and modern, attach a degree of significance to feathers. For example, the Mexica people (more commonly known as Aztecs) wore quetzal feathers for prestige. While, in Samoa and Tonga, feathers were used as a currency. Why do we find feathers so fascinating and valuable? Well, it is surely a combination of color, delicacy, and limited quantities.

Yes, the material importance—i.e. fashion, currency, social ranking—is important. However, the spiritual meaning of feathers is also noteworthy. For example, Westerners typically associate feathers (particularly white ones) with angels. But, the feather connection to the heavens isn’t only limited to European cultures. For example, certain Native American people believe feathers are a bridge between Mother Earth and the Spirit World.

Birds, you might have noticed, can usually fly. And to us land lubbers, the ability to escape the toils of the ground for the vast freedom of the sky is something to envy! So, because of this, birds are an eternal symbol of freedom. As such, when the universe presents the gift of a feather, gray or otherwise, it is to receive blessings of freedom.

The spiritually-minded are often keenly attuned to the world around them—looking for messages, signs, symbols, and omens in everything. It’s important not to be too fatalistic about so-called omens. The future isn’t set in stone, and often that’s why we think about spiritual messages. Finding a feather isn’t necessarily an omen that you will definitely become more free in the future. Instead, the message of a feather can be a trigger for personal reflection—i.e. think about your life, and ask the question: do I lack freedom? If so, think about what you can do to safely take back your freedom.

The Importance of the Color Gray

Gray can be a wonderful emblem of compassion and understanding. It is a color of peace and calm, and can be a reminder to be kind to others. At the same time, gray can also represent ambivalence—the understanding that the truth is complex and simple judgements are often unfair. It is a versatile color that can be both light and dark, easygoing and stern. No matter where you are on the scale, there’s a shade of gray for you and all the people in your life.

So next time you see a gray feather and think it dull compared to its more colorful counterparts, think twice!

What do Gray Feathers Mean?

So, we’ve learned what feathers stand for in general. Also, we covered the spiritual meaning and symbolic importance of the color gray. Now it’s time to combine those meanings and better understand what gray feathers stand for.

Put simply, finding a gray feather represents a divine, i.e. heavenly, ability to set judgement aside and love the members of your community regardless of their minor flaws. Also, a gray feather conveys a message of freedom, its importance, and its value in varying degrees to all people.

We’ve boiled the spiritual meaning of a gray feather into this easily-digestible list. Check it out:

Gray Feathers as an Emblem of the Complexity of Freedom

As discussed throughout this article, birds represent freedom. Therefore, it’s natural to extend that representation of freedom to the feathers they shed—we’re able to use the feathers we find as charms to engender freedom in our lives. Gray feathers are no different—they too convey a spiritual meaning of freedom.

However, the color gray is allusion to the complex nature of freedom in our modern society. There are times when we might resent certain tasks—whether that’s doing the dishes or putting in overtime on the clock. In those times, we might not feel all that free.

Remember, though, there are always ways to find different types of freedom. The gray feather comes to us as a reminder to embody freedom whenever we can.

Feathers represent peace, especially the white feathers of a dove. Gray feathers, though, can also represent peace. This might be hard for you to believe if, like me, you picked up a seagull feather—how on earth can the feather of such a rowdy bird represent peace? Well, it’s all about the color of the feather and the nature of feathers in general.

The color gray represents the middle ground between two extremes—black and white. So, during peace talks, it is important for both sides to make compromises. The color gray is an emblem for that compromise, while the lightweight feather—airy and gentle—represents the easygoing spirit required to bring an end to hostilities. We’ve all had disagreements at some point in our lives, and we’ve probably encountered kind souls who embody the properties of the gray feather. Peacemakers know how to find peace. After all, it is easier to resolve a problem when you meet in the middle. Gray is the middle.

When it comes to morality, it is tempting to see things as black and white, i.e. good and bad. However, as we grow and mature during life, we learn that life isn’t as simple as the movies. There are few purely bad guys, and few purely good guys. The color gray represents the shades we live in.

So, a gray feather can come to you as a message to appreciate the complex humanity of people in your life. Have empathy and compassion for others. What might seem heinous behavior to you, might actually be a complicated experience for the perpetrator. Use your imagination to try to understand people’s perspectives. It will help you come to peace with their actions, and they will benefit from your acceptance and understanding.

For the spiritually-minded, feathers often prove irresistible—there’s just something otherworldly about them. If you can’t ignore the allure of a feather drifting across your path in the breeze, don’t worry! Here at Symbols and Synchronicity we’re exactly the same way.