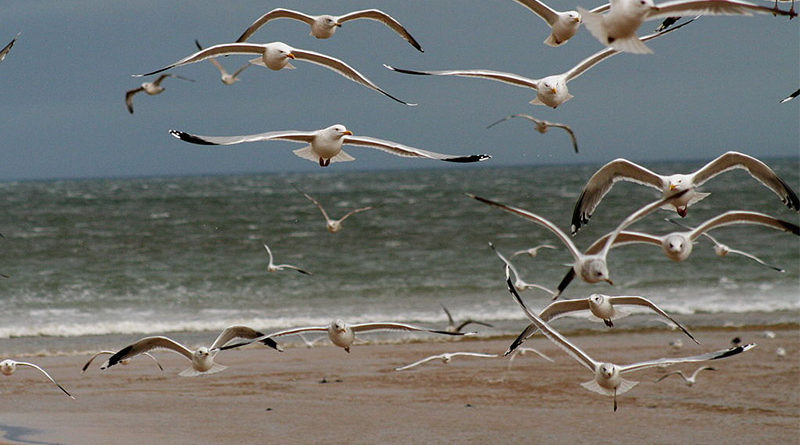 A dead bird is always such an unpleasant sight. Because we hold them up as paragons of grace and freedom, it can be extremely upsetting to see them dead—robbed of their freedom and strewn upon the ground, graceless and gone. So, those of us attuned to spiritual thinking, might immediately question: is there an omen or a message there coming to me from the other side? And, naturally, we might want to assume it’s a bad omen, but fortunately that isn’t always the case.

When reading the signs, symbols and omens around us, it is important to make distinctions between the literal and metaphorical. And a dead bird is no different. A dead bird does not necessarily foretell a death. However, it can symbolize the end of something. Although, figuring out what that something is could be challenging. Ultimately, it is on the receiver of the message to reflect on their personal context in an attempt to discern what might be coming to an end.

Or is a Dead Bird a Symbol of Rebirth?

Remember, with every death (or end), afterwards comes the rebirth. So, if the sighting of a dead bird does foretell the end of something—whether it’s good or bad—it’s comforting to know there is a good chance that something very positive will come into your life to fill the void left by the ending of the previous situation.

Maggots and Decay – Gross, but a Good Omen!

It’s not always a good idea to approach the corpse of a wild animal. Remember, they can be harbingers of parasites and disease. But, if you are unfortunate enough to have a close encounter with the carcass of a bird, the sight of its rotten flesh—perhaps even infested with maggots—can be quite distressing. However, try not to be too trouble by such a sight. The decay of dead animals is a sure sign of life, death and, ultimately, rebirth. Maggots also amplify this meaning. From the dead bird come the maggots which grow into flies which birds eat. The cycle of life never ends. So, should you be troubled by the end of something in your life, remember that in the absence created by loss, something new and beautiful can (and, naturally, will) grow in its place.

Birds and Freedom? So, a Loss of Freedom?

All birds, flighted ones that is, symbolize freedom. After all, they soar over all the troubles of the land—whatever the hurdle: a mountain, a river, a fire, a forest—birds simply fly overhead unperturbed by the challenges below. So, the sight of a dead bird, could symbolize the end of that freedom. As such, be aware of any incoming situations that could restrict your freedom.

It could be that the loss of freedom is, unfortunately, necessary. For example, perhaps you will be required to stay home and help a family member recover from an illness. However, it could also be an unnecessary restriction of freedom. Consider your relationships (especially new ones)—has a new person come into your life with the aim of restricting your freedom? Well, it’s time to ask yourself: is it healthy to let somebody imprison you like that. Reflect on it, talk to family and friends, seek professional advice and consider making a safe change in your life to regain the freedom you deserve.

Is a Dead Bird a Sign That a Dream Has Died?

A person who dreams a lot—especially lofty dreams—is said to have their head in the clouds. So, we characterize our dreams like birds flying above our problems. In our minds, our ideas and passions have true freedom. So, could the sighting of a dead bird be an omen that a dream of yours has died? Yes, it could very well be.

But, that isn’t necessarily the end of it. Don’t let the bird’s loss be your loss, i.e. take the bird’s presence in your life as a sign that you should resurrect your dreams and pursue them. Your dreams never have to die, hope springs eternal. Think of ways you can make your dreams come true, and go for it.

Dead Birds in the Road

A dead bird on the road or on the side of the road brings its own meanings. The open road symbolizes journeys, travel, and freedom. While, the flying bird itself symbolizes freedom. Therefore, the combined sign of a dead bird (i.e. dead freedom) combined with its corpse blocking the road could be a warning of a troubled journey. By no means is this a message that the journey should be avoided, rather that you should be aware of issues while on the road. Pay extra attention and continue with care.

Another interpretation could be that your times traveling on the road are, literally, coming to an end. So, for example, if you are in a long distance relationship and travel often to visit your partner it could mean a couple of things. First of all, perhaps the relationship is coming to an end. Alternatively, it could mean that either you or your partner will be moving closer so that you won’t need to travel to see each other anymore. Also, it could be that you should consider moving closing if you haven’t already.

Dead Birds Around Your House

Dead birds around the vicinity of your house are quite the omen. Considering birds represent freedom and, especially, carefree travel then it can be taken that there may be a period of less travel by the members of your household. Perhaps something will impede your vacation plans for the year.

A dead bird near your house is also a possible sign of a literal predator or, perhaps, a metaphorical predator. Are there any looming threats to your home? Has your dog had any unpleasant encounters with coyotes? Is there a stray cat around the place causing a nuisance of itself. Something to consider.

The Canary in the Coal Mine

Dead birds are also a warning of possible literal toxicity. Of course, the famous example is that of the canary in the coal mine. Canaries played the role of heroes in the coal mine. This is because miners, fearful of poisoning through carbon monoxide, would bring precious caged canaries down into the mines with them. Reason being that the canary is much more sensitive to toxic gases than us humans are. Therefore, when exposed to carbon monoxide, the canary would die long before the miners would die.

So, if you find yourself surrounded by a number of dead birds, then there is a definite literal chance of a noxious contaminant in the air. However, a literal warning isn’t the only one to be aware of. Dead birds can warn of metaphorical toxins too. For example, are you currently suffering in a toxic relationship. Or, perhaps, your place of work has soured and become quite unpleasant? A dead bird can be a warning to reflect upon and, perhaps, make a change to counter any pernicious predicaments.

What Type of Dead Bird

Not all birds are created equal. So, it’s important to think about what kind of dead bird you’ve seen. For example, birds are held up as emblems of freedom because of their mastery of the sky. However, not all birds can fly—penguins, emus, ostriches, et al. But, it’s not just truly flightless birds to consider. Some birds, like cormorants for example, are not the most gracious flyers.

So, let’s look at some common types of bird and think about what they mean.

A dead seagull represents not only the end of a period of freedom, but it signals the specific end of travel overseas.

Furthermore, the loss of a seagull communicates challenges in resourcefulness in the future. In the past, you might have been able to profit from being especially thrifty. However, frugality might be challenging in the times to come. Places where, in the past, you’ve been able to pinch a penny might dry up.

Eagles and hawks are true emblems of genuine freedom.

The loss of an eagle or a hawk is a powerful omen of the loss of a period of freedom and, especially, independence. While this might be seen as a negative, it doesn’t necessarily have to be. This is because, yes, hawks and eagles are free. But, their freedom comes at the cost of loneliness and solitude. So, it could be that the death of eagle tells of an end to time alone and arrival of a romantic interest.

A dead vulture is an interesting omen. This is because the vulture, in life, plays an important role as a symbol of rebirth. Like worms and maggots, it plays a part in absorbing the energy of other beings and putting that energy to good use, i.e. bringing it back to life. However, in death, a vulture symbolizes a lost opportunity to make the best of a difficult or sad situation.

So, should you encounter a dead vulture on the side of the road, then take time to consider mournful thoughts that might be troubling you. It can be so difficult to tackle a melancholic mindset anchored to a sad event, but don’t waste your life by ignoring opportunities to rise back into a life of joy and happiness.

You will know, if you’ve ever been close to them that is, that pelicans are huge. And they’re huge because they take advantage of the ocean’s bounty—i.e. they are symbols of accepting the world’s abundance. So, the sight of a dead or sickly pelican presents a potential omen for a difficult time in terms of resources. This is particularly the case for food.

However, the dead pelican is not foretelling the future, but rather advising you that, perhaps, you could do better. So, turn inwards and think about your habits. Is there a point in life where you are wasteful? Being “wasteful” is a difficult concept to pin down, though. Because, it could be that people lecture you to make your coffee at home. But, if indulging in something brings you joy, then it is not a waste (regardless of what judgmental people might say).

But, there are definitely genuine points of waste in our lives. Sometimes, for some reason, we spend money or time on things that simply do not bring us happiness. Why do we continue to engage in them? Most likely it is simply a habit or routine. Consider breaking it.

A dead crow is, unfortunately, a troubling sign to decipher. This is because crows are symbols of family, loyalty, intelligence, and good humor. So, to see a dead crow is worrying.

Does it foretell a coming loss? Or, does it reflect a possible betrayal by a friend? Lastly, could it mean a dumbing down of your wits? Well, sure, it could symbolize any of these negative things. However, where there is a shadow side, there is also a light side. A dead crow can symbolize the incarnation or reincarnation of a treasured soul from the other side.

When you dream of a dead bird, what—we must wonder—is the subconscious trying to tell us.

Typically, the witnessing of a dead bird in a dream is associated directly with recent bereavement. Feeling the full extent of the loss is a troubling, sad, and very difficult experience. But, that process of acceptance is necessary. Seeing the dead bird in your dream, is your mind crystalizing the loss as an image in your sleeping imagination.

Why does the mind use a bird to represent a loss? Well, speculating, perhaps it is how we view lost loved ones. Because, when a loved one is gone, it is often then and only then that we realize the extent and the truth of their beauty. And in death, we see them as graceful. We think of them in the same way we think of birds.

Therefore, it is quite understandable for the mind to visualize dead birds as part of the grieving process.