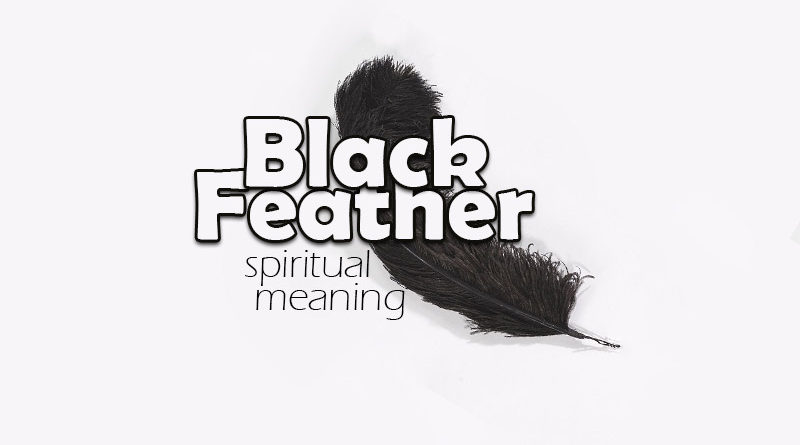 So you found a black feather? Naturally, you might be wondering what it means. Read on to learn about the spiritual meaning, signs, symbols, and omens associated with black feathers.

Before examining the specific meaning of a black feather, we should consider the meaning of all feathers. Asking “what do feathers mean?” is opening a real can of worms! This is because feathers are inherently fascinating to us. After all, these objects are so foreign to us. As mammals, we have no such feature on our bodies. Also, the organization of a feather’s structure captures our human appreciation for order—i.e. a central shaft from which delicate and often colorful strands grow.

So, naturally, cultures around the world—ancient and modern—attach varied and powerful meanings to feathers. For example, in the West, we associate them (especially white feathers) with guardian angels. But, the theme of connecting the earth with the heavens runs through many cultures. Some Native American cultures believe feathers to be a bridge between Mother Earth and the Spirit World.

The sighting of a bird—especially when it feels significant—is often a message of freedom. This is because the bird, being able to soar above the earth and leave its problems behind, represents ultimate freedom. As such, when you encounter a feather, it is a gift from the bird to remind you that freedom is there for the taking.

But What Does a Black Feather Mean?

Okay, so feathers represent a connection with the celestial world. But, what does a black feather mean specifically? Well, a black feather conveys several meanings. But, most of all, black feathers are a sign of supernatural protection and wisdom.

But, feathers are not associated with angels in the same way that white feathers are. This is because the color black is connected with strength, power, and—most of all—protection. According to Japanese tradition, the color black absorbs malicious spirits, thereby protecting you. So, you can use a black feather as an emblem of protection.

Above, we considered the color black’s association with power and, specifically, protection. But, that’s not the only positive trait link with black feathers—black feathers are also powerful symbols of wisdom!

Where this association came from is not clear, but when we think about crows, then perhaps the answer becomes obvious? This is because crows are very intelligent birds. So, it isn’t a stretch the imagine spiritually-minded people the world over making a connection between black feathers and wisdom.

According to Japanese mythology, the appearance of a three-legged raven or a jungle crow is taken as a sign that some divine power is intervening in human affairs.

While the three-legged crow represents divine intervention, it more accurately represents guidance from the divine. For example, it is believed that the yatagarasu was sent to aid legendary Emperor Jimmu.

And, you might be wondering, what divine figure does the three-legged crow represent? Well, yatagarasu is an incarnation of the Shinto moon god, Tsukuyomi-no-Mikoto.