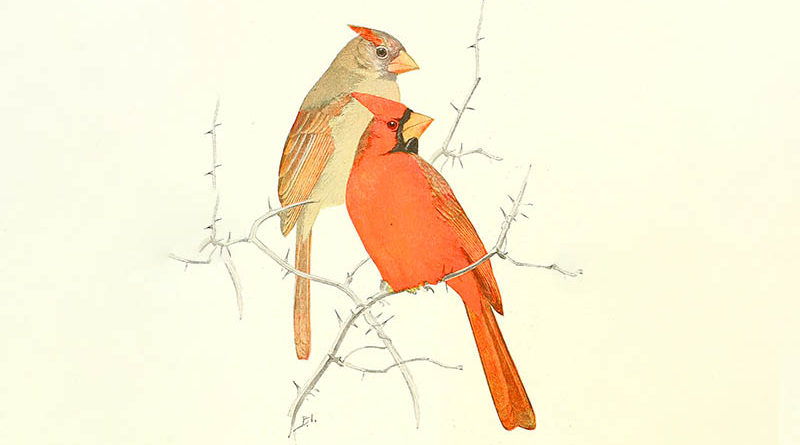 Has a cardinal recently caught your attention? Or, maybe you’ve been seeing cardinals everywhere! With their bright red color, it’s easy to be captivated by these beautiful and memorable birds. When you receive a visit from a cardinal, it’s natural to wonder what it means. It’s no surprise that the symbolism of the cardinal is deep with meaning across many different cultures. They are definitely the most easily identifiable bird in North America. So, what does it mean when you see a cardinal? What spiritual meaning and messages does the cardinal bring? Well, let’s dig deeper.

Firstly, it’s important to remember that since most birds fly and only land when necessary, they generally have an association with spirit coming into the physical realm. The red cardinal is no exception to this connection. In fact, it’s often said that a cardinal will visit when a deceased loved one or your spirit guides want to communicate with you. Often times you will intuitively think of this person when you first notice the cardinal. When this happens, take it as a confirmation that whoever you love on the other side is safe and with you even if you feel alone. What a true blessing to receive this comforting message! But, cardinal symbolism doesn’t just end there.

Positive Omens of a Cardinal

Is it good luck to see a cardinal? Well, cardinals have an association with the root chakra due to their red plumage, therefore we can expect luck and stability to come into our lives when we see one. You can’t go wrong with that! We will explore further on this symbolism later on. However, one of the possibly lesser known aspects of the cardinal is that they mate for life and stay within the same territory year round. And, since of course, the color red has a connection with love, you might expect a committed romantic relationship to enter into your reality soon. Aw, how romantic!

Another interesting fact to note about the cardinal is that they are considered fairly intelligent compared to other birds. For instance, they are often known to hang around back yards for easy access to bird feeders and seem to know the best time to access them with as little competition as possible. Because of this, spirit might be sending you a message to rely on your intelligence and intuition to overcome any obstacles in your way. You are perfectly capable of outsmarting your competition. Know that you have luck and your spirit guides on your side helping you along your path.

Negative Omens of a Cardinal

Is it ever bad luck to see a cardinal? Great news, generally there are no negative omens associated with seeing a cardinal. There are a few Native American tribes which believe the cardinal can represent possible relationship status change since they are strongly connected with love and devotion. This could be a good or bad thing, depending on the situation. But, generally, the cardinal has only positive associations. However, there are a few superstitions that have an association with birds in general. For example, if one gets into your home and is unable to escape, you might expect bad news soon. Some darker superstitions say that if the bird dies within your home, this news might even mean death! But, overall, it’s safe to say that the cardinal is a an extremely good omen to receive and there’s no need to worry.

Does Seeing a Cardinal Mean That I’ll Be In Love Soon?

If you are looking for love or a commitment and encounter a red cardinal, then you are in for some good news. It is especially a good sign when you are hoping to take your relationship to the next level. Since cardinals are known to mate for life and stay in the same area, you might very well expect a commitment soon. As mentioned above, some Native American tribes associate the cardinal with a change in relationship status. So, if you are hoping for that marriage proposal soon, a cardinal is a fantastic sight to see! And, if you are hoping for new love to come into your life, the cardinal’s strong association with rebirth in spring is important to keep in mind. All signs point to a new, passionate love flourishing soon!

What Does Seeing a Red Cardinal in the Winter Mean?

There’s an old superstition that seeing a red cardinal in the depth of winter means the spring will be prosperous and fruitful. Because of this, red cardinals are often used on Christmas cards and other winter themed artwork. They are thought to have a connection with renewal and good luck. What better imagery to get you through the dreary depths of winter than the promise of spring with a bright red cardinal?

There is also an association with the Roman Catholic Church since their senior church officials are called cardinals and wear red robes. Because of this, it is often said they are connected with the blood of Christ and Christianity in general. This belief is a common explanation for cardinal’s appearing on Christmas cards. However, it’s important to remember that cardinals were not native to the areas where the bible was written. So, there is no established or historical well-documented link. Still, if you are connected with Christianity, you might take the cardinal as a sign to pay more attention to that area of your life.

What Does Seeing a Brown Cardinal Mean?

Generally, the brown cardinal is the female of the pair, but sometimes can be a young male who is molting. Although she is less visually striking, she embodies the same luck as the male counterpart since she has red feathers in places. She also embodies feminine energy, so pay attention to your feminine side! She also has a connection with family and home. So, when you encounter a brown cardinal, pay attention to matters in your family life. You can expect good luck and changes in this area of your life. The brown cardinal often appears when good news is on the way, especially when it comes to family!

Believe it or not, cardinals don’t come only in the color red. While extremely rare, it is possible for cardinals to be yellow sometimes. Estimates have seeing a yellow cardinal around one in a million or so. If you are lucky enough to spot one, congratulations! It’s possible nobody will believe you, that’s how special this visitation is. And, since cardinals are linked with luck in general, you might want to go out and buy a winning lottery ticket. You can’t get any luckier than that!

But, from a spiritual aspect, the color yellow is linked to the solar plexus chakra. This chakra is linked to self-confidence, courage, and personality. So, seeing a yellow cardinal is a message from spirit to let your true self shine. You are beautifully unique, just as the yellow cardinal is. Feel confident in yourself, you are wonderful and should share your gifts with the world. If you have interest in learning more about the solar plexus chakra, check out our free comprehensive chakra balancing guide here.

What Spiritual Advice Does the Cardinal Bring?

The most important feature of the cardinal is its bright red color. The color red has a link with the root chakra. When spirit asks us to pay attention to the root chakra, be mindful of your stability and safety. Work on staying grounded and present, get out into nature if possible. It’s important to note where you see the cardinal as well. For example, if you see a cardinal around your home, it’s important to take a look at your domestic life and see if there are areas you can improve upon. What can you do to bring more peacefulness and comfort into your home life? Are you are feeling unsafe at home and what can you do about it?

What Does Seeing a Flock of Cardinals Mean?

Have you recently seen a flock of cardinals? It’s very rare to see cardinals in a flock since they are generally territorial. However, in the winter when food is more scarce they can sometimes flock together. So, what’s the spiritual meaning? Well, seeing a flock of cardinals asks us to pay more attention to how we interact with others. Do you have poor boundaries with others? Are there ways you are sacrificing yourself or your loyalty simply to fit in? Be mindful of staying centered and grounded within yourself even around others. Also, since cardinals have an association with change, you might possibly expect some change in your social standing in a group or workplace. As long as you remain calm and secure, this change will most likely be positive.

It’s always tragic to see a dead bird, but it’s especially memorable seeing a bird like the cardinal. What does it mean to see a dead cardinal? Firstly, try not to blame yourself for an accidental cardinal death. Sometimes cardinals fly into windows by chance or because they even view their own reflection as a rival. Make sure to check out our in depth article on the spiritual meaning of dead birds for more insight on this topic.

But specifically, since cardinals are often associated with being messengers from deceased loved ones, seeing a dead one can seem to be a very confusing message. However, it can be a message that the end is ending. In other words, a new beginning after an ending will soon dawn like a brand new, precious day in your life. It is a striking reminder that life has its seasons, and to allow this change to happen naturally. Enjoy the current moment and be present.

A dream about cardinals can mean several things. As always, it’s important when interpreting dreams to pay attention to the entire context of the dream. Generally, cardinals are seen as messengers or signs of change. If the dream was calm and serene, you might expect positive and powerful changes to enter into your life. If you were thinking of a deceased loved one or person from the past while encountering a cardinal, it could be a message from that person that they are with you in your waking life.

Dreaming of a cardinal also asks if you are being true to yourself, especially when you dream of more than one. Are there areas in your life where you might feel more secure if you change something? The cardinal asks that you take an honest assessment of your life, and look for areas where you can improve your own stability and structure. This is especially true with negative dreams.

For example, if you dream of being attacked by cardinals on your way to work, you might want to take a closer look at your work life. Are you in a truly fulfilling line of work, or are you simply taking the easy route? This particular dream could also speak to changes coming in your employment. If the overall feeling of the dream was positive, expect positive changes. Negative feelings and dreams are warnings to pay more attention to those factors in your life.