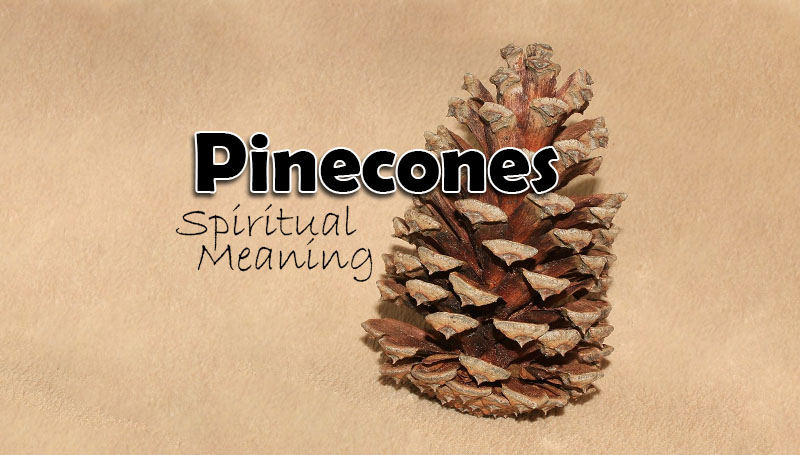 Pinecones engender fascination, especially to curious children. So, it’s no surprise that throughout history and across the globe, they are objects of spiritual and cultural significance. Their woody composition and pattern of scales is, of course, captivating. A pinecone’s evident spontaneous order inspires thoughts of a power beyond the five senses.

So, you might be encouraged to read, that you aren’t the first to wonder: does seeing pinecones carry a spiritual significance? People have been asking that question and finding answers for thousands of years. Let’s look at some of the answers!

But, before we look at what pinecones represent, let’s talk about what they are.

Pinecone can be one word, or it can be two. Both are acceptable. Additionally, pinecone isn’t the most accurate name. This is because they are found on conifers in general, and not just pine trees. As such, Wikipedia’s entry for them is titled “Conifer cone“.

Pinecones are what carry a conifer’s reproductive parts. Interestingly, there are male and female cones. The male cones give off pollen, whereas the female cones are larger and woody. It is actually the female cones that would be recognized by the layperson as “pinecones”.

Once the female cone has been fertilized by the pollen of the male the seeds develop. Next, the pinecone matures, the scales open and the pinecone is dropped. After which, the seeds are scattered on the ground and the next generation of conifers will grow!

Assyrian carvings dated to 713 to 716 BCE depict pinecones. A four-winged god-like figure is holding pinecones above its head. As such, it is believed that the Assyrians associated pinecones with immortal beings.

And to this day, we continue to associate pinecones with everlasting life. For example, in Western societies, front doors are often decorated with wreaths during the winter holiday season. These wreaths are made with conifer branches and twigs, holly leaves and berries, and—you guessed it!—pinecones.

Of course, evergreen trees are symbols of immortality. But, their pinecones are an even stronger symbol of longevity. This is because pinecones can stay attached to their parent tree for as long as ten years! The tree will not drop its pinecones until the time is right.

Symbol of Nurturing and Protection

Because the conifer tree holds onto its pinecones for so long, they are also a symbol of the nurturing and careful protection of mothers for children. And it is during this long period of time that the seeds slowly develop in safety.

Pinecones—and more specifically, their parent trees—also bring us a message of careful consideration. This is because, even though some conifers can cling to their pinecones for a decade, the amount of time isn’t set in stone. This is because the tree is waiting for the right moment to release the pinecone, i.e. when the weather is most suitable for the seeds to prosper.

What Did Our Ancestors Think About Pinecones?

You may remember being young and being curious about pinecones. That interest feels inherent. And that might not be far from the truth. Because, for thousands of generations, humans have been fascinated by pinecones. Wherever they occur, under so many different cultures, people have found meaning in pinecones.

Pinecones and the Tree of Life

The concept of a tree of life links many different cultures and religions.

For example, the Tree of Life belief is found in ancient Mesopotamia and Iran, while also being present in Buddhist teachings and Norse mythology. But, that isn’t all—elements similar to the Tree of Life can be found in the Bible with the story of the Garden of Eden and in Chinese mythology with carvings of a tree that produces fruit that, when eaten, gifts eternal life.

The Iroquois (or Haudenosaunee) people of North America had their own beliefs relating to the pinecone.

As explained by Native-Languages.org, the Iroquois people held the pine tree up as an important symbol for peace. Furthermore, the wood of these trees was burned with the intent to induce favorable weather. But, they didn’t just burn the pine’s wood to influence the weather. More importantly, they burned its pinecones.

The Mexica (Aztec) People and Chicomecoatl

For example, the Mexica goddess of agriculture—Chicomecōātl—is known for her association with maize. However, some argue that she is often depicted with pinecones and evergreen branches rather than with maize ears and stalks. Specifically, the contention is that, as with other cultures around the world, that the pinecone and its evergreen source are natural symbols of immortality.

Depictions of pinecones are common in Hindu imagery.

The Ancient Greeks and Sabazios

Who is Sabazios? Well, he is a god of the ancient Phrygians and Thracians people. However, you might be more familiar with the name the Greeks gave him: Zeus. Additionally, he was worshipped into Roman times. He was typically depicted on horseback and equipped with a trademark staff.

Sabazios is important when considering the meaning of pinecones because he was often carved, sculpted or drawn with a pinecone. Specifically, he was either holding the pinecone or with the pinecone balanced at the tip of his thumb. Academics debate the pinecone’s meaning. However, it is reasonable to assume its symbolism is similar to pinecones in Hindu imagery.

And What About the Romans?

The pinecone is, ultimately, all about fertility.

So, it’s no surprise to hear it’s associated with a fertility goddess. For the Ancient Romans, it was Venus. Going all the way back to concepts of the Tree of Life, the pinecone has naturally been associated with fertility.

But, Venus wasn’t the only Roman god associated with pinecones. There was another! Specifically, Bacchus was the god of agriculture, wine, and—like Venus—a god of fertility. Although, Bacchus’s association with pinecones goes a step further. Because he carries a staff topped with pinecones.

So many cultures at so many different times in history saw fit to revere the pinecone. Ancient Egypt was the same. The Staff of Osiris is—like Bacchus’s—topped with a pinecone.

Celts and Cones, a Love Affair

Interestingly, an ancient enemy of the Romans—the Celts—shared similar beliefs about the pinecone and fertility.

In fact, the Celts used to believe that the pinecone itself was a fertility aid. So much so that if a couple wanted to conceive, they would place a pinecone under their pillow.

Pinecones are like flowers. In fact, they were an earlier step in the evolution of flowers.

As such, they—like flowers—grow outwards in a Fibonacci spiral. Some place cosmic importance on this as it appears everywhere in the universe. For example, it can be seen in the spiral of a snail’s shell and in the spiral of the galaxies.

Pinecones, the Pineal Gland, and the Third Eye

It is supposed that ancient people were interested in pinecones because they resemble the pineal gland.

The pineal gland has been associated with the third eye. What is the third eye? Specifically, people believe it is an extra eye that is usually placed on the forehead. In particular, the third eye is believed to allow extra sight, i.e. it allows perception beyond literal sight.

So, the use of pinecones in Hindu imagery (and other cultures) is a symbol of supernatural perception.

What Are Cone Cows?!

Last, but not least. Let’s talk about cone cows!

A cone cow is a pine cone transformed into a toy. Kids make “cows” from pinecones by adding legs. Typically, the legs are simply twigs or matchsticks. Cone cows are popular in Nordic countries. For example, in Finland, they are called “Käpylehmä”. While, in Sweden, they are called “kottkor or kottdjur”.