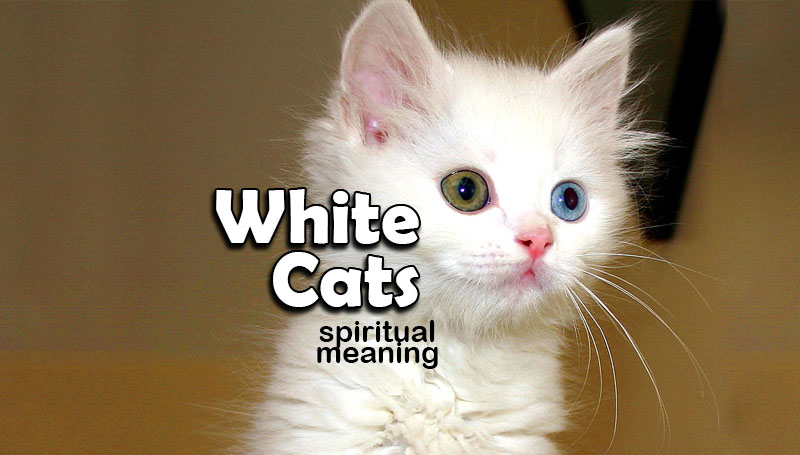 White cats—what are the spiritual and metaphysical meanings, symbols, and omens associated with them?

Have you heard a superstition about black cats? Almost everyone has heard one or another! In some cultures, a black cat crossing your path is a certain sign of bad luck. Still, in others it’s considered good luck! But, what about a white cat? Is the opposite true? Maybe you’ve had one walk out in front of you. Should you be worried or relieved? What is the actual spiritual meaning and symbolism of a white cat?

Well, don’t worry all of your questions will be answered! Firstly, we have to recall the history of the symbolism of cats. In ancient Egypt it was believed that cats were sacred connections the divine and protectors on the spiritual realm. White cats were even chosen to guard some of the temples. It was considered a crime punishable by death to harm a cat, regardless of color. Cats have been cherished across many cultures over time. And who wouldn’t love them? However, combine the cat with the color white and you have even more meaning! White cats were generally considered to be connected to light, positivity, purity, and good luck.

Spiritual Meaning of a White Cat Crossing Your Path

So, you’ve just had a white cat cross your path. How lucky! What should you expect? Well, different cultures believe in different things. But, in most places in the world, it is considered very good luck to have a white cat cross your path! White cats are linked to positivity, purity, and happiness. Pay attention to where you were going when one crosses your path. For example, if you see a white cat on the way to work, you might expect a pay raise, good sales day, or a promotion soon.

And, considering that white cats make up only 5% of the total cat population, it’s a rare sight to see! Consider yourself very, very lucky. We can expect happiness whenever a white cat crosses our path.

Generally, white cats are associated with tons of positive omens! Many countries believe owning a white cat invites prosperity and joy into the home. The color white is associated with purity and cleanliness, so you might even expect good health as well. While there is no scientific evidence to support it, white cats are often considered by many to be more friendly and calm than other colored cats. So, you can anticipate more friendly encounters and serenity in the future.

The white cat is also associated with spiritual enlightenment and hope. Since the color white is considered linked to the light and the divine, it makes sense! White cats are also connected with freedom and liberty since they are free of all marks or colors. They remind us of a blank slate! Who wouldn’t want to invite a new, fresh start into their home?

Traditionally in Japan, Maneki-neko, or often simply referred to as lucky cats, were white. While it is common to see the lucky cat with a calico color now, traditionally the color white generally was linked to positive energy, prosperity, and good luck. They are often placed near entrances to invite abundance into a place of business. And, who wouldn’t want more prosperity in business?

With one paw raised, many people think the cat is waving hello. However, Maneki-neko literally translates to beckoning cat. It is raising it’s paw to attract prosperity. Generally, money is being brought in when the right paw is raised. When the left paw is beckoning, it is pulling in customers. They are often seen holding a coin for even more good luck. And, who doesn’t need more of that? The lucky white cat is a fantastic symbol to have in any place of business. And, they’re super cute on top of it all.

It might be surprising to find out in some places it is actually considered bad luck to encounter a white cat! In places where seeing a black cat is good luck, the opposite is true when seeing a white cat. Make sure to pay attention to what you were doing when you saw the white cat! It could mean trouble in those areas of life. For example, if you see a white cat on your way to a date, it could spell trouble in the relationship. In some countries, especially around the United Kingdom, it’s believed you will live in poverty and lose all of your money if you own a white cat. Talk about bad luck! It was also considered a bad omen to encounter a white cat at night. So, avoid them especially at night!

Are White Cats Linked to Witchcraft?

Nearly everyone has the same image of what a traditional witch looks like. It’s usually an image of a woman with pointy black hat riding a broomstick. She may have green skin with warts. And, they almost always have a black cat! But, what about a white cat? Are white cats linked to witchcraft? How about cats in general? What’s the association?

Well, first of all, witches obviously don’t generally wear hats and fly around on broomsticks. In fact, most people who practice witchcraft you probably wouldn’t even know from looking at them. Logic leads one to believe they wouldn’t always own a cat. Believe it or not, the image of the witch’s black cat familiar is only linked back to the Victorian era. In fact, a woman accused of practicing witchcraft back in the 15th century was actually said to send out a white spotted cat to her enemies! Where did this myth come from?

In ancient times, it was often believed that women were powerless without men. Therefore, women who simply didn’t follow the rules of the current society or seemed independent were accused of practicing witchcraft. Practitioners of witchcraft often had various animals used at familiars, ranging from cats to frogs, ferrets, mice, you name it. However, the cat became the most popular animal to be associated with witchcraft because they are often nocturnal and, most importantly, independent. Cats are also skilled at surviving seemingly certain death. Very magical, indeed!

Interestingly, white cats are strongly associated with feminine traits. This is because white cats are known for their beauty, grace, purity, and almost angelic presence. These traits are often linked to beautiful women. In fact, there’s some debate if Freya, the Norse goddess of love, beauty, fertility, and war, who travelled around in a chariot pulled by cats were white or not. Some people say they most likely were tabby, but no one really knows! In Welsh legend, Ceridwen, the goddess of knowledge, poetry, and transformation, was also said to use white cats to do her bidding. What goddess wouldn’t want a bunch of white cats to do their work for them? Can you blame them?

Dream Meaning of a White Cat

So, you’ve dreamt about a white cat. What does it mean? Whenever we dream about a white cat it’s important to pay attention to what the cat was doing. This changes the message we’re meant to receive. For instance, if you dream of a white, fluffy white cat leisurely resting on a bed, you might be seeking more comfort and finer things in life. An angry or aggressive white cat might mean there is someone or a situation in your life that isn’t as it seems and might be untrustworthy. Be aware!

But, generally, a white cat is an omen of good luck even in a dream. It is sometimes linked to our subconscious desires and hopes. You might want to pay more attention to what you want to achieve in life and if you are on the right path to achieve it. In some cultures however, it’s considered an omen of struggles to come. But, the color white is associated with healing. So, even an uncomfortable situation will be for your best outcome overall, even though that might be hidden from us at the time.

White animals are also linked to spirit guides. It is vitally important to pay attention to how you felt when you had this dream. Pay attention to any personal connections you have to what the cat was doing. For example, if your grandmother often fed her cats cheese and you dreamt of a white cat eating cheese, you might take that as a message of love from your grandmother. Take some time to apply it to your own personal experiences and what emotions you were left with.