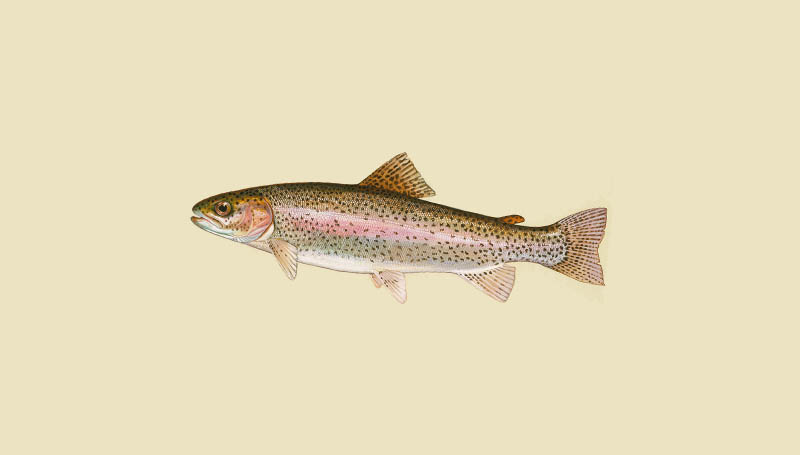 Trout as such intriguing fishes aren’t they? If you go freshwater fishing quite often then they might not seem that remarkable. But, to the rest of us, they’re certainly eye-catching. So, it’s only natural if you encounter an unexpected trout that you might start to wonder if said path-crossing conveys any kind of spiritual message for you. And it doesn’t necessarily have to be a real life trout, maybe you saw a trout fridge magnet? Or a trout in a movie, a painting, or a postcard? Regardless, whether you saw a depiction of a trout or a literal trout, this fish carries a significant, and quite cheeky and charming, spiritual meaning.

All Fish and Water – What Does it Mean?

Before we get into the specifics of trout spiritual meaning, we should establish a baseline understanding of the symbolism of fish and water in general.

First of all, and the tarot fans out there might already know this, water is all about the subconscious and, especially, emotions. Not just any old emotions, though. Typically water symbolizes secretive emotions, particularly desires. And these feelings might even be unknown to the person experiencing them and therefore are certainly unknown to others. After all, if the water runs deep, then so do the secrets, the feelings, and the emotions.

So where does the fish come in? Well, fish (trout are no different) swim through the secretive waters. As such, fish represent the movement, energy, life, motion and constant evolution of our thoughts, desires, and emotions.

Trout as a Symbol of Love

So, we’ve established that water and fish are concerned with deep emotion, secret feelings, and the subconscious. Let’s ask a question: what are most of our deepest feelings about? Especially the secret ones! Well, love, of course.

And the trout is an especially powerful symbol of love. When we think about animals and love we probably think of cutesy, cuddly teddy bears holding hearts. You know the kind! They’re sold everywhere around Valentine’s Day. So, looking at the trout’s big gaping mouth and its unusual looking face you’ll be forgiven for not finding it too cute. But, regardless, the trout is a symbol of love.

Think of the Page of Cups tarot card. In this card, the page is depicted holding a single cup. Inside that cup is a fish! The page is surprised by the fish, it is unexpected. And even more surprised is the person receiving the gift of the cup (fish included). The page of cups, in isolation anyway, tells of a new and unexpected offering of love.

So, the trout (especially a sudden and unexpected one) can be taken as an omen of incoming love. But, the link is even stronger than simply a fish in a cup. The trout sometimes leaps from the water and offers a sudden and surprising message—a message of love.

Trout and Their Pink Flash

There are so many different species of trout and each of them has quite a distinct color pattern. But, the quintessential tout is, of course, the rainbow trout. In the light, the rainbow trout shimmers with a range of colors. However, the most eye-catching part of the rainbow trout’s coloration is its pink flash down the flank.

So, what does this pink flash symbolize?

Well, the pink streak reaffirms the trout’s status as a love symbol. This is because pink represents love. But, not only any old sort of love, but a tender, sensitive, and more innocent form of love. Think of it in opposition to the color red which stands for a more passionate and carnal love.

The trout is a symbol of forthright speech. Think back to this fish’s connection to thought, emotion, feeling, and secrets. Well, pair up powerful emotions with a big old mouth like a trout’s mouth and what do you get? You get somebody who has a lot of feelings and has a big mouth to talk about those feelings with.

When thinking of the trout and speech, I’m reminded of charismatic friends and family who just have a way with words. You know the type—real characters—they hold the attention of the room and have everybody laughing with their ability to be charming and cheeky without crossing the line. But they sure do get close sometimes, don’t they?

Following on, trout aren’t only symbols of forthright speech, they’re also symbols of all around confidence. In fact, the sort of confidence the trout symbolizes borders on outright arrogance!

But it’s this envelope-pushing that makes the trout a positive symbol and omen for those engaging in a new business venture. Not only does the trout symbolize the unshakable confidence you need to get ahead in the business world, as previously mentioned, it also represents the “gift of the gab” you need to navigate the important interpersonal relationships needed in the business world.

Another thing that makes the trout a great omen for success in business is its standing for patience. The trout symbolizes patience because of its well-known hunting method. Most trout are riverine fishes, and so they have to deal with the constant flow of the river—as does their prey. However, unlike the smaller fish and invertebrates they prey on, the trout waits patiently in the pockets of low flow along the banks. There, the fish waits for its prey to go by and pounces.

So, this behavior pattern is an important lesson for those of us trying to succeed in business: be diligent, be patience, but most of all, be opportunistic! Don’t let that meal pass you by.

The trout is also an important character in folklore the world over. However, two tales stand out. First of all, the legendary white trout of County Mayo, Ireland. Secondly, in Iceland and America, legend tells of a furry trout!

The story of the white trout of County Mayo is, of course, a love story. It begins with a girl, a boy, and a king who lived by a lake. The king promised the young lady that she could marry his son, the prince. Tragedy struck, though—the prince was horribly murdered and his body was thrown into the lake.

Of course, the girl was utterly crestfallen. Her sorrow was so deep that it drove her mad. The girl disappeared. Legend has it that the fairies took the girl away.

After the loss of the prince and the girl, for the first time, a white trout was spotted in the lake where they had lived. Sure, the locals loved fishing and eating trout. But, they left the white one alone—they thought, surely, it must be a fairy spirit.

Then, a group of soldiers came stomping through the town on the lake. One of the soldiers laughed at the simple lake people, and thought their reverence for the famous white trout was ridiculous. And so the soldier fished the white trout out of the lake. There, on the banks of the lake he put together a fire and threw the white fish into his frying pan. But the fish wailed and screamed, it flipped and flopped. Though by magic, the trout did not cook.

The soldier, disrespectful and cruel as he was, ignored the screams of the fish and ignored that it didn’t look like it had cooked. Regardless, he pulled the fish from the frying pan and stuck it with his knife, ready to eat it. Then, without warning the fish transformed before his very eyes into the beautiful young lady, once promised to the prince.

The girl explained that she must keep her duty, waiting and searching the lake for her beloved’s return. The horrible soldier, terrified, trembled and begged forgiveness. She warned the soldier he must return her to the lake and change his ways. And, he did—to the end of his days, the soldier lived a kind life. In fact, he prayed every day for the spirit of the white trout of the lake—he wished that she would find her prince.

Have you ever heard of a furry fish? Nah, me neither.

But, that hasn’t stopped tales of a fur-covered trout called “Loðsilungur”. Icelanders believe that this furry fish was created by either demons or giants! Or both!?

The belief is that the furry Loðsilungur is sent to proliferate in great numbers in a river. The intent is that there will be so many of these fish that they were clog up the river, preventing any other fish from existing in its waters. So what, you might wonder. Well, the Loðsilungur is famously inedible. As such, its presence in a river is believed to be a punishment of the wicked from the gods—imagine, an empty belly and river full of fish… and you can’t eat a single one! Truly, an Icelander’s nightmare!