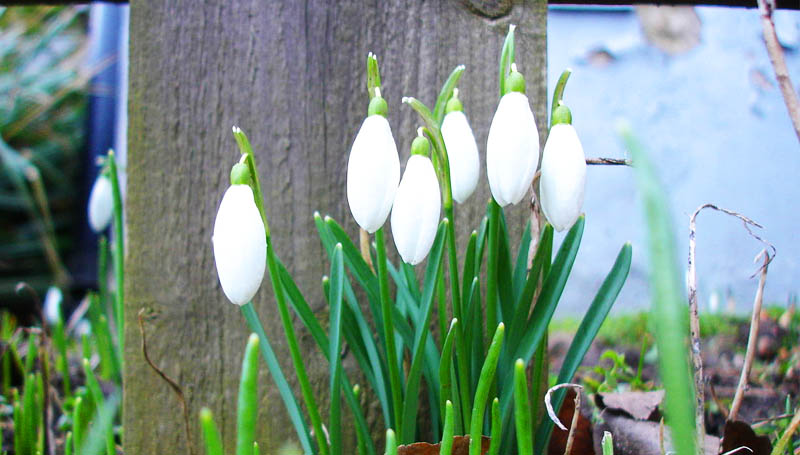 Snowdrops are such a precious sight—winter is still strong and its cold, bleak weather might be getting you down. But, then you spot a dainty eruption of delicate white blooms growing under the trees on a dull country lane. You have been blessed with the life affirming sight of snowdrops in January.

Such a stunning and unexpected sight can feel significant. So, it’s only natural that you might ponder: is there a meaning behind my snowdrop encounter? Well, look no further, because we’re going to answer that question. We look at the spiritual and symbolic meaning of snowdrops. In addition, let’s dive into some of the folklore and beliefs linked to this early blooming wildflower.

It’s important to establish just what we’re talking about—especially when it comes to flowers and common names.

It is the appearance of a snowdrop that gives it its name. The little flowers that droop down like drops and are pure white in color really do look like little drops of snow. Snowdrops typically flower early in the year, while winter is still strong. Like many early flowering plants, they protect their energy underground—stored in a precious bulb. From that bulb narrow sword-like leaves grow, followed by a flower stem.

Scientifically speaking, a snowdrop is one of a number of species of flowers of the genus Galanthus. So, this means that not all snowdrops are exactly the same. In fact, they are closely related to each other and, at a recent point in biological history, shared a common ancestor. Hence, they share a genus.

The origin of snowdrops is debated. While we might think of them as a quintessential part of the British countryside, it is believed they were actually brought to Britain by monks from Turkey. Another theory is that the Romans brought snowdrops with them when they conquered the British isles.

Snowdrops are a very special flower when it comes to the symbolism and spirituality of the seasons, especially winter.

So many early blooming flowers are associated with the rebirth of spring from the death-like grip of winter—daffodils especially. A spring celebration wouldn’t be right without some daffodils in the bouquet.

So do we link snowdrops to spring the same way we do daffodils? Not exactly. Think of daffodils as the trumpets that sound the return of the spring, the sun, and life itself. Whereas, the snowdrop blooms in a much more powerful and almost melancholic way. The snowdrop blooms like a whisper of hope. It is merely a hint that life might come back. In January, with the sun low in the sky and the trees without their leaves, our ancestors could forgiven for giving up hope. It is then, when things seem so hopeless, that the snowdrop arrives.

As such, we can take the snowdrop as a powerful reminder that while bleakness might feel overwhelming, we can still bloom in the cold. No matter how bad things are for you, remember that hope can never be extinguished. It lives in our hearts, it is inherent and irremovable from the human spirit.

The Importance of the Color White

White, like its natural counterpart black, is such a symbolic color. And snowdrops are one of the purest white flowers, so their association with the color white is undeniable. The white of snowdrops symbolizes purity and innocence out of the dark of winter. White also synergizes well with the notion of a new beginning. Additionally, we link white with calmness.

Snowdrops and the Month of January

Unfortunately, snowdrops have a long association with bad luck. Is it fair? Is it accurate? This belief is mostly held in Great Britain where snowdrops have long been grown in churchyards. In fact, they were commonly grown atop graves in cemeteries. So, naturally, an association between death and snowdrops was made. Furthermore, the solemn appearance of the flower’s drooping, almost mournful, flowers doesn’t help.

While snowdrops might be associated with death and bad luck, most believe you will only incur misfortune if you are silly enough to first pick a snowdrop flower, but even worse, should you bring the flower into your house. Bringing the flower into the house is such bad luck that it is believed that the placing of a snowdrop flower inside the house can even turn good milk sour!

My grandpa, bless him, always said the best place for a flower was outside growing in the ground where it belonged. So, take a leaf out of his book (pun intended) and leave snowdrop blooms where they are!

We gift white flowers as an offering of sympathy and understanding to the recently bereaved. This is because the white flowers bring us feelings of calmness and peace. While the most commonly used flower for bereavement is the peace lily, lots of other white flowers are often used.

Bear in mind though, that the snowdrop is not a good choice for a cut flower. Not only is it considered bad luck to cut them, they are so small and so delicate that they would not do well in a bouquet. Furthermore, the gifting of the living plants is also challenging as they grow from bulbs and might be out of season.

But, that doesn’t mean snowdrops as a symbol aren’t appropriate for the bereaved. Their delicate, drooping, mournful flowers are certainly a sensitive choice for a card or other form of tribute.

John Keble was an English vicar born in the 1700s. He was also a renowned poet. He penned a poem about Easter and snowdrops. Below is an exert from that poem.

Thou first-born of the year’s delight,
Pride of the dewy glade,
In vernal green and virgin white,
Thy vestal robes, arrayed:

’Tis not because thy drooping form
Sinks graceful on its nest,
When chilly shades from gathering storm
Affright thy tender breast;

Nor for yon river islet wild
Beneath the willow spray,
Where, like the ringlets of a child,
Thou weav’st thy circle gay;

’Tis not for these I love thee dear –
Thy shy averted smiles
To Fancy bode a joyous year,
One of Life’s fairy isles.

Snowdrops – Gift of the Angels

A well-known story links the snowdrop to the Christian belief of our earliest origins.

Adam and Eve had just been expelled from the Garden of Eden. Naturally, they were crestfallen. They were shocked by the harshness of their new toilsome world. For the first time, they felt the biting cold of winter. Snow fell all around them. Adam and Eve were utterly, utterly hopeless.

It was then that an angel descended from Heaven to explain their plight—why they had been dismissed from paradise. But the angel witness their suffering, their shivering in the cold and snow. The angel felt for the pitiful Adam and Eve. As such, the angel gave them the gift of hope in the depths of winter—the angel gave them the snowdrop.

Moldovan traditional beliefs around the battle between winter and spring involve the humble snowdrops. Moldovans believe in the personifications of winter and spring. And that spring arrives and engages in a monumental battle with her eternal foe: winter. During their battle, spring was injured and the blood spattered across the ground. It was from the blood of spring that the hope for the new year grew. Where the blood had dripped on the ground, snowdrops grew and bloomed.

And I’ve saved my favorite story about snowdrops for last. Traditional German belief states that in the earliest moments of creation, snow came into being. For snow to exist, though, it had to pick a color. Naturally, snow looked to nature’s most colorful things: flowers. But, sadly, the flowers sneered at the snow and refused to share their color with it. They said that the snow was too cold and too unpleasant. After all, the snow would stop them from growing and so they were spiteful, they refused to share their colors with the snow.

The precious, sensitive, and delicate snowdrop took pity on the maligned snow. Graciously, the snowdrop shared its beautiful white color with the snow. And, then, from that moment forward, snow would be a brilliant white color. Just like its friend the snowdrop. In return, the snow gifted the snowdrop a resistance to its coldness and that is why, the Germans believe, the snowdrop is able to grow and bloom in the coldest of cold and the snowiest of snow.