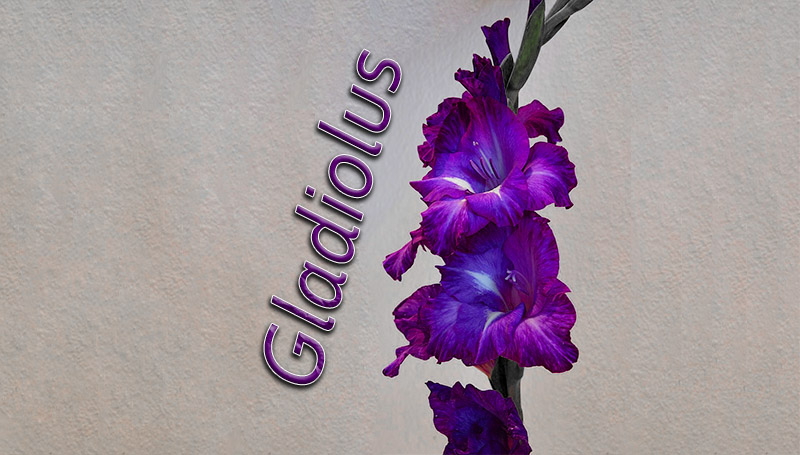 The gladious flower (plural gladioli) is as rich in symbolism as it is in color. This beautiful bulb (technically a corm) flower conveys a compelling spiritual meaning. Additionally, a gladioli very well be a powerful omen in the right circumstances.

What marks the presence of gladioli in your life as significant or not is only for you to discern—did a loved one provide them as a gift? Or, perhaps you walked past them on the street and they caught your eye? They are mighty eye-catching, aren’t they? Maybe you noticed them for sale at the grocery store? Well, for whatever reason, you feel as though there might be a message there.

The very first thing that stands out as significant when investigating the symbolism of the gladiolus flower is the name. In Latin, then name “gladiolus” means “little sword”. While the plant’s flowers protrude upwards in a long stem, that is not why they are named after swords. Actually, the plant gets its name from the leaves, which genuinely do look little Roman swords. It makes perfect sense. In fact, one of the gladioli’s common names is “sword lily”.

So, what can we discern from the meaning of the flower’s name? Well, naturally swords are weapons, designed to do harm and defend from harm. However, a message of violence is not really part of this flower’s spiritual meaning. Actually, it is quite the contrary. This is because the flower is strongly associated with love.

How does this pair up with its association with the sword, though? Well, the sword-like leaves are supposed to pierce the heart. But, not literally of course! Instead, they pierce the heart with love. Therefore, the gift of gladioli flowers is certainly a powerful symbol of the love between two people.

Symbol of Resurrection and Rebirth

It is typical for us to associate spring flowers with rebirth. But, the gladiolus is not a spring flower at all. In fact, it can flower quite late in the summer and even continue into the autumn.

So, why is the gladiolus associated with rebirth even though it is not a spring flower? Well, because it grows from a corm. A corm is an underground storage organ similar to a bulb that stores energy while the plant is dormant. This means that, during the winter, it might seem that the gladiolus is completely gone and dead. However, when the time comes new sword-like leaves will sprout from the ground and the plant will seemingly be reborn.

So, as a personal message, you can take the gladiolus flower as a reminder that even when it seems as though something important to you is over, there is always a strong chance that thing can come back to life.

Gladiolus, a Symbol of Africa

While there are gladiolus species native to many parts of the world, it is pertinent to be aware that the gladiolus is—originally—an African flower. Its center of diversity is in South Africa. This means that the flower first evolved there. As such, we can use the gladiolus flower as a symbol for Africa.

In the 1700s, English aristocrat Mary Wortley Montague conceived of “birth flowers”. Like birth stones, each month of the year has an associated flower. A person born in that month is then believed to take on some of the properties of that flower. The gladiolus flower is the birth flower for August.