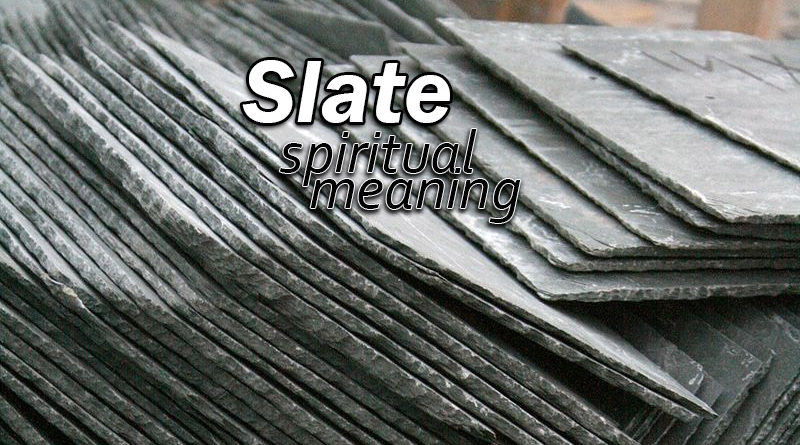 Slate – wondering about its spiritual meaning? Well, typically when we wonder about stone and what it means we’re thinking about flashy gemstones like emerald, citrine, aquamarine, topaz, opal—the list could go on and on and on. But slate, by contrast, is so dull and gray and—ostensibly, at least—boring. However, slate admirers like us know why we like it. Its range of color is not so limited, it can be purplish and blueish and just about every shade of gray. Additionally, it is so tough and strong across its top, but can be so easily split along its more brittle flanks.

So, what does slate mean? What sort of symbolism does slate have? And, can we take the presence of slate in our lives as a sort of message or omen?

Slate and the Passage of Time

Above all else, slate is about the long passage of time. Not only does it take time for rock to transform into slate, but also it breaks away in broad, flat sheets. That flatness is emblematic of time drawing out in front of us and behind us.

So, when slate presents itself to us—in any form, literal or even in the form of art or perhaps conversation—then it is time to consider the passage of time. First of all, reflect on the past and what it means to you. Second, think of the future and imagine how it will be. While some omens come to us as messages to attempt to influence the future, slate does not. Rather, slate simply asks that we appreciate what has come before us and what will come after. Seek peace and tranquility in relation to the passage of time.

Slate and its Connection to our Lives

Slate also can be applied to the human condition. With the right treatment, it can be strong and enduring, i.e. when placed flat in a protective sheet as in roof tiles. However, when worked from another angle, slate splits easily and cleanly along its lines. Much like our lives, we can be strong when we put our strong face forward to the world, but when an attack comes from the wrong angle, it can certainly weaken and even break us.

So, if you are experiencing a period of duress, slate can remind you that if you put your toughest side forward then you will be able to resist the challenging trials of life.

You might remember the different types of rock from your school days? Igneous, sedimentary and, of course, metamorphic. Slate is the quintessential metamorphic rock. This means that slate began as one type of rock, but over time as it was impacted by the influence of heat or pressure. This heat and/or pressure fundamentally changed the rock from one type to a distinct new type of rock.

As such, slate represents transformation. But, more than simply representing transformation, it specifically represents traumatic transformation brought on by excessive duress. So, when we apply this to our lives, we should consider slate as a symbol of survival through the tough times. Sure, the heat and the pressure might fundamentally change us. And, gosh, the change might be rough at times. But, what we become afterwards has every chance of being good. Challenges can turn us into something strong, dignified and useful. Just like slate.

Slate breaks away in broad, flat sheets. Therefore, it represents a broad horizon, i.e. a broad perspective. This means that slate shows us that we should look out on the world and take in the breadth of its experiences. More importantly, consider the wide range of other people’s perspectives. In doing so, we are better able to resolve conflict with others and exist in a tranquil state. And I can’t think of a more tranquil and peaceful rock than slate.

Slate is also emblematic of usefulness, utilitarianism, and pragmatism. Because slate so easily breaks away into flat sheets, it has been used throughout history for a variety of purposes. The first thing that might come to mind is slate roof tiles. But, that isn’t slate’s only use. In North Wales where slate is ubiquitous, you will see slate used just about everywhere. In fact, slate is used as paving slabs in Welsh sidewalks. Also, consider those pretty Pinterest posts about stacked slate flowerbed edgings.

So, what does this mean to our personal journeys? Well, the meaning is quite simple: be like slate, be useful. But, it’s not just about being useful, it’s about going with the flow to allow your strengths to benefit others. If somebody needs you to, like slate, break away from something do them a favor then take it under consideration. Yes, it is dangerous to allow people to take advantage of your altruism and thereby cause you harm. However, if it all possible to do so safely, use your strengths to help others, especially when it comes to providing shelter (like a slate roof tile).

How to Purify Your Slate

When it comes to working with stones—whether they are precious gems or something more drab like slate—you might want to take the time to purify a favorite stone.

Slate is no different. Slate can be purified by placing it under sunlight, moonlight, or by placing it side-by-side with a piece of quartz.