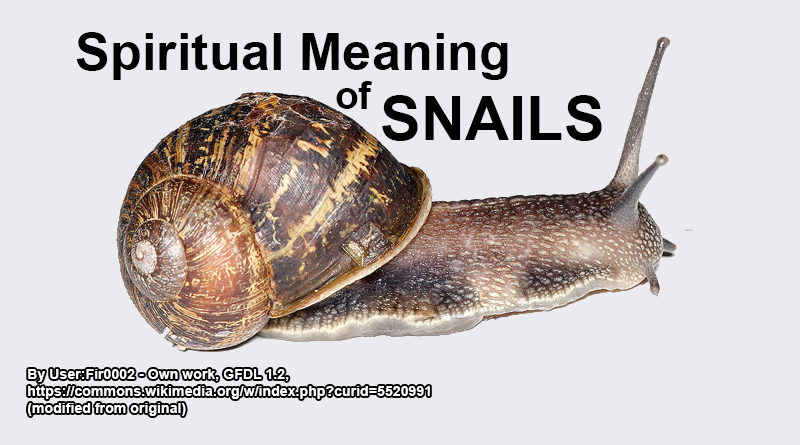 What is the spiritual meaning of seeing snails regularly in every day life? Sometimes signs come to us in the form of real, living snails. Other times, we might see snails on TV, in books, video games, or paintings. Regardless, if you see enough snails, you might start to wonder: is this significant?

Snails are slow. Famously slow. Other than their shells, their lack of speed might arise as their defining feature.

So, what could the slowness of snails mean to you? Well, first of all, it could mean you need to take a leaf out of the snail’s book and the slow the heck down. If you’re rushing into decisions, or perhaps rushing a task, the frequent sighting on ponderous snails might be a message to you to reconsider your pace. After all, sometimes slow and steady wins the race.

But, on the contrary, if you feel as though things are chugging along at a steady pace then don’t stress out. There might be people in your life telling you to hurry up, get it done, etc. However, if progress is being made at a reasonable pace (to you, that is), then don’t fret. The snail might crawl slowly along the ground, but if you stay and watch it you’ll soon see: the snail gets to where it’s going!

Be Kind, Be Patient

The slow snail is also a symbol of patience. While it could be a sign that you need to be patient with yourself, it is more likely a message to be more patient with your loved ones. Don’t badger people unnecessarily over trivial matters; instead, trust that they will get the job done. And, if they need support, give them support. Not criticism. Not rushing.

While there are predatory snails—like the aquatic assassin snail—most snails are strictly herbivorous.

As such, the constant appearance of snails in your life might be message about diet. Specifically, are you eating enough vegetables? It’s a question we all need to think about, are we eating enough greens? Well, the snail might be there to gently remind you to add vitamins, minerals, and essential fiber to your diet. Trust the snail, the veggies will really make you feel better—you’ll be more energetic, clearer minded, and better able to achieve your goals!

It might go without saying, but snails—with their calcareous shells—are major symbols of defense and protection. When snails capture your attention, a message that may resonate is one of protection and/or defense. If you are feeling attacked, whether directly or indirectly, the snail can be here to tail you to remain resolute in your endeavors. After all, you have a tough exterior that will help protect you from the outside world. Depend on your own defensive strength to succeed.

Sometimes, though, snails need to save themselves by retreating into the sanctity of their shells. As such, consider this option in your own life. Weigh the situation and reflect on whether or not retreating into a secure position is the right thing to do. Because, snails aren’t always in their shells, and neither should you be. However, when the time comes, a snail knows when to focus on protecting itself. Trust your judgement, retreat when required.

Some snails, like the aquatic Japanese trapdoor snail, have “doors” on their shells allowing them to close off completely. So, naturally, consider this in your own life. In extreme situations, you might need to shut yourself off from the world while you wait out a bad situation. However, this is extreme and only meant for the most dire of situations. If some self time is required, though, it’s nothing to be ashamed of. Sometimes focusing on yourself, and doing so alone, is the right course of action.

Also, trapdoor snails might come to you as a sign to close the door on a dangerous individual in your life. This means you should take time to analyze the relationships in your life and consider how healthy those connections are. For example, are there people in your life that only bring you negatives? Well, reflect on pulling back from those types, and perhaps even consider closing the door on them.

The trapdoor snail has a final meaning: the closing of the door on the past. By moving on, and closing off the door on past distress, the trapdoor snail is able to relax and move on. So, maybe you also need to consider moving on in life? Is there something from your past looming large over your present and even your future? Well, be ready to receive the snail’s message and close the door on finished chapters in your life.

Snails: A Symbol of Strength!

And that shell, and that trapdoor, make the snail as a strong creature indeed.

Remember, too, that the snail’s shell is tough. Given access to the right nutrients, the snail will grow itself a tough, tough, tough, outer shell. As such, the snail is a symbol of enduring, wise, and defensive strength. Therefore, consider that snails appearing in your life could be a message to buckle down and rely on your inherent strength. Use that strength, you can overcome!

Snails: A Symbol of Delicateness

Conversely, snails can also—simultaneously—be symbols of delicateness. Take note, the use of the word delicate over weak. Because, as mentioned previously, a snail’s shell is strong and so the snail is strong. It is not weak. However, the snail—while out of its shell only—is a gentle, and ultimately, delicate creature. As such, consider the snails in your life as a possible reminder that, while you do have the strength to succeed, that doesn’t mean you should allow your delicate core to be risked in dangerous situations. Therefore, consider the relationships in life, consider your career, and even consider your hobbies. You’re looking for something in life that might be damaging to your more tender aspects. When you identify something that might be damaging you, consider changing that habit or removing that obligation.

Snails: A Symbol of Sight

Another defining feature of many snails species is their eyes. More specifically, their eyes on the ends of stalks. What does this symbolize to us when we see them? Well, having your eyes on the ends of stalks means you have a vantage point. So, in your life, consider stepping back and looking at any issues you might encounter from above, i.e. take a broad view of them, look at the battlefield from overhead.

Many snail species are hermaphroditic. So, they have both male and female reproductive organs. As such, the snail can highlight the lie that gender is in any way set in stone. Whether you’re male or female, maybe you should reexamine what your sex or gender means to you. Have you denied yourself opportunities based on what is expected of a male or a female?

There are species of pond snail that reproduce asexually. This means that no sexual activity takes place at all. The female snail is able to, essentially, clone herself as way of ensuring the survival of the species. This can be seen as a message to us that—while it might be nice to have a partner—we should be able to rely on ourselves. Maybe you’re depending on somebody—especially a member of the opposite sex—to help you achieve something? But they’re not pulling their weight? Well, snails bring the message that it might be time to reconsider the value of that relationship to you.

Snails are a symbol of wealth because their shells have been used as currency. Specifically, cowrie shells were used in Africa, China, and India as money. So, therefore, we can take the appearance of numerous snails as a sign that, perhaps, an excess of currency is coming your way.

Furthermore, snails represent abundance. This is because they partake in the earth’s bounty freely; they do so by eating plants. Energy radiates from the sun, to the leaf, and from the leaf to the snail—easy. So, whenever life feels like a struggle (especially finances), remember that, ultimately, nature provides everything we have. You, like anybody else, are entitled to the bounty of energy and, thereby, abundance that the sun and the earth provide.

Snails: A Symbol About Homes & Houses

Lots of animals build nests or dens: birds, chimpanzees, beavers. But, few animals build a house they can take with them wherever they go. So, considering that, snails represent mobility. A snail communicates a message of ingenuity with regards to home, i.e. making home go with you wherever you go. So, if you’re thinking about traveling or moving for a job for example, then learn from the snail. Don’t feel too attached to your home where it is now, open your mind to the truth that you can take home with you… wherever you go!

These numbers can made into adjacent rectangles that interlock. Then, we run arcs through the rectangles. The arc, in turn, creates what we know as the golden spiral or golden ratio. We find this sequence all over nature, from the shape of galaxies in the universe to the way pine cones are formed. Another place we find that sequence is in snail shells.

The spiritual or symbolic significance of the golden spiral is debated. Though, some believe it to be evidence of intelligent design in the universe. As such, we could take the beauty of a snail’s spiral shell to be a message from our creator.

The Meaning of Snails & Color

Most land snails are brown, likely intending to blend into their backgrounds to avoid the watchful eyes of predators. However, one snail common throughout Europe, the grove snail, is quite a vibrant yellow color.

Yellow is the color of the third chakra, the solar plexus. This chakra is located a few inches above your naval. It is also called “manipura” which translates to “lustrous gem”. A rich yellow grovesnail might just catch your eye with its color, just like a lustrous gem would! So, perhaps the appearance of yellow snails in your life is a message to focus on your solar plexus chakra?

To address issues with your third chakra you should reflect on your very core, i.e. your personality and how your personality guides your interactions with others. Also, the manipura is about self-esteem: are you valuing yourself highly enough? Do you love and respect yourself? Consider it.

It is thought that spending time in the sunshine can help unblock the solar plexus chakra. Furthermore, the consumption of yellow foods is believed to help—try bananas, pineapple, corn, yellow peppers, and lemons.

To learn more about how to balance your chakras, read our complete guide here.

The ancient Aztecs—or Mexica, as they referred to themselves—believed a member of their pantheon, Tlāloc, sometimes took the form of a snail.

Tlāloc is the supreme god of rain. Additionally, Tlāloc represents water and also the fertility of the earth. Therefore, we can consider the appearance of snails as a message that rain will come and food will grow from the abundant and fertile ground. So, if you are going through a challenging period and are struggling to provide for yourself and your family, try to remember that the earth itself will freely provide for you with its abundance.

In Chinese folklore, there is the story of the Snail Girl.

In this story, a young man rescues a river snail from dry land on his way home from working in the fields. He keeps the river snail in a large pot of water. After that, each day when the young man comes home from work he finds his house has been cleaned. So, he asks his neighbors if they are the ones cleaning his house. They all deny responsibility for the act of kindness.

Then, one day, he comes home to see his snail’s shell is empty and that a girl is cooking a meal for him. Then he realizes the girl is the snail. She transformed into a human to thank him for his kindness. They lived happily ever after.