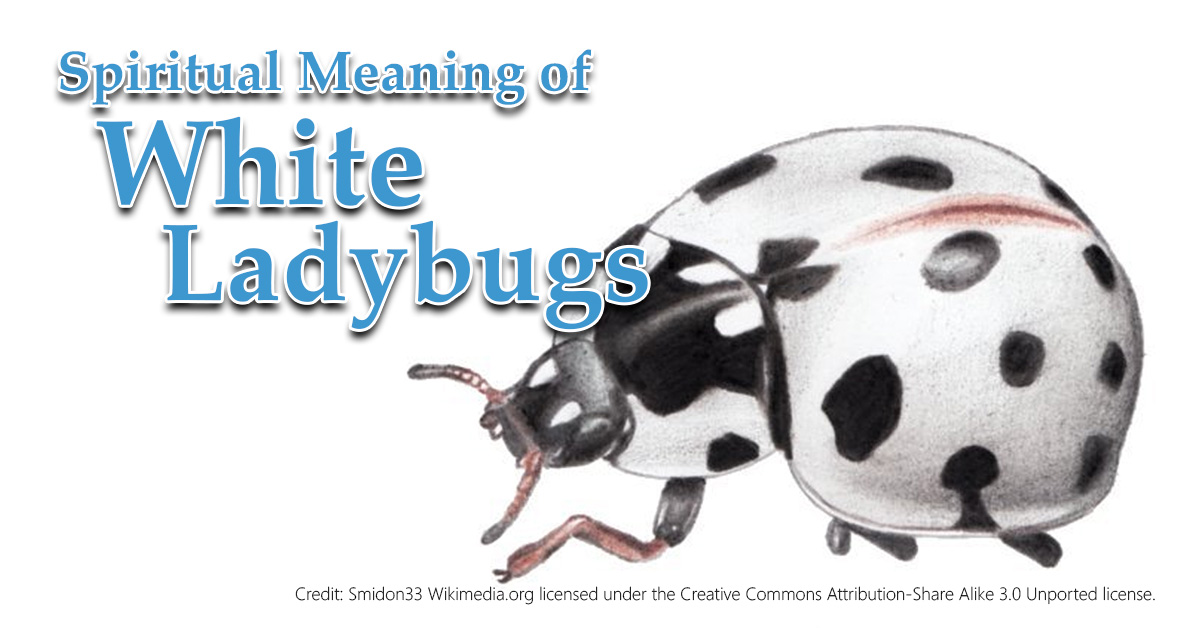 Have you seen a white ladybug? You might be wondering what that means.

Ladybugs (or lady birds, and sometimes lady beetles) are typically black and red bugs. But, sometimes you can find them in other colors. For example, there are some black and white lady bugs. So, if you’ve seen a white ladybug you might be wondering what the spiritual significance of that is. What are the messages, meanings, symbols and omens of having a white ladybug present itself to you? Keep reading to find out!

Understanding the Meaning of the Color White

As anglophones, we likely understand the color white to represent purity and cleanliness. In Western society, we see the color white used in weddings and at hospitals. Additionally, we associate white with the perfection of God—angels are typically portrayed in white.

However, in many Eastern cultures white is associated with death and sadness. Specifically, you will find white used at funerals.

So, what does this mean for how we see white ladybugs? Well, it depends on perspective. Depending on your feelings on the color white, it could mean different things. And this illuminates the power of perspective. Yes, we have consensus and trends in belief, but ultimately the meaning is for you to interpret.

What do “Regular” Ladybugs Mean?

So-called regular ladybugs are black and red. While white ladybugs are special and can feel like a profound sign from the other side, it’s important to remember that the meaning of standard ladybugs forms the foundation for their symbolism.

So, what do ladybugs symbolize? And what messages might they be bringing us?

Like many insects, ladybugs undergo a larval phase which is unrecognizable from its final form. However, unlike other creepy crawlies, ladybugs transform into something beautiful. Whereas, other bugs might transform from an ugly grub into an ugly bug! But, of course, that depends on opinion (no account for taste). So, this means that a ladybug can be a message that a particular moment in your life might feel ugly, but ultimately it will transform you into something beautiful.

Also, ladybugs can symbolize bravery and adventure. The way ladybugs take flight in search of their desires is a message to us to do the same. Don’t hold back in taking action to realize your hopes and dreams. Their ability to fly also communicates a connection between the earth and air elements. Remember, ladybugs prey on other critters that can kill plants. So, ladybugs are a friend to green things and therefore the earth. Yet, they are also masters of the air and long distance travel.

The Spiritual Significance of White Animals

The Lakota Sioux believe a white buffalo to be an omen for coming abundance. During a time of famine, two young men went in search of food for their people. While searching for food, the men happened upon a woman dressed in white. The woman, beautiful in appearance, told the young men to return home and tell their people that she was coming. Afterwards, she rolled on the ground, changing color as she did. Ultimately, she transformed into a white buffalo calf and then disappeared. After which, a great herd of buffalo appeared.

It’s true that the red color of ladybugs is why we associate them with good fortune and prosperity.

However, when we consider the Lakota Sioux’s beliefs about white animals, we can actually consider a white ladybug’s message of prosperity as amplified in importance. So, if you encounter a ladybug and are in search of good luck, then take it as a message from the other side that plans are in motion to provide you with the fortune and abundance you desire.

Ladybugs are a powerful symbol for protection. This is especially true for babies. In fact, giving a ladybug gift to a newborn is considered a way to keep the baby safe. So, if a friend or family member has recently been blessed with a new addition to their family, then consider offering them an item of clothing with a ladybug on it. Or, perhaps, you could go with something fun like a ladybug rattle?

How do white ladybugs differ from red ladybugs when it comes to protection? Well, in Western society we see white as the color of purity, so it amplifies the message of protection towards newborn babies who are, of course, pure. Furthermore, the white coloration implies heavenly and divine protection over the baby.

White Ladybugs and the Virgin Mary

Prior to Christianity’s proliferation throughout Europe, the ladybug was associated with pagan gods. For example, in Scandinavia pagans believed that ladybugs were connected to Freya. In Norse mythology, Freya is the goddess of love, beauty, fertility and sex. As such a ladybug can symbolize all these things.

And what does this have to do with the Virgin Mary? Well, when Christianity came to Europe some of its important figures were grafted onto existing pagan figures. So, ladybugs had originally represented Freya, but also came to be a sign of the Virgin Mary. This harks back to the ladybug as a symbol of protection over babies. And when we think of a white ladybug, then its “pure” color can indicate the divinity of the Virgin Mary.

Again, remember that ladybugs were originally associated with the goddess Freya. According to the Norse tradition, Freya is the goddess of love, beauty, fertility and sex. So, if a ladybug appears to you, then it could be a sign of incoming or growing love. It could also symbolize fertility.

Regarding marriage specifically, if a ladybug lands directly on a woman’s hand, then it suggests that the woman will be married within the year. So, consider a white ladybug! The color white is, of course, strongly associated with weddings. So, should you encounter a white ladybug in such proximity then maybe it’s time to start picking out dresses and considering a honeymoon destination!

Black and white, dark and light; a comparison of the black and white ladybug and the Daoist Yin Yang symbol is natural.

So, for those unfamiliar with the Yin Yang I recommend watching the following TED-Ed video on YouTube.

When understanding Yin and Yang we are able to understand the order that arises from the dark and light sides of everything. Simply put, the white ladybug could be presenting itself to you as a message to explore the philosophies of Daoism (sometimes spelled Taoism). Moreover, perhaps Daoist philosophy will bring the peace of mind you desire.

Other Types of Ladybug