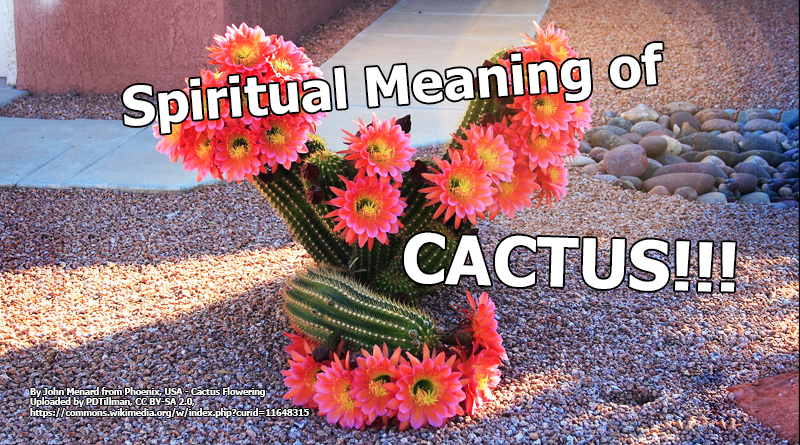 Wondering about the possible spiritual significance of seeing cactus? Is there an omen there? Or, perhaps, a message?

Well, we all wonder that sometimes. Especially about things that seem to present themselves in ways that seem attention grabbing. Perhaps your attention was drawn to cacti because no matter what you do, you keep seeing them? Drawings, paintings, TV shows, movies, ornaments, fridge magnets, or maybe even real life cacti? There can be a lot of ways a particular thing catches our eye. But, once it’s caught our eye, sometimes we start to wonder: well, heck, is there a message there?

So, what are the possible messages you might be receiving when you come into contact with cacti?

A cactus stands out, its very existence seems otherworldly, they proclaim significance.

After all, it’s a plant that thrives in the harshest of conditions. So, naturally, we ponder the plant’s importance—what do cacti mean to us? It’s not just that they survive that seems remarkable. It’s also that they do so in a way that pushes abundance where we might none exists; they’re filled with water, where it appears water is so lacking. Add to the riddle, their prickly coat of thorns! Cacti sure are unusual, but that’s not all, they’re kinda beautiful too!

So, let’s get into it! What does their perseverance, water storage, prickly armor, and peculiar beauty mean? Read on!

Symbolism: Cactus Plants and the Desert

What can we learn from cacti with regards to their ability to survive and thrive in harsh, dry, and hot (and sometimes cold) environments?

Well, if you’re going through a tough time, and you feel as though the cacti in your life are communicating a message, then it could be that you’re gonna be okay. You have the toughness to not only survive your challenging surroundings, but you can master them too!

The way cacti store water is also an important message to us. Perhaps resources—money, food, water, even love—are thin on the ground. In times like that, we might feel like we don’t have enough to get by. But, the cactus can be a sign that it’s possible (no matter how tough), to scrape together what you need to get by!

But, don’t settle for scraping by. Be like the cactus! This desert master puts together so much water that it is literally bursting with the stuff. A cactus exists in a desolate world where so little water is available, but it somehow manages to find enough for itself and enough to reproduce and dominate the landscape. You too can survive, and once you’re steady, you can go on to thrive and achieve all your goals!

But remember, while the cactus is able to thrive in a tough environment, it has to do so in a way that is protective of itself. As a plant that hoards water, it has become a target for thirsty competitors in the tough desert environment. So, what can we learn from a cactus’s thorns? While it is good to share what we have, it’s also important to protect ourselves and our loved ones. As such, cacti have evolved thick, stabbing thorns.

Thinking back to what we’ve learned so far, there is a common thread throughout: adaptability. First of all, cacti are adapted to survive in the desert. Also, they evolved to hold onto the water they find and store it for a rainy day (or, should I say: many, many, many dry days? HA!). And, don’t forget, they developed thorns to protect the water they found.

So, what does that mean to us silly humans? It means we should adapt too. No matter how tough our situation might be, we can turn it to our advantage and survive!

While beauty is, of course, an especially subjective matter, it can be argued that cacti possess a pleasant aesthetic. That is, they are beautiful and also unusual. This is why so many of them find their ways into our homes. We admire how odd they look when compared to other plants.

So, if you are feeling insecure about your appearance, then think of the cactus. Perhaps its spiritual message to you is that all things are beautiful, regardless of convention.

The Aztecs and Cactus

The Aztecs—or, as they called themselves, the Mexica—believed two three came together to determine the location of the birth of their civilization. First, there was the eagle. Next, the snake. And, finally, the cactus! The Mexica people built their city where a golden eagle was witnessed, sitting on a prickly pear cactus, eating a snake. This is why, today, the Mexican flag and coat of arms features the image of a golden eagle, eating a snake, while perched on a prickly pear cactus.