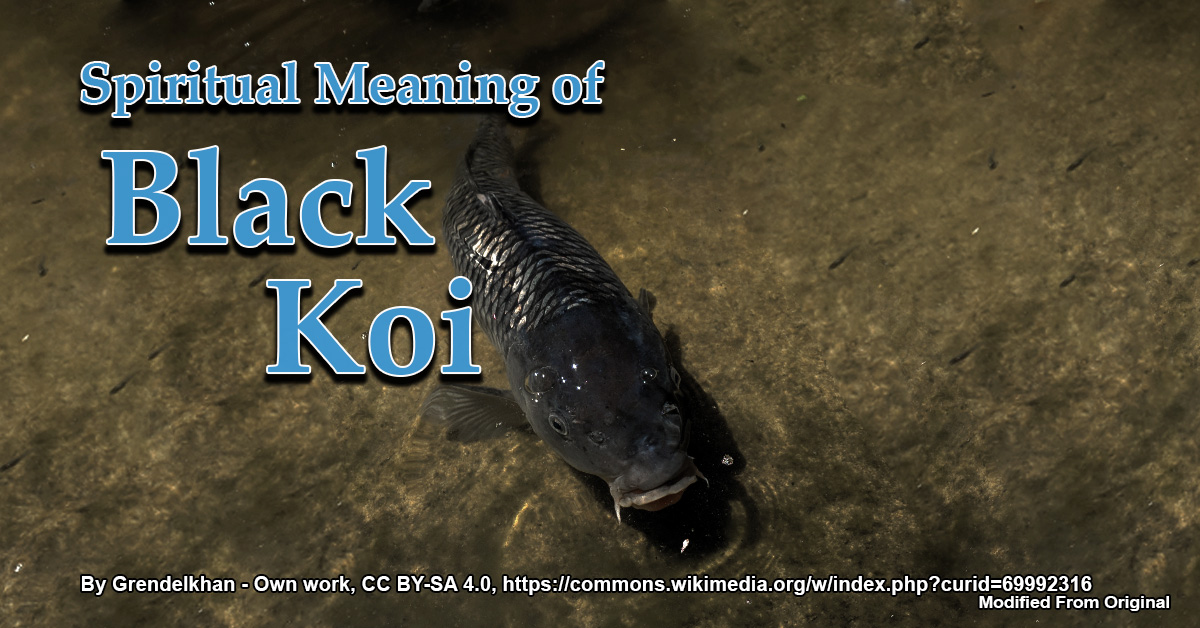 Black koi fish and beliefs, meanings, and symbolism associated with them.

First of all, what is a black koi fish?

To begin with, koi are domesticated carp. But, they are more than simply wild carp kept in captivity. What makes koi fish special is the broad range of colors they come in. In the wild, these colors don’t exist; that is because, over many generations, we have selectively bred color mutations to create different strains. For example, the most famous strains of koi are red and white (kohaku) and the white, black and red varieties (sanke and showa).

What About Black Koi Though?

But, we’re here to learn about the meanings associated with black koi. So, what are black koi? Often they are simply known as “karasu” (鴉)—Japanese for crow. However, they are also known as karasugoi—the “goi” at the end is the same as “koi” but pronounced slightly different because of its placement after another sound in the word. So, literally, karasugoi means crow koi!

In General, What do Koi Symbolize?

In Japan, koi fish symbolize good luck. They especially represent good fortune, i.e. materially and financially. Additionally, koi stand for perseverance in difficult situations; koi fish are believed to persevere and use their strength to live up to their purpose.

In spite of being a Japanese fish, the most famous legend associated with koi is actually Chinese.

Predating history, a Chinese story tells of a group of vibrant fish. This school of carp swam up the majestic Yellow River, against the stream. Going against the current is tough, and this highlights the strength and determination of carp.

Eventually, the school were confronted by a tall waterfall. Some of the group were discouraged. They found the waterfall insurmountable. However, others stuck with the challenge. The remaining carp tried, relentlessly, to jump up the waterfall in a desperate attempt to reach the top.

The sound of splashing caught the attention of local deities. These powerful tricksters, observing the devoted carp, decided to spite the fish by making the water even taller! However, the carp were not deterred. In fact, the fish intensified their efforts to reach the top of the waterfall.

The legend tells that the most determined fish continued for a hundred years without giving up. And, after those hundred years, a single fish from the group finally made it over the top! The gods witnessed this fish’s triumph. As a reward, the gods blessed the fish by transforming it into a golden dragon. Ever since, that golden dragon has flown through the sky above, forever in search of wisdom.

Ever played Pokemon? Well, in the Pokemon video game there is a particular Pokemon that represents this legend. The fish Pokemon called “magikarp” is a koi fish inspired creature that eventually transforms into a Chinese-style dragon.

What About Black Koi Specifically?

Black koi—karasugoi—come, like any koi, with all the meaning and symbolism of any koi. They represent strength, determination, abundance and good fortune. However, their solid black coloration has additional meaning. Black koi are believed to be good luck, even more so than other varieties of koi.

Every Koi Pond Needs a Karasugoi!

In Japan, it is believed that black koi absorb negative energy, evil, and bad spirits. As such, every koi pond should have at least one black koi. The black koi is believed to protect the health of the other koi in the pond. It does this by absorbing the bad luck and bad spirits that cause sickness and ill health. This protection extends to the fish’s owner and their family.

Furthermore, the black color of a karasugoi provides balance in opposition to the bright colors of other koi varieties. To understand this, think of the Daoist yin and yang symbol and, even more so, what that symbol represents. Put simply, it informs our understanding of and appreciation for the universe through dark and light. So, your koi pond should follow this philosophy also. Without the darkness (and protection) of the karasugoi, the brightness of the other varieties cannot exist comfortably. This discomfort prevents the full appreciation of the brighter colored varieties.