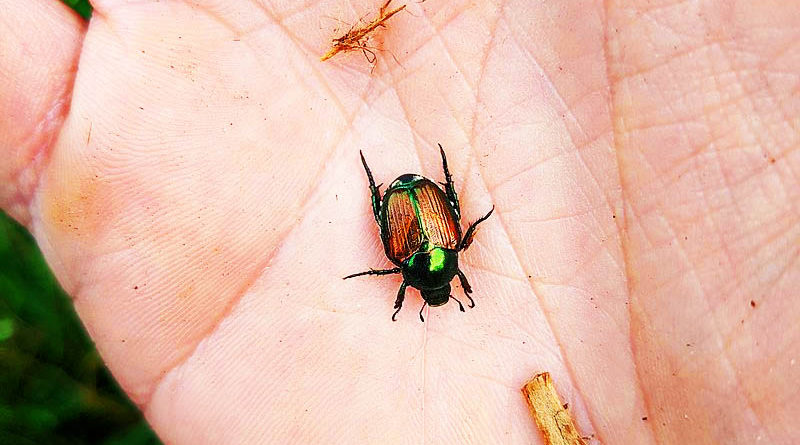 One of my fondest childhood memories was spending the night over at my grandmother’s house. Breakfast was always amazing! But, there were chores to do as well. One of the most memorable chores my grandmother did was removing Japanese beetles from her garden every morning in the summer. (Which if you are into organic gardening, dropping them into soapy water is a fantastic way to handle them!) Still, what I remember most was simply just how many there were day after day. And, how they seemed to be pretty much everywhere.

This is one of the most vital messages to take from the Japanese beetle. They are abundant and can eat nearly anything. In fact, they can eat over 300 different types of plants and trees. Too many of them can easily decimate a garden or farm! The Japanese beetle reminds us that it is important to maintain balance in life, throughout any changes we might face. Where can you find more balance in your life? Are there changes you are currently going through that might need more of your attention?

Positive Omens of the Japanese Beetle

Well, one of the most obvious traits of the Japanese beetle is the abundant number of them at times. So, you can definitely expect abundance to come into your life if you encounter one! Beetles are also strongly associated with the earth. As a result, you might see more stability and support come into your life in the near future, especially in the form of tangible abundance. In other words, this could mean financial opportunities and fortune is on the way to you. There’s no more positive omen than that!

Another thing to consider is the color of the Japanese beetle is usually green. The color green is associated with the heart chakra and love. This might mean you can expect a new, abundant love to enter into your life very soon! This could also mean you might want to pay more attention to keeping your heart chakra open. Check out our chakra guide if you’re interested in learning how to keep your heart chakra balanced and open to new love.

Negative Omens of the Japanese Beetle

As mentioned previously, the symbolism of the beetle goes back to ancient times across many different cultures. One of the more common themes the Japanese beetle is connected to is the concept of death and immortality. For instance, if all of your crops are destroyed by the beetle, it’s easy to link them to death. However, they are generally linked to death since certain species of beetles would lay eggs among decaying matter. Therefore, they are easy to associate with the cycle of death, resurrection, and rebirth.

But, whether the Japanese beetle is good or bad luck varies depending on the culture. For example, in some cultures there are superstitions that if a beetle of any kind crawls over your shoe you might expect death soon. That’s a pretty serious concern and negative omen!

Still, rest assured that seeing a Japanese beetle is usually not considered a sign of impending bad luck. Death is not the end in most cases. It is just a natural part of life, a transition that allows for more growth to come into our life. Like the seasons transition, we must allow certain areas of our life to end to welcome new beginnings!

Is It Bad Luck to Kill Japanese Beetles?

In a practical sense, the Japanese Beetle is actually an invasive species in the United States after they were accidentally brought from abroad in the early 1900s. They are quite destructive to native plants, so it might be necessary to kill them, especially if they have taken over a garden. In cases like these, benefit would outweigh the cost. But, what about finding one in your home or your apartment where there’s no concern?

Well, from a spiritual perspective, whether killing a beetle is good or bad luck really depends on who you ask. For example, in some countries killing one is said to make it rain. Which can actually be an incredibly good thing if you’re in a drought! In others, it’s believed to be bad luck if you kill one if it enters the home while you are seated. But, if the Japanese beetle represents abundance and strength, you might want to allow that energy to exist in your home without harm. Still, only do so if there is no concern to your houseplants, Japanese beetles love to eat!

Have you had a memorable dream about Japanese beetles? No worries, this is fairly common! As with any dream it is important to pay attention to the surrounding factors in the dream and, most importantly, how you feel. Beatles in dreams can often represent feeling overwhelmed, or a call to pay more attention to important factors you might be overlooking. However, dreaming of a Japanese beetle can actually be a good thing!

Since Japanese beetles are green, they are a representation of abundance and love. So, it’s important to pay attention to the context of how they appear in a dream. For example, if one shows up by surprise you might expect love and money to show up quite unexpectedly in your life soon! If the Japanese beetle is large in your dream, this might mean it will show up in a very big way. And, if there are an overwhelming number of them, this might mean an abundance of abundance! You can’t go wrong!

However, if your encounter with a Japanese beetle is rather negative in a dream, you might want to pay attention to where you are blocking abundance and love in your life. Are you truly open to receiving abundance or do you have limiting, negative beliefs you might need to work on? Are you allowing love into your life, or is fear of rejection holding you back?

Spiritual Advice From the Japanese Beetle

Overall, it is important to remember that Japanese beetles have a strong link with the earth. So, when a beetle appears in your path it is a reminder to stay grounded. They are a reminder to stay strong and firm in your beliefs and dreams. Take realistic steps to achieve your goals and keep your heart chakra open. Remain loyal and steadfast and soon abundance and love will easily be yours! You are on the right path.