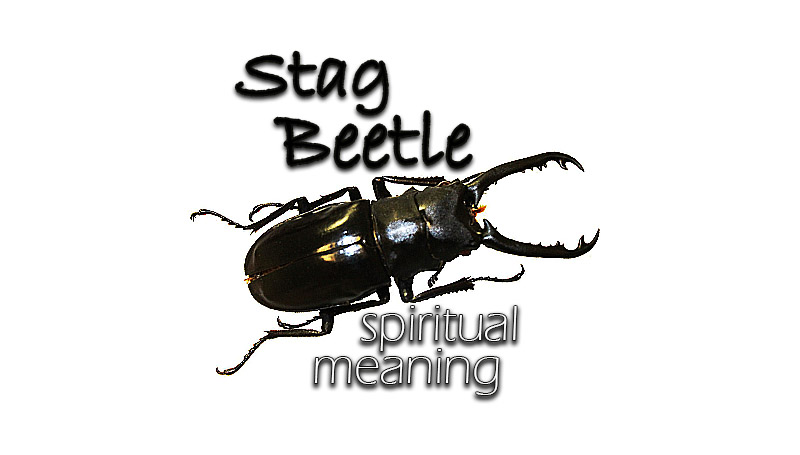 Stag beetles—they’re eye-catching critters. So, it’s only natural that when encountering them you might wonder about the spiritual and metaphysical meanings associated with stag beetles.

When we think of stag beetles, we think of those big, monstrous mandibles. Well, it’s important to learn that only the males are in possession of the oversized mandibles. Therefore, the stag beetle (as we know it) is inherently associated with excessive demonstrations of traditional notions of masculinity.

Whether this spiritual symbolism of maleness is a good thing or a bad thing depends on your context and perspective. After all, the stag beetles antlers are for “fighting”. And sometimes all but the most ardent pacifists would admit that (as a last resort) fighting is necessary to defend yourself and your loved ones. So, a stag beetle could be a sign to depend on and appreciate the males in your life that help protect you.

However, on the other hand, that masculinity often borders on toxicity. Violence and aggression are never good. And stag beetles are violent and aggressive creatures. Well, the males are when it comes to competing for mates. So, think about the men in your life and ask yourself, are they excessively aggressive? If so, seek professional help in how to handle that possible threat.

While stag beetles are linked with masculinity, the truth is that the female of the species has the stronger bite. So, therefore, you can take a stag beetle (especially a female one) as a sign to focus on and take advantage of female strength. While males might often be showy and quarrelsome, the female of this species is gifted with a powerful bite and lacks the cumbersome appendages used for sparring.

The sign here is simple: just because you’re not showy, doesn’t mean you’re not strong in a quiet and dignified way.

Like lots of beetles, stag beetles like to eat rotting vegetation. For example, they’ll eat rotten fruit fallen to the ground. Also, they will eat leaves—but only if they’re dead and rotting. The same goes for wood; they can eat it, but it needs to be softer and rotting.

So, what does the diet of a stag beetle symbolize? Well, like any creature that consumes rotting material, it’s all about rebirth and eternal life. Animals that are so evidently linked with death and decay are always spiritual signs of eternal life through rebirth. This is because stag beetles take what is rotting and dying and process it before returning it back to Mother Earth. This allows new plants to grow and reuse the nutrients. This is life’s eternal self-renewal.

From our human perspective, stag beetles are all about fighting. After all, that is when these stunning bugs catch our eyes: when they’re locked in mortal combat. Therefore, naturally, stag beetles carry that spiritual association with combat.

But, it’s not just any old combat, it’s what we conceptualize as honorable combat. Kinda like the old Roman gladiators! That isn’t where the symbolism ends though. This is because stag beetles are probably more strongly connected to combat for love.

So, if you are entangled in a troublesome love triangle, then it could be the stag beetle is warning you that your two suitors might eventually lock horns! Watch out.

Cerambus, a figure in Greek mythology, was transformed into a stag beetle. Before he was transformed though, he had been a musician. In fact, he was such a good musician that the nymphs adored him. However, Cerambus grew arrogant and insulted the nymphs. So, to punish his arrogance, the nymphs transformed him into a lowly beetle.