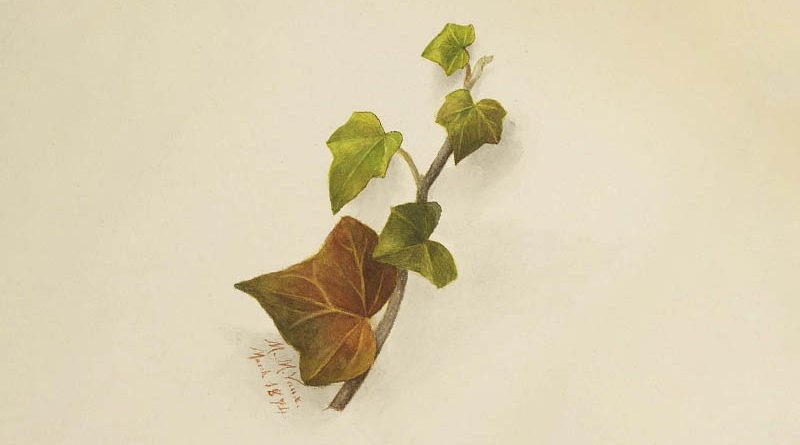 Ivy is rich with symbolic and spiritual meaning. Which, is nice. We want to see longstanding and historical spiritual and symbolic meaning in everything around us. However, the truth is that not everything has a traditional set of meanings behind it. But, don’t worry! We’ve got a lot to learn here about the cultural, spiritual, symbolic and traditional meanings and representations associated with ivy! In this piece, we’ll look at ivy’s link to fidelity, friendship, the passage of time, eternal life, and strength.

Ivies all belong to a single genus: Hedera. They’re evergreen, and creep either along the ground or climb up rocks, buildings, or trees. Also, they are generally woody—this means that as a stem or vine matures, it grows to be thick and wood-like, i.e. it has bark, if admittedly only a thin layer. You might not know that ivies do produce flowers and a sort of fruit. Although, ivy flowers aren’t really the pretty type of flower you might cultivate for your garden or include in an arrangement. The ivy’s flowers are tight yellowish/greenish balls.

Speaking on flowers, beware not to confuse ivy with clematis or convolvulus. All three are vines, and all three produce flowers. However, convolvulus and clematis produce blooms that are more akin to what you might expect when you think of a flower in your mind. The clematis has large, unfurled, colorful petals. Whereas, the convolvulus produces dandy trumpets. Another flowering vine not to be confused with ivy is, of course, the passion flower. Also, the ivy is identifiable by its thicker, woodier vines.

Is Ivy a Good Omen or a Bad Omen?

Generally speaking, ivy is a very good omen indeed. It conveys a message of absolute, resolute, unshaking devotion and loyalty. This is both in romantic and platonic terms. It also applies to family members. Ivy comes to you as a significant sign to let you know that you have the loyalty of people around you.

Additionally, ivy is also a good omen because it stands for evergreen endurance. This means that what matters to you, will last. Not only will it last, but it will also continue to grow and be strong.

There is one, possibly, negative aspect to the ivy omen. That is when the devoted, especially in romantic terms, is not welcome. It can be extremely difficult and uncomfortable to receipt of smothering, strangling affection when it is not reciprocated. This is important to remember no matter which side of the fence you are on. If you feel your affections are unwelcome, then it is polite and considerate to retract them. Also, if a person is being too clingy with you and you would rather not be treated that way, it’s important to be kind, but firm with your rejection of their approach.

Ivies creep, that’s what they do. Over time, they grow and cover things. Also, they do it in a clinging and choking manner. As such, ivy represents the slow and often insidious nature that malign forces can creep up you. It comes to us as a reminder that, if we let it, it will overtake us and consume us. Allowing negative forces to gain inch after inch in your life can, ultimately, see your hopes and dreams utterly sidelined. Ivy, like so many different types of vine, is happy to grow up and along you, so that it can eventually reach above you to take your vital dose of sunshine for itself.

So, how do react to this warning? Well, it’s important to focus on and meditate on balance. Taking too much from this message could result in feelings of insularity, i.e. selfishness. Altruism is important, but allowing yourself to suffer and shrivel away so that others can take more than their fair share isn’t right either. The ivy represents a message that you should carefully review your relationships and consider your own wellbeing on the same level as the wellbeing of course. After all, the world is teeming with abundance, and all can prosper.

Is Your Significant Other Cheating?!

On the other side of that coin, ivy represents loyalty. Moreover, it represents an old-fashioned and romantic sense of absolute devotion. While, nowadays, such devotion might be frowned upon or labeled “codependent”, in the past it was revered. And this is what the ivy stands for. If you are concerned about whether or not your partner is cheating on you or dedicated to you, then the appearance of ivy in your life can be taken as a message that they are, indeed, committed to you.

So, why does ivy represent loving devotion like that? Well, it is because it grows around you, hugs onto you, builds its roots with you and, as can be seen on old buildings, it sticks around for a very, very long time. After all, ivy is evergreen, and as such, it conveys everlastingness. If you let ivy grow, then it’ll be with you for life.

Also, ivy’s symbolism regarding devotion isn’t limited to passionate or romantic devotion. Ivy is all about stalwart loyalty. This is the kind of loyalty a soldier might need from his comrades. Or, perhaps, your best childhood friend has been there with you through thick and thin—ivy is a loyal, stubborn, connected and, unforgettably, an evergreen ally.

Speaking of being evergreen, we cannot overlook the importance of color in the symbolism of all things. Ivy is no different, it is green and that means something. While there is variation in the color of ivy between different species and strains, generally speaking, ivy is a dark, rich, and robust shade of green.

Green is a color that is absolutely inseparable from nature, i.e. Mother Nature. This is because the natural world is, from our perspective, essentially, green. As such, green represents the perfect cleanliness of nature. Moreover, green nods to the world’s absolute verdant abundance—no matter what happens, green things will break through and grow. If you’ve ever seen cracked asphalt with weeds growing through it, then you know this. And ivy is the perfect ambassador for Mother Nature’s relentlessness—ivy grows over and across all before it, even our dull, gray, buildings cannot resist its creeping and powerful growth.

Ivy Growing on a Tree Meaning

Ivy growing on a tree is an interesting spiritual symbol we might encounter. This is because it represents the natural world in competition with itself. Sometimes we lean towards thinking of the natural world as peaceful and harmonious. And, of course, in some ways this true. But, there’s a reality about the world outside of the supposedly safe society we’ve made for ourselves. That reality is one of ruthless competition.

That’s what ivy growing on a tree conveys. It communicates to you that, for better or for worse, we experience a life that engenders competition. Whether or not you want to embrace that is a personal choice. Some see the human experience as a journey towards overcoming the selfish desire to outcompete not only our fellow humans, but Mother Nature, too. Others among us might concede that “that’s just the way it is”.

The message is there for you to reflect on: do you want to be like the ivy and choke out the perceived competition to succeed? Or, do you want to grow as a human and favor compassion and altruism? It’s your choice.

Ivy growing on walls cultivates in us a passion for the past. When we see an old cottage in the countryside overtaken by ivy, we are immediately guided to think about the time in between. In between what, you might wonder. Well, the time between when the ivy was first planted, and when it eventually reached the eaves. Can you imagine the kind of lives lived during that time. Kids became grown ups, grow ups became parents, and parents became grandparents. In that time, the ivy crept over the old family home, inch by inch, time marched on.

And so, that’s what ivy grown across the walls of a building conveys—i.e. there is a compassionate, spiritual, intellectual and moral obligation to engage with the kindly people of the past. We are them, they are us, and after we’re gone, more will be. All the while, the ivy grows.

And What of the Ivy League Colleges?

It’s a good follow-up question, for sure. After all, the name “Ivy League” implies the importance of past time and the luminaries who came before us. Specifically, an Ivy League university is an older establishment than others, i.e. one that has experienced the passage of time and, as such, ivy has been able to grow over the walls of its buildings.

Ivy is believed by some to be a protective plant with regards to the pervasive impact of negative energy and ill wished upon you by others. As such, in times gone by, people would carry a live ivy plant with them. The reason for this was twofold. Firstly, the ivy was meant to ward off negativity and curses. Secondly, the ivy was actually meant to be bring in good luck! Whether or not, though, it’s practical to carry around a potted plant is up to you. Especially when you consider you can also just carry a piece of ivy jewelry or some other sort of badge, emblem, or trinket.

For the Ancient Egyptians, Ivy had a very special spiritual meaning. For them, ivy was associated with Osiris, who was the god of the dead. But, on account of their beliefs of the eternal afterlife, Osiris was as much about the eternal soul as he was about the end of corporeal existence. Because ivy is evergreen, it is the ideal plant to represent Osiris.

The Greeks and the Romans shared similar beliefs and, of course, shared gods. One such god was Dionysus, who was also known as Liber or Bacchus. Like many gods from that era, he represented a number of concepts. Among them were:

Ivy was one of the symbols of Dionysus. It is believed that ivy was associated with Dionysus because, like him, it is vigorous.

It’s important, when considering the meaning of a dream, to lay a clear line between psychological and spiritual interpretation. The meaning of your dream, from a psychological point, depends entirely on your perspective, experiences, and mental health and wellbeing. For such analyses you should seek professional, medical help.

However, if you are curious about broader and more spiritual meanings of symbols in your dreams, then you’ve come to the right place. In spiritual terms, to dream of something is often taken as a message from the other side. What the other side is and who exists there is a personal question.

So, what about ivy specifically? Well, it conveys a similar message and omen to the one it does in the waking world. It only changes in that it can be received more as a message from a specific source in your dreams. Perhaps a loved one trying to send message? It’s difficult to know. It’s something that depends, most of all, on your intuition. Also, when it comes to dreaming, you have to consider the importance of nighttime and the moon. This means that your experiences in a dream are often about deep and, often, secret emotions. Those emotions may be yours or somebody else’s.

The core meanings of ivy are devotion, loyalty, friendship, and evergreen endurance. Therefore, when it comes to the dream world where we receive messages from others, it can be taken, then, as a firm offering or reminder of devout friendship. It could be that a bond that is not able to be maintained locally is being maintained on the astral plane. This could be a loved one who has passed on, or it could be a friend you’ve fallen out of contact with or who has moved away.