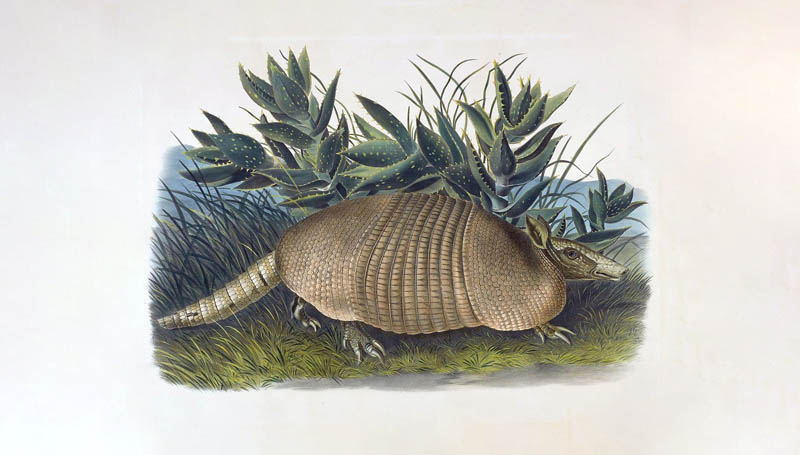 The armadillo, what omens does it convey? Also, what is the spiritual meaning of the armadillo. In this article, we look at the positives and negatives associated with armadillo omens. Also considered are the specifics of what this little critter’s armor symbolizes, as well as the meaning of the number of bands on its back. But, that’s not all—what does a dead armadillo mean? We can learn a lot from the armadillo, what messages and omens are being sent our way?

The armadillo conveys lots of positive omens and messages. First of all, this unusual mammal conveys a potent message of determination and self-sufficiency. It’s more than that though, because the armadillo also stands for the successful attainment of goals and manifestations. Additionally, the armadillo stands for the ability to defend yourself from attackers and to do so alone. Another positive omen associated with armadillos is the value of being grounded—it can foretell a reconnection with nature or it can be taken as advice from your guides to reconnect with nature.

Unfortunately, there are a number of bad omens associated with armadillos.

The most unpleasant omen associated with armadillos is that they represent or prophesize sickness and disease. While that is a negative omen for sure, it’s good to remember that omens can be taken as advice or warning. It’s a topic to reflect on and consider any potential risks in your life or the lives of your loved ones. Seek professional medical advice where appropriate.

The other major bad omen associated with armadillos is that they signify the end of things. Whether that ending is good or bad depends, though. It depends on your perception. Also worth remembering is that something new grows in the place of something else that has ended. The nine bands on the back of the armadillo represent the end of the cycle, but also the beginning of a new cycle. This is especially true when the little critter rolls up into a ball and creates a rounder shape out of its body.

It is unusual for a mammal to evolve armor, and that’s what makes the armadillo so eye-catching. The importance of the armadillo’s thick layer of protection in its symbolism cannot be understated. As such, the armadillo represents personal protection and, to a degree, a modicum of selfishness. Other symbols of strength through defense—like bees, wasps, bears, lions, etc.—stand for protection of the group or their offspring. Whereas, the armadillo’s tough armor is there to protect itself from predators. That’s not to say they don’t care for their young, of course they do. But, they pass down that armor to their offspring and each baby armadillo will, eventually, go on to live a solitary existence.

What spiritual advice can we glean from the armadillo and its fantastic body armor? Well, as much as we respect the unique perspective of others and should avoid judgement, there is a reality that some people are quite dangerous. Sadly, it is true that we can and do incur harm as a result of the actions of others. The armadillo tells us to put ourselves first and exclude malign forces from our lives.

Meaning of the Number Nine

There are different types of armadillos out there. Some have three bands on their back, while others have nine. However, if you’re in the US, then you’ve almost certainly seen a nine banded armadillo. Therefore, we should consider the spiritual meaning of the number nine and its connection to the armadillo.

In isolation, the number nine signifies the end or the approach to the end of a particular cycle or experience. It can also point to the achievement of goals, i.e. successful manifestations. But, when we think about the number nine in relation to the armadillo, then its meaning takes on extra significance. This is because the armadillo stands for relentless determination and dedication to achieving goals. Remember, the armadillo’s nose, eyes, and mouth all point downwards—this means it is 100% focused on its goal, i.e. finding food. So, the nine bands on its back represent achieving completion in your goals, while the armadillo’s determination amplifies that message.

So, if you have been chasing a goal or manifesting something considerable, then the armadillo conveys a message that you are approaching success.

Armadillos, an Omen of Sickness and Disease

When we’re talking about wild animals, we have to accept that they’re probably carrying some disease or other. So, it might be a little unfair to single out the armadillo as an omen of sickness. However, it’s a difficult spiritual warning to ignore. This is because the armadillo carries and suffers from leprosy. In fact, it can transmit that disease to humans. Therefore, the armadillo is a literal risk to your health, but it is also an omen of possible illness to come.

However, don’t feel too bummed out by this foretelling. That’s because so-called “bad” omens come to us not to frighten us or to lock us into a future from which we can’t escape. Quite the contrary, it’s a sign sent to you so that you can help yourself. Think about getting more exercise or improving your diet if you’re concerned about this omen.

Mother nature is always reminded us to be grounded. After all, everything grows from the earth and eventually returns to the earth—physically speaking that is. But, the earth and the sustenance and energy it provides goes beyond the physical. That is, it’s important to remember the spiritual value of being grounded and connected to the earth and all things natural.

Some animals are more significant symbols of groundedness than others. For example, bats, birds and bumblebees aren’t great messengers for the earth spirits. On the other hand, we have animals like gophers, moles, and groundhogs—can you think of a more grounded existence than what those cute little guys experience?

Well, the armadillo falls into the grounded category too. Sure, some of them dig burrows to shelter in. But, it’s more than just that. The armadillo’s nose, eyes, and mouth all point into the soil. This is because that’s where he or she eats.

So, of course, the armadillo can come to you to trigger reflection. Do you feel ungrounded? If you’re new to the concept, being ungrounded is a feeling that you just kind of learn to recognize in yourself. You feel quite “spacy” at times, or you feel “out of it”. Also, you might be averse to going outside and interacting with the natural world. Instead, you prefer to gorge on video games, TV shows, and movies—maybe you’re always on your phone? It could even be that when you have to go outside—to walk the dog, for example—you take your phone with you to read Facebook instead of appreciating the blades of grass beneath your feet, the breeze on your skin, or the rustle of the leaves overhead.

If you’re a believer in the chakra system, then it could be that you are suffering from a blocked root chakra. If you do feel like your root chakra is blocked then you’re definitely ungrounded.

The following is a list of signs of a blocked root chakra:

Balancing your chakras doesn’t have to be too intimidating. There are simple steps can take to help balance each chakra. For example, when it comes to the root chakra, you can start by simply spending time outdoors and engaging with the natural world. If it’s safe to go barefoot, then do it. It is a very affirming and rewarding experience to feel the cool, springy blades of grass under your feet. Sand at the beach is a good option, too. Also, think about what you eat—red foods and food that comes from the ground can help unblock the root chakra.

To learn more about balancing the chakras, check out our completely free and extensive guide on the topic here.

Have you ever been lucky enough to witness an armadillo digging around in the dirt? Or maybe you’ve been unlucky enough to find a ton of holes in your lawn one morning? Well, if you live in Texas, Florida or anywhere along the Gulf Coast then chances are you’ve been visited by an armadillo. The way armadillos forage for food presents us with a spiritual message of curiosity and dogged determination. They sniff, dig, sniff, dig, sniff, and dig, dig, dig until they find a creepy-crawly to eat.

How do you approach life? Do you search things out with enthusiasm and wonder? If not, why not? Begin by reflecting on what brings you joy in life. But, it isn’t just about simple joy, instead think about what sparks fervor and curiosity.

Whatever your hobbies are, have you considered that you could turn that enthusiasm into a career and potentially feed yourself and your family on the income? Well, these are some of the messages the armadillo spirit is sending your way. So, pay attention. Don’t dismiss your curiosity for unusual things as trivial, because the message you’ve been sent is that these hobbies or interests could ultimately be a big part of your future. Have faith, maintain your determination and you’ll find success like the armadillo finds a juicy grub to eat.

The armadillo is also a spiritual symbol of single people. This is because they are rarely sighted in groups. In fact, the only time armadillos interact is to breed and to raise their young. So, what message can we take from this? Well, it’s quite a clear message: being alone is okay. In fact, when it comes to people, the armadillo reminds us that we may not need others as much as we think we do. Having said that, to emulate the armadillo and be completely alone is a bit extreme. Instead, take the armadillo omen as a warning to reconsider friendships and relationships in life—are there people who bring negativity and unnecessary challenges into your life? Well, it might be time to cut them loose.

When it comes to interpreting dream meanings, it’s important to make a distinction between spiritual meaning and psychological meaning. This is because, psychology-wise, the meaning of dream will be specific to the person experiencing it. Think about it, it really depends on how you feel about armadillos. For example, if they scare the crap out of you and give you the willies, then if you dream about them you would consider that more a nightmare. So let’s leave any psychological analysis of your dreams to the professionals.

Meanwhile, we can dive into the spiritual meaning associated with an armadillo dream. The sighting of an armadillo in the dream world conveys all the messages seeing one in the physical world does. So, to dream of an armadillo represents determination, dedication, defense, achievement, and success. It especially represents success because it symbolizes the end of a cycle.

So, is there anything special about dreaming about an armadillo versus seeing one in real life? Yes, absolutely. When we dream about things the message can be taken as coming directly from the other side. Furthermore, it is often to do with secrets or buried emotions. This could mean the cycle that you are about to complete is something you may not yet even be aware of!