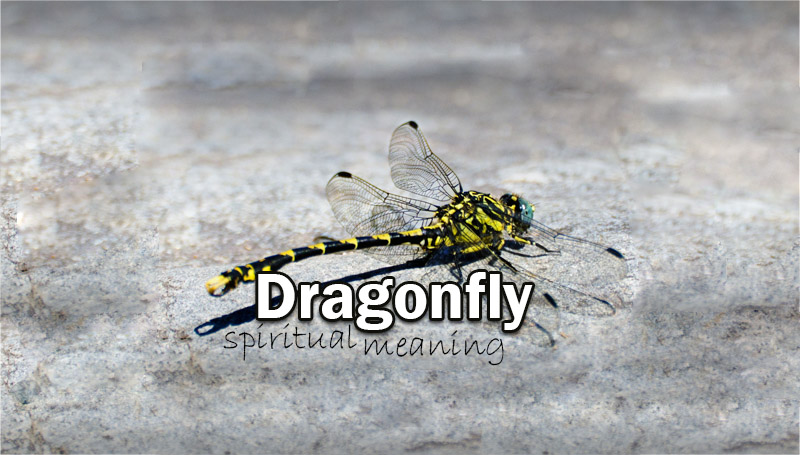 The dragonfly is an elegant creature that easily captures the imagination. So, it’s no surprise that the dragonfly is full of spiritual and metaphysical meaning. Many different cultures have legends and beliefs about dragonflies being messengers from the other side. For instance, one of my most cherished memories happened after the funeral of my father. My remaining family and I were outside recalling fond memories when suddenly at least a dozen dragonflies showed up. We couldn’t help but notice how beautiful of a spiritual message they were as they flew around us. It felt almost like a big spiritual hug. It was very comforting! We all took it as a sign that our loved one was safe on the other side.

Most cultures agree that the dragonfly has an association with transformation, change, and hope. This is because the dragonfly spends the greater part of its life in water. In fact, some dragonflies spend years growing in water and only a short few months of their lifespan in the air. Also, this sends a message that you should embrace living each moment to the fullest.

Dragonflies often have transparent wings and flitter about almost like a fairy from a mythical land. It’s easy to understand their link with nature and the earth. When the dragonfly appears we are being asked to stay present. Stay grounded! Change and transformation is a natural part of life. Rest easy, everything will work out as it should in divine timing.

One of the most striking features of the dragonfly is its ability to almost hover in midair. There are few sights as captivating as a dragonfly quickly and gracefully moving through the air. They have an ethereal, almost divine movement. This is why the dragonfly is often seen a messenger from spirit guides or past on loved ones. Some even believe they represent angels! Either way, know that you have divine protection whenever a dragonfly is near.

Dragonflies are generally thought to be bringers of good luck. Since they are beautiful, harmless, and hunt mosquitoes and horse flies, who can’t appreciate the helpful presence of the dragonfly? They also have an association with healing and protection in many cultures since they help to fend off these bringers of disease. You can expect positive changes whenever the dragonfly appears.

Also, dragonflies are known for their perseverance and adaptability. Believe it or not, dragonflies were around back when the dinosaurs roamed the planet! Because of their ability to fly quickly in any direction and their transition from water to air, dragonflies are seen as incredibly adaptive. They are also expert hunters, sometimes hovering until the perfect moment to strike at its prey. The dragonfly reminds us to maintain balance, stay patient, and be adaptable to opportunities that present themselves. They ask us, are you fully embracing the traits of the dragonfly in your daily life and routine?

Generally, there are only a few negative omens with the dragonfly. However, in some cultures there is a link between dragonflies and death. Especially since, after all, death is the ultimate transformation. There’s also some legends that a dragonfly flying near you meant that evil spirits might be sizing up your soul to see if you were a worthy candidate. Since dragonflies were thought to be associated with mythical creatures that lived deep in the forest, it’s easy to understand how this association came about. Some cultures even connect dragonflies with the devil and evil entities because of their connection with death.

As mentioned previously, the dragonfly spends most of its life in water molting several times. Spiritually, water is linked with emotions and air is linked with clear thought and logic. Because of this transformation of mastering different elements, the dragonfly reminds us to stay in touch with our feelings and process them clearly. Dive deep within the depths of your emotions. Are you blocking out emotions in certain areas of your life? Do you need more balance between your thoughts and emotions?

Also, it’s important to remember the dragonfly grows constantly in the nymph stage. This is why the dragonfly has an association with change and growth. Growth is often difficult and unpleasant at times. But, know that through growth you are maturing into the best version of yourself. Keep working towards bettering yourself and your life, so you can take flight towards your dreams.

What’s the Meaning of a Dragonfly in Your House?

I Saw a Dead Dragonfly. What Does It Mean?

It’s never pleasant to find a dead dragonfly. But, since dragonflies are closely related to death and transformation, finding a dead one asks us to pay even more attention. Whenever we see a dead dragonfly we must ask ourselves if there is some change or transformation that we are hesitant to take. Are you avoiding or postponing a necessary change in your life? A dead dragonfly is an omen that we must allow transformation in our life in order to reach the best version of ourselves. Allow what no longer serves you to leave your life. Remember, even though it might be painful, every ending allows for a new, beautiful beginning to flourish.

As with any dream, in order for us to understand the meaning of a dream it’s important to focus on how we felt during the dream. Dragonflies are very captivating, so it’s no surprise that you might vividly remember a dream of one. Usually when we dream of something, it is a message from our subconscious mind trying to communicate with our conscious waking mind. So, dig deep!

Generally, dragonflies are associated with transformation. They are also bringers of positive news, good luck, and change. So, apply this in the context of the rest of your dream. For example, if you dream of several dragonflies inside your house, you might expect some change in your home life. You could either be welcoming a new additional family member or have a new source of abundance coming in. It could even mean you’ll be buying a new home.

If you dream of running away from a dragonfly, you might be avoiding facing up to inevitable change. To dream of a huge dragonfly or many dragonflies might speak of drastic changes ahead in your life. If you dream of killing or eating a dragonfly, you might expect upcoming change that is impossible to escape. To catch a dragonfly in a dream might mean that you feel the need to control certain aspects of your life. Let go of the urge to control. Everything will happen as its meant to in divine timing. Relax and let it flow to you naturally.