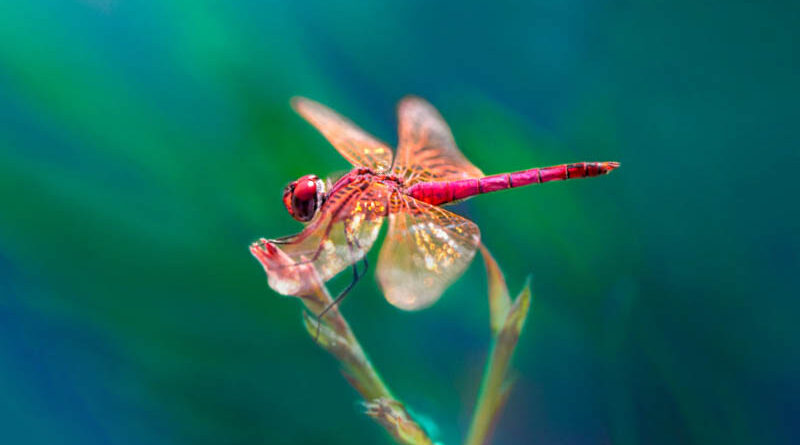 There are bugs out there that we don’t want to follow us. Don’t be shy. Say it with me: wasps! And that’s understandable, wasps are pretty mean and they will sting you. But, to have a dragonfly following you is an entirely different experience. The dragonfly isn’t going to sting you, but it might buzz around you as though it’s trying to get your attention. Depending on your beliefs, it’s easy to wonder about the spiritual meaning of that encounter.

A Dragonfly Following You Offers Its Blessings

To be followed by a dragonfly is, to some, a powerfully spiritual experience. It feels as though the dragonfly is trying to get your attention for some reason or another. It is believed that when a dragonfly follows you, it is attempting to bless you with its properties. Those properties are the four points discussed above: transformation, freedom, connection with the divine, and a way to communicate with our family and friends who’ve passed on.

Dragonfly Following You And Transformation

The big spiritual meaning associated with dragonflies is, of course, transformation.

Therefore, when a dragonfly follows you, the most likely blessing being offered is one of freedom. As such, is important to take on board that message of freedom and apply it to your life. Ask questions about where you might feel restricted in life. Then, of course, think about sensible actions you can take to re-capture the feeling of freedom that you are entitled to.

Take The Gift of Freedom

After transformation, freedom is the next most meaningful message dragonflies convey. So, when a dragonfly has decided to follow you, it could well be that the dragonfly is trying to bless you with the gift of freedom. Blessings, of course, aren’t always straightforward. Instead, it could be that you just need to take on board the message of freedom. After all, you have the power to change your life and take back your freedom. You don’t really need a “blessing” for that. Instead, it can simply be a matter of will power.

Dragonflies Following You and Lost Loved Ones

There’s something almost magical about dragonflies—they look magnificent, their colors shine as though crystalline. Moreover, they move with seemingly supernatural precision. It’s only natural to look for the magic embodied by the dragonfly. One of the most magical and emotional beliefs about dragonflies is that they come to us as messengers from our family and friends who’ve passed on.

So, when a dragonfly follows you as you walk, it’s hard to kick the idea that the dragonfly has a message for you. And what a wonderful message it could be. To be reconnected with people who have passed on is a dream come true. As such, many believe that a dragonfly following you is the spirit of a friend or family member temporarily taking over the dragonfly in order to use it to get your attention. The goal is, of course, to remind you that even though they have passed on to the next life, they are still with you in everything you do.

Learn More About Dragonflies and Their Spiritual Meaning