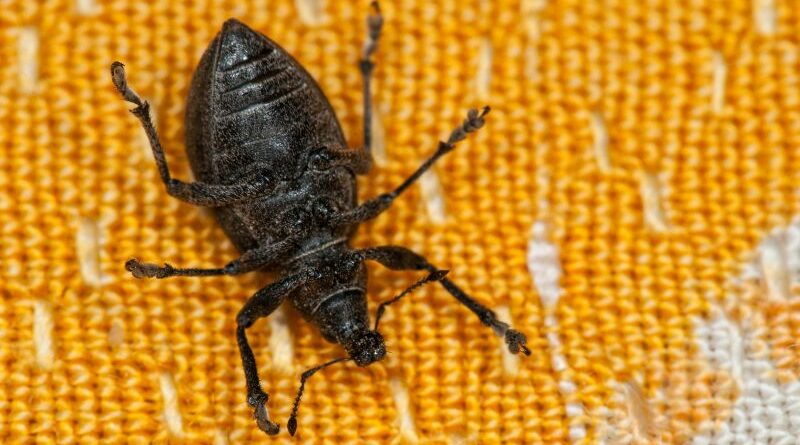 Yesterday I was going along my daily routine and minding my own business. Just as I was stepping out of the bathtub, I noticed a black beetle walking across the floor. While I am not a big fan of bugs generally, I usually try to let most of them just exist peacefully if they’re not harmful. In my current home, I rarely see bugs anymore so I was surprised to see him but didn’t pay it any real attention. After I get dressed, I open up the bathroom door and there’s my bug friend. But, he’s upside down, his legs flailing helplessly in the air. Oh no! I couldn’t help but wonder, what’s the spiritual meaning of a bug on its back?

First, don’t worry. I took a piece of tissue to help our beetle friend get right side up and took him outside so he could get back to his or her important beetle business. But, I continued to think about the encounter after. There’s something sad and a little poetic about finding a bug on its back unable to right itself. What does it all mean? So, let’s explore the spiritual meaning of an upside down bug.

Let’s Talk About Bugs In General

First things first, let’s talk about bugs. Bugs are probably my least favorite topic. I can’t tell you how difficult it is to look up pictures to place in these spiritual articles sometimes. I literally had to take a shower after writing the cockroaches article, no joking. Honestly, I would rather write about almost any other topic. But my personal preferences aside, it’s important to understand the general spiritual meaning of bugs before we move further.

Many people believe bugs to be a sign of filth, plague, and disease. But actually, bugs have incredibly deep spiritual symbolism that’s mostly positive. Bugs represent transformation, rebirth, and abundance. After all, figures say that there’s 200 million insects for each human on the planet. I’ll keep my thoughts on that to myself! But, know that bugs are incredibly plentiful, abundant, resilient, and adaptable. They’re also messengers to stay grounded, since most bugs are all about the earth and dirt!

So, how do we apply this symbolism to an encounter with a bug on its back? Well, it depends. But, let’s start with whether the upside down bug was alive or dead. That obviously has a big impact on things!

Dead Bug On Its Back Spiritual Meaning

A dead bug on its back is a fairly common sight to see. Most bugs die like this because the tension in their legs relax and they kind of just fall over. Just in case you’re worrying about if they suffered before meeting their fate, entomologists believe that bugs can’t actually feel pain because they don’t have the pain receptors that vertebrates do. So, maybe you can have a little bit of solace in that. Death doesn’t have to be painful. Knowing that actually made me feel better and I dislike bugs!

Still, what’s the spiritual meaning of a dead bug on its back? Bugs represent rebirth and transformation. So, a dead bug is a spiritual message to allow transformation to happen in your life, painlessly. In other words, change your perspective on endings and death. Sometimes in life we want to hold on to things that are no longer serving us. Trust me, I’ve been there. For me, it was that one ex I just couldn’t let go of for years even when he obviously wasn’t the best for me.

An upside down dead bug is a message to change your perspectives on letting things go. Remember, if you’re too busy holding on to the old things in your life, it’s more difficult to allow space for new and better things. So, let go of the past and let the future in. Remember, every ending is a new beginning. It doesn’t have to be a painful transition unless you’re holding on to the past.

Live Bug On Its Back Spiritual Meaning

One of my favorite bands Radiohead has a song titled “Let Down” which has a few lines about a bug. Please don’t listen to this song if you’re feeling down, it’s a bit dark! But, the lyrics worth nothing are “crushed like a bug in the ground, let down and hanging around, shell smashed, juices flowing, wings twitch legs are going, don’t get sentimental, it always ends up drivel, one day I am going to grow wings, a chemical reaction” which I find perfectly captures the feeling of a bug on its back. It’s a hopeless optimism which I think most people feel at some point in their lives. So, what’s the spiritual meaning of a live bug when it is upside down?

A bug on its back is a reminder that our struggles are not in vain. Remember, bugs represent transformation, rebirth, and abundance, too. So, know that whatever you are going through currently is only temporary. At times you may feel helpless or that you are getting nowhere and making no progress in life. But, you are. Much like the caterpillar has to transform into a pile of goo before it becomes a butterfly, just like growing wings because of a chemical reaction, you will soon overcome any obstacles in your way. Even if it appears hopeless at times. Never give up faith, trust in yourself and the divine.

And, if you want to acquire some good karma, give your helpless bug friends a hand to get right side up. Much like how our help from the spiritual realms probably feels about us when we’re helplessly upside down in our struggles. It’s only temporary and you are divinely guided and unconditionally loved. Unless it’s a wasp, don’t help them! I’m kidding, I’m kidding. Sorta. Wasps sting.

What Kind Of Bug Is It?

A black bug, like the one I saw, represents spiritual protection and protection against negativity. Of course, there might be additional meanings depending on its exact type, like check out our black cricket article. But, know that if you see a black bug on its back you are divinely protected during any periods of transformation.

A green bug has a connection with the heart chakra which is all about money and love. So, you might expect big changes in these areas of your life. Make sure to read our guide on how to balance the heart chakra for more guidance.

A brown bug has strong association with the earth, fertility, and nature. It’s a gentle reminder to stay grounded. So, you may want to take a look at how much time you spend out in nature. Remember, bugs on their backs are about changes in perspective.

A red bug on its back is a reminder to get in touch with your strength and power. Are you giving your power away somehow? It also has a connection with the root chakra, so make sure to check out our article on the root chakra.

Dream Meanings Of A Bug On Its Back

Have you had a dream about a bug on its back? When it comes to interpreting dream meanings, make sure to pay attention to how you felt during the dream first and foremost. If you were afraid of the bugs in the dream it will have an entirely different meaning than if you were apathetic or even happy about it.

Generally, dreams about bugs represent something that we are worried about in our waking life. It can represent feelings or emotions that we may not want to deal with. When you dream of dead bugs, it means there’s been a transformation or death of these fears, negative feelings, or anxieties. In other words, you can expect any worries or insecurities you may have to end. This is especially true if you felt some relief or even neutral reaction to the dream. Or, if the bugs on their backs were dead.

On the other hand, if you were frightened of bugs on their backs or they were struggling, then you may feel completely overwhelmed with your current worries. Remember, every experience is temporary. Try to stay calm and allow the storm to pass. You got this!