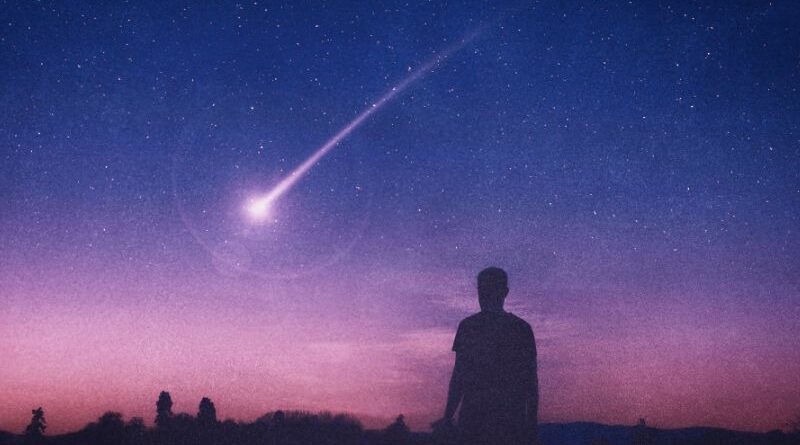 There’s not more magical than witnessing a shooting star flying across the night sky. Since ancient times, humans have been fascinated with shooting stars. And, it’s only natural! Shooting stars can’t help but spark our imagination. What is that streak of light? Where do they come from? Is there more out in the rest of the universe than just us? Is that a good sign or a bad omen? What do shooting stars mean? Or maybe even, what’s the symbolism and spiritual meaning of a shooting star? After all, you are here on this article!

Well, rest easy. You’re in the right place to answer all of these questions and more. First, we’ll cover a little history about shooting stars then we’ll discuss what they actually are before we get into shooting star symbolism and spiritual meaning. Then, we’ll answer some common questions – like should you wish on a shooting star? So, sit back and get comfortable. We’re going to embark upon a journey of finally understanding the true spiritual meaning of a shooting star.

Before the countless hours of on demand movies and even electricity, the night sky was pretty much the only entertainment after the sun set. Imagine without the knowledge of modern day science or the internet, what you would have thought upon witnessing your first shooting star? You might think the stars were falling to earth from the heavens. After all, sometimes shooting stars are called a falling star. In fact, many in the deep south believed Judgement Day was happening in 1833 during the Leonids meteor shower in what was known as “The Night The Stars Fell” afterwards. Make sure to check out this incredible read about it.

Did you know that the ancient Greeks and Romans believed that shooting stars were a sign that a big change and something important was inevitably going to happen. They often believed shooting stars were human souls – either new souls entering or deceased souls leaving earth. In fact, shooting stars and comets were said to be witnessed after the death of both Cleopatra and Julius Caesar. But, it didn’t always have to be an important soul leaving. Some speculate that the star in the sky in Bethlehem before Jesus’ birth was a comet, another message from the heavens signifying the arrival of an important person.

The ancient Greek astronomer Ptolemy believed that the gods allowed a star to visibly slip through the heavens, so it was only logical that they must be nearby when we witness a shooting star. Therefore, it’s only natural to make a wish when we see one. Or, in other words, to send a prayer to the gods for what we wish to have. Makes sense! But, what are shooting stars really?

What Is A Shooting Star Actually?

Shooting stars are usually meteors or tiny bits of dust that enter into our atmosphere and eventually burn away. When this happens, the friction makes the air glow as they pass, making us visibly see what we know as a shooting star. One of the more famous meteor showers is the Perseid meteor shower which happens around August every year which is visible at the writing of this article. So, what does this mean to us from a spiritual perspective?

A shooting star is a reminder of your connection to the divine. It is a sign that manifestations in the spiritual realm are moving into the physical world. In other words, your wishes will soon come true. And, it’s important to remember that this might not always be the most comfortable process. After all, a meteoroids are consumed by our atmosphere in most cases. Still, this does put on a dazzling display for us down below. But remember, while change may not always be pretty, from a divine perspective it is beautifully perfect. But, the symbolism of the shooting star doesn’t stop there. So, let’s get into it.

Is It Good Luck To See A Shooting Star?

By now we’ve covered the historical beliefs and spiritual meanings of shooting stars. But, is it good luck to see a shooting star or a bad omen? Across most cultures today it’s believed that a shooting star is a positive omen. After all, you were in the right place at the right time to see it. And, if you believe in synchronicity, nothing happens by accident. So, it’s definitely a message from the divine worth paying attention to.

However, it is worth nothing that shooting stars are actually not that rare according to science. It’s said that 25 million meteors probably hit Earth’s atmosphere in a 24 hour period. However, most aren’t visible because of light pollution. It’s estimated that 80 percent of the world’s population lives under some form of light pollution. And, it’s even higher in Europe and the United States which makes seeing shooting stars fairly difficult.

From a spiritual perspective, this is an extremely important message. You are seeing something that most of the world cannot or will not. Many are disconnected from their environment and never look up. So, when you see a shooting star know that you are on your highest path. You have the potential to delve deep into spiritual realms since shooting stars are symbolic of messages from the heavens. Where others may feel uncomfortable, you will thrive. So, try to keep your heart, your mind, and your eyes open to possibilities. Embrace your own unique gifts!

Should I Wish On A Shooting Star?

So, from a spiritual perspective, should you wish on a shooting star? Absolutely! Wish on shooting stars, wish on throwing pennies in the well, wish on your birthday candles too. In fact, wish on morning traffic and in hot showers as well! Wish all the time. Your thoughts create your reality, so keep thinking and wishing. Remember everything that we have in our daily life once only existed in someone’s mind as an idea. So, keep making wishes all the time! It can’t hurt.

Is a wish more powerful when wishing on a shooting star? It’s possible. As mentioned previously, Ptolemy believed falling stars were when the gods were present so a request was more likely to be fulfilled. So, go for it! After all, you are very lucky to see a shooting star. So, take advantage of that good fortune!

Still, it is important to mention according to this ancient belief you may not want to point when you see a shooting star. That’s because the gods will know that you are aware of their presence and be less likely to fulfill your wish. So, just keep that in mind if you believe in such superstitions. Otherwise, keep pointing and wishing!

Probably not. Missing important spiritual messages like this is a reminder that everything happens in divine timing. In other words, you simply weren’t meant to see it at that time for whatever reason. It’s not always up to us to understand the inner workings of the universe, fate, and divine timing. Everything is unfolding exactly how it’s meant to. That’s actually a more powerful spiritual message than seeing a shooting star and making a wish.

Other times these experiences happen to nudge us back on our spiritual path. For instance, have you been worrying too much about the future? Or, have you been feeling overly negative and pessimistic. It’s okay, it happens to all of us at some point. You may want to look at how you’re currently bringing spirituality into your life. Make sure to take some time to be present and meditate.

Spiritual Meaning Of Seeing A Shooting Star While Driving

We already know that shooting stars symbolize wishes fulfilled, renewed hope, and upcoming change. From a spiritual perspective, driving symbolizes our journey through life. Therefore, seeing shooting stars while driving means you are currently on the right path in life to having your dreams come true. And remember, a journey doesn’t have to always be the most efficient or direct and it’s not always about destinations. Sometimes those unplanned detours in life are where a lot of the good stuff happens in life. Make sure to check out our article on spiritual meaning of road work for more insight on this.

Also, be mindful of circumstances surrounding your trip when you see a shooting star. For instance, were you coming from seeing someone new? Or, were you thinking about your job? You might expect upcoming positive changes on whatever topic you were thinking about at the time.

This may not resonate with everyone, but it’s worth mentioning here in case it helps someone. Do you feel as if you don’t belong on this planet at times? Well, everyone probably does. But, more than that. Do you identify as a soul from an entirely different planet? Or, a starseed as it’s often called. If you speculate that you may be one, check out this article for different signs of being a starseed. So, what does this have to do with shooting stars?

Well, shooting stars are a visible sign from the heavens. It’s a message that there’s a vast universe out there full of different experiences. Remember, like the expression goes – you are not a human having a spiritual experience, but a spiritual being having a human experience. You may want to research if there’s a meteor shower going on when you see one, what constellation it’s associated with. You may find some messages about the origins of your soul if being a starseed resonates with you. This topic is much too vast to get into in this article alone, but take some time to research it and reach out to starseed communities if you feel this might help you. Starseeds often feel different and alone and struggle to conform at times. Just know that you’re actually not alone. There are others out there who feel the same way as you do.

Have you had a dream about a shooting star? As always, when interpreting dreams make sure to pay attention to how you felt when you saw the shooting star. This is your biggest clue to what message you are meant to hear.

Being afraid of a shooting star, or several shooting stars, might mean that you fear change. It could be a message that you need to pay more attention to how you are currently navigating your waking life. Are you willfully ignoring things that you know need to change? Do you feel stuck somehow? Take some time to honestly look at your life and see if it’s time to let something go that no longer serves your highest purpose.

But, generally a shooting star is an incredibly positive omen even in dreams. They usually represent a fulfillment of wishes and dreams coming soon. Know that when people dream of celestial bodies, including shooting stars, it’s usually during a period of their life when they are focusing on ambition and goals. So, rest easy. More than likely, your dreams are soon to come true.

Also, make sure to pay attention to anything or anyone surrounding you when you see a shooting star in a dream. You may find some additional messages. For instance, if you were with your current romantic partner in your dream, then you might expect a renewal of commitment or moving things to the next step soon. But, apply it to how it resonates with you in your dream!