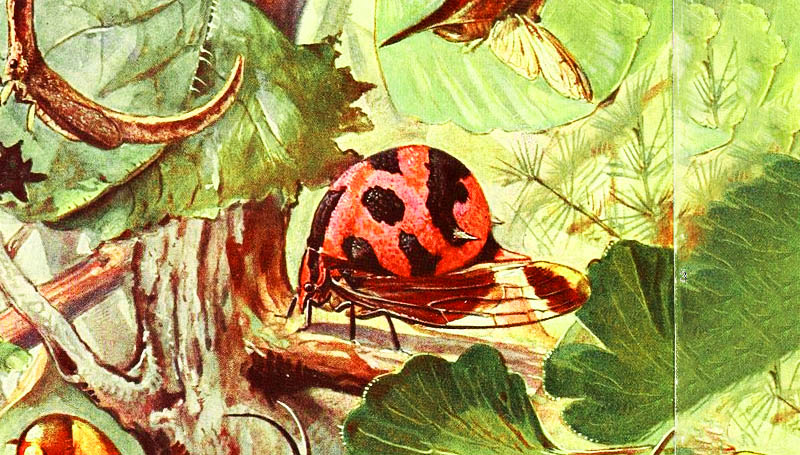 So you’ve seen a dead ladybug (also known as a ladybird or a lady beetle) and you’re wondering what it means.

Ladybugs, with their stunning black and red coloration, are eye-catching when we see them flying in front of our eyes or crawling across leaves looking for aphids to eat. But, they can capture our attention even more so when we encounter a sadly departed ladybug. When a sighting or encounter with a creature feels significant it’s something you just sort of know. If you’re here, then it means you followed your intuition and the dead ladybug you encountered felt like it was conveying a message.

What is the Meaning of a Dead Ladybug

In life, ladybugs are particularly symbolic beings. There are three main things that ladybugs symbolize, foretell, and stand for.

Firstly, ladybugs are omens of prosperity and abundance. This meaning is conveyed in two ways. Firstly, ladybugs often present in massive numbers. For some reason or another, sometimes nature’s balance shifts a little and it causes ladybugs to have an especially successful summer. In these summers you’ll find ladybugs number in the thousands wherever you go. But, that isn’t all. Another facet of ladybugs communicates a message of abundance—the spots on their shells. Because ladybugs possess multiple spots, they stand for growing and multiplying numbers.

But, that’s what a ladybug stands for in life. In death, the message conveyed changes. It’s difficult to sell the sighting of a dead being as a “good omen” and in this case it’s no different. This is because literal death predicts the ending of a cycle. So, therefore, a dead ladybug can be taken as an omen of lean times ahead. However, it’s important to remember that this isn’t necessarily something to be uncomfortable with. For something new to grow, whatever was there before has to vacate that space. As such, you can prepare for the lean times ahead and make decisions to help you regain your financial security ASAP. An omen comes as a warning to pay attention, that way we can avoid the worst.

Ladybugs, being insects, go through a larval stage. Therefore, they are significant omens of transformation. Whatever you feel about your life currently, the ladybug lets you know that you can transform into something entirely different. Also, because of the relative beauty of the ladybug’s adult form versus its less visually appealing larval stage, it stands for a transformation into something beautiful. It doesn’t have to be about literal transformation from physically ugly to physically beautiful. Instead, the ladybug let’s you know that positive transformations are possible. For example, a bank account with $0.00 could be considered “ugly” and one with $1,000,000 you would probably agree is a “beautiful sight”.

The death of a ladybug, though, continues the theme of transformation. In fact, it amplifies that omen. To us, literal death appears to be the end. Whereas, spiritually speaking, we know that is not the case. Death is an omen that the end of a cycle is here. So, to witness a dead ladybug is to receive a message that a rebirth is coming. That rebirth might create a period of ugliness, like the larva of a ladybug, but ultimately you will once again bloom in life.

Ladybugs symbolize adventure because of their amazing ability to take to the skies and travel large distances in search of food. Also, think about their relative size—they’re so small! Yet, they travel so far. As such, ladybugs are an omen of adventurous times ahead. They predict a passionate fervor in you that will see you stop at nothing until you reach your goals. And more than that, they let you know you’ll have a whale of a time on the way.

However, how does a dead ladybug modify this omen? Well, the dead ladybug let’s you know that, for the time being at least, the adventures have to be put on hold while you prepare for another phase in life. It doesn’t mean you won’t be riding the roads again, but it does suggest that a time of regrouping and strengthening your hand should be the priority.

It’s difficult to say for sure whether a dead ladybug is a good omen or a bad omen. The reason for this is complicated. Owing to our own mortality, we tend to look upon death as a bad thing. But, in terms of omens and symbolism, it is simply a metaphor for the end of a phase or cycle in your life. Remember though, that isn’t inherently good or bad. It depends what is ending, and more than that, it depends on what will grow in its place.

This is where the dead ladybug omen comes in. As discussed above, the dead ladybug predicts an end of abundance and adventure. Yikes, that sounds pretty bad, doesn’t it? Not necessarily. This is because you don’t yet know what will grow in place of what was there before. After all, a dead ladybug is a double omen of transformation. It predicts the beginning of a new cycle which, admittedly, might be ugly to begin with, but ultimately, will be a beautiful thing.