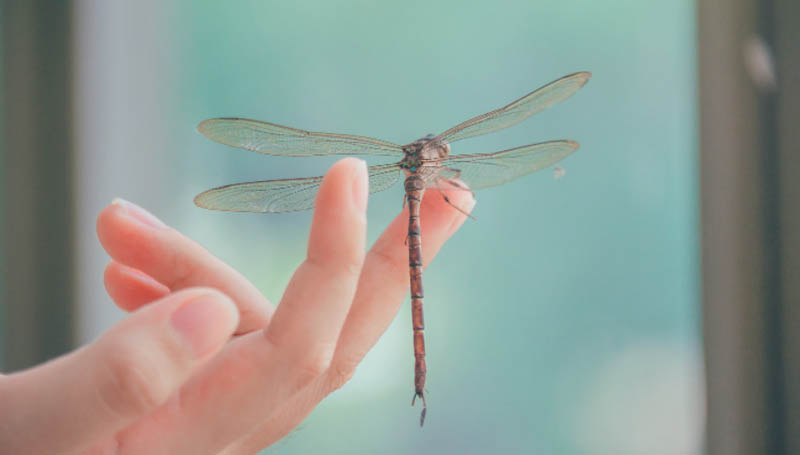 In this article, we’re going to talk about the spiritual meaning associated with a dragonfly landing on you.

A lot of the time, when a bug lands on you, you’re probably going to freak out. Creepy-crawlies walking across your skin can be the stuff of nightmares. Just imagine (or don’t) what it would feel like to have a giant cockroach walk across your face! Argh! What a terrible thought. However, we don’t think of all insects in the same way. For example, a ladybug landing on you wouldn’t be as gross as a beetle. Which is odd, because a ladybug is a type of beetle! It’s just a superficial difference!

The dragonfly’s spiritual meaning can be summarized under the following four bullet points.

When a dragonfly lands on you, it brings its blessings to you. To understand those blessings, it’s good to familiarize yourself with the list of four general dragonfly spiritual meanings mentioned above.

Dragonfly Landing on You and Metamorphosis

An Earnest Blessing of Freedom!

Dragonflies are also significant omens of freedom. Freedom and transformation are two concepts that synergize well. It is freeing to transform, and transformation requires you to understand how free you are. So, when a dragonfly chooses to land on you, it is also blessing you with its message of freedom. So, you might not want to completely transform your life, but maybe you just want to feel a bit more free of certain burdens? Well, the dragonfly lands on you to convey a message that it is possible for you to take your freedom back.

Is a Dragonfly Landing on You a Message From a Lost Loved One?

This particular belief can be quite emotional to discuss. Spiritual beliefs vary from person to another. And that’s natural. Everybody has their own personal convictions. This is also true when it comes to beliefs concerning dragonflies.

Some believe that dragonflies are vessels that the souls of our loved ones can occupy temporarily to send us a message. If this resonates with you, when you have an encounter with a dragonfly, then you have reason to believe that it is a message from that loved one. This message is, of course, amplified when the dragonfly lands on you.

Does a Dragonfly Landing on You Grant a Wish?

You’ve probably heard of the classics! For example, you’re granted a wish if you’re lucky enough to see a shooting star. Or, another one is when you’re mixing a cake—everybody in the family gets a turn mixing the cake, and as they mix the batter, they get to make a wish. Well, some people believe that having a dragonfly land on you is a similar blessing, i.e. the dragonfly landing on you is a chance to make a wish.

Like most wishes, you’re probably best keeping it a secret. This is because, traditionally speaking, people believe that if you share your wish then it won’t come true.

Learn More About Dragonflies and Their Spiritual Meaning