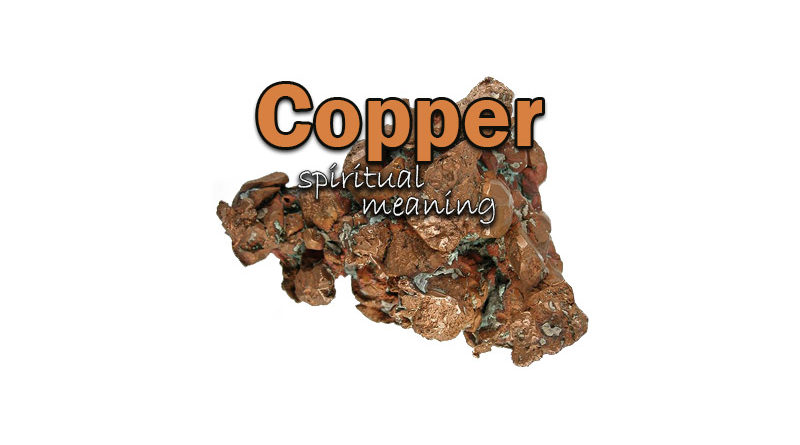 Copper, what are its spiritual meanings? Also, what omens does this common metal convey? And, how about copper’s symbolism and metaphysical meaning?

Sure, when it comes to jewelry, we value gold and silver most of all because of their properties and appearance. So, it’d be “normal” to wonder about the symbolism associated with either of those precious metals. But, remember, copper isn’t so ugly itself—it begins a brilliant rich and deep orange, until it oxidises and gains a beautiful green coat. It’s not only appearance that makes copper worthy of appreciation, it’s also useful—it’s easily shaped and a great conductor of electricity. And, copper, you might be surprised to hear, has lots of spiritual significance in many different cultures.

Understanding copper’s significance to us both practically and spiritually begins with appreciating just how far back our relationship with copper goes. Because copper exists in nature in its useable metallic form (i.e. a “native” metal), our ancestors were able to identify it and use it early on. So, because copper is a native metal, its first use dates back 10,000 years! As you can imagine, this means copper has long been significant to all people all over the world.

One of the quickest ways to begin to understand the spiritual meaning of something is to look at its color. But, when it comes to copper, that isn’t so straight forward. What color is copper after all? Well, that depends on what state the metal is in.

When it is first melted and cooled, copper is orange with a pinkish hue. Whereas, when it has been cooled for quite some time it is a duller brownish orange. But, eventually, due to oxidation, exposed copper will turn green—think of copper dome roofs and, of course, the Statue of Liberty!

Brown and the Root Chakra

So, if you are feeling ungrounded, perhaps you could wear a piece of copper jewelry as a way of reconnecting with the ground. Also, copper items make a good gift for friends and family who might be feeling ungrounded. Also, a good idea is to use a piece of copper jewelry to hold a crystal or gemstone that also helps unblock/balance that particular chakra. So, in the case of the root chakra, you should consider red carnelian, bloodstone, garnet, or black tourmaline.

Orange and the Sacral Chakra

The sacral chakra is also connected to social interactions, especially those of a sexual or sensual nature. As such, if you are experiencing issues relating to sexuality, you might want to consider wearing a piece of copper jewelry. Remember, you can use copper to hold other precious stones. So, you could use copper to hold calcite, carnelian, goldstone, moonstone, or coral. By doing this, both the stone and the copper holding the stone would help unblock and balance your sacral chakra.

Green and the Heart Chakra

Also, don’t forget that, given enough time, copper will turn green. If you don’t believe it, then take a look at the Statue of Liberty. It’s made of copper, and it’s green as can be. So, naturally, being the color green brings to mind the heart chakra. The heart chakra is typically displayed with a green symbol.

Copper isn’t really green, it’s orange or pinkish orange. The green is actually a coating on the metal as a result of oxidation. Therefore, copper isn’t as strongly associated with green as it is orange. So, take its associated with the heart chakra with a pinch of salt.

Copper connects our physical world with the spiritual worlds beyond our conventionally accepted senses. Since its ancient use, copper has been linked with Venus and Aphrodite.

The Ancient Romans obtained most of their copper from the island of Cyprus, which they believed to be a sacred place. So, divine properties were also extended to copper. It also helps that copper, relatively speaking, has a desirable luster—especially when it has first been melted and re-solidified. So, you might be able to see why copper would be linked with goddesses of love.

Using copper with other gems is believed to enhance the power of the gem it is being combined with. For example, if you set a piece of angelite in some copper, the angelite’s ability to bring you peace of mind will be amplified.

Also, if you’re trying to balance your chakras as per our guide, then you can use copper to help boost the different gemstones associated with unblocking and balancing the various chakras.

Keep Your Sagittarius With a Copper Braid

If you’re in a relationship with a Sagittarius, then copper might be a nifty gift to give. This is because, yes, Sagittarius is associated with copper. But, also because Sagittarius suns are notoriously flighty. It can be quite difficult to keep them tamed and loyal. So, what better way to ground them than to give them a copper gift. In fact, if you gift a piece of braided (i.e. bound) copper, then it strengthens the bond. Try giving a braided copper ring, for example.

But, if you really want to seal a love, then the best thing to do is combine copper with an emerald. The metal will amplify the positive influence of the emerald on your loved one’s heart.

Sagittarius isn’t the only sign associated with copper. Taurus is another one. Being an earth sign, Taurus naturally appreciate copper which is a grounding material. Also, Taurus are known to desire and appreciate beauty. But, the appreciation of beauty isn’t where it ends, they also like to possess it. As such, a piece of copper jewelry makes an excellent gift for a Taurus sun.

Libra and an Agile Mind

There’s one last zodiac sign with a link to copper: Libra. This is because Libras possess bright, agile minds. Like a Libra’s mind, copper is bright. Also, a link can be made between a Libra’s flexible mind and copper’s flexible properties.

Copper Balls – What do They Mean?

Spheres made of copper are often used by adherents to the Law of Attraction. This is because copper was used in ancient alchemy, valued as a metal that could be used to ultimately create gold. So, when attempting to manifest wealth, a copper sphere is used as an aid to facilitate belief.

Spheres in general can also be good for meditation and anxiety relief. If you have a couple of them, then you can rub them against each other while you relax.

Is copper good luck? Yes, of course! That’s where the British and American notion of a lucky penny came from. This is because, traditionally speaking at least, pennies were made of copper. This belief is also on display in penny countertops. For example, if a place of business has a penny countertop, then trust and believe the business owner is the superstitious type and wants to bring in good luck in business.

Copper is a useful metal in the creation of alloys; with bronze and brass being the most well-known. Again, this symbolizes wealth because, in the past and today, metals like bronze and brass were and are highly valued. That value is what creates the symbolic link to wealth.

Also, because copper blends well with other metals, it creates a powerful meaning of strength. But, not just strength in of itself, but rather the strength created in a union.

Copper in Your Diet?

We’re always hearing about iron in our diet—do we have enough of it? Well, did you know that copper is also a very important part of our diets. In fact, it is essential for life. Therefore, we can take copper to be associated with life itself, because without it, there would be no life.