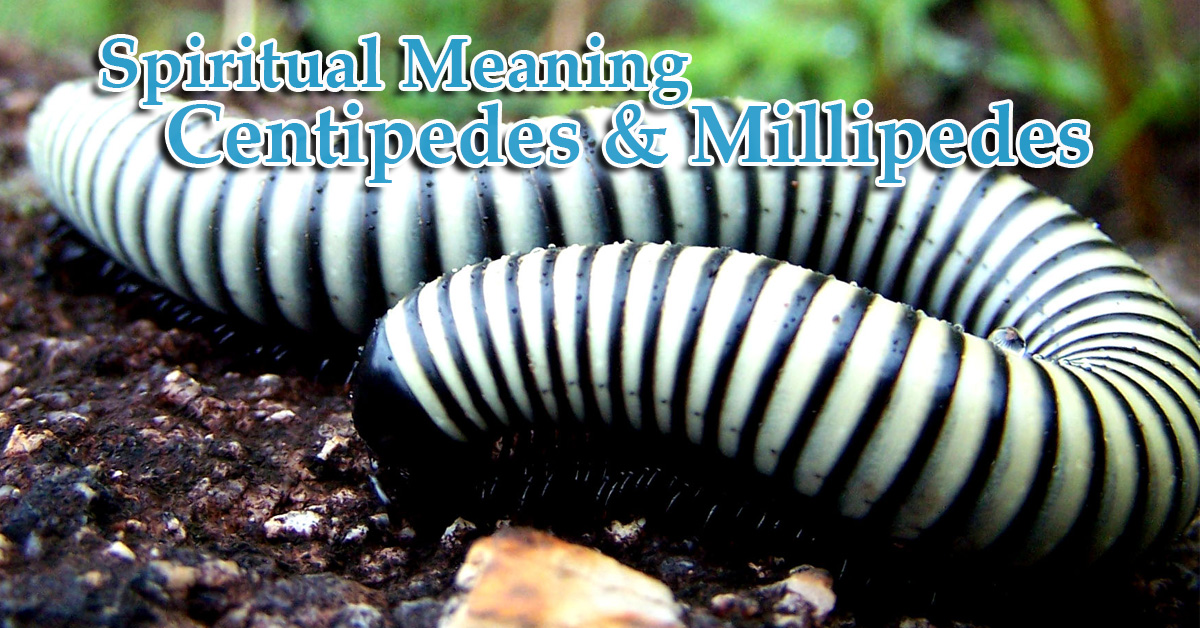 What’s the spiritual meaning of seeing a millipede in your house?

Sometimes, certain bugs just keep on showing up. No matter how many times you take them outside, check around the front and back doors, and secure their ways of getting into the house, they still find a way in. Millipedes are definitely one such critter. Sometimes they just always find their way into your house.

Sure, it could be that it’s just an environmental thing—it’s cold out, and they like the warm (or vice versa). And that may be true. However, that doesn’t really invalidate any feeling you might have that there’s an omen, spiritual message, or other possible meaning there! If your intuition tells you that, when you encounter a millipede, that there’s a spiritual meaning there, then who is anybody to argue with that?

So, in this article we’re going to look at the spiritual meaning of millipedes, omens associated with them, whether they are good luck or bad luck. Also, last but not least, we’ll talk about the dream meaning of a millipede.

Millipedes Are Tough to Handle!

Millipedes are substantial symbols of fortitude, strength in defense, and invulnerability. This is because—and if you’ve ever handled the wrong species you’ll know—they secrete a nasty and irritating substance. That fluid that they release when threatened can be quite noxious.

Therefore, a millipede can present to you as an omen or message relating to self-defense. To apply this spiritual message, reflect on your current circumstances. Wherever you feel attacked by external forces, think of the millipede omen and make sure to defend yourself to the hilt.

As a symbol of defense, it could also be that the millipede is coming to you as a harbinger of an incoming attack of sorts. This, of course, likely won’t be literal. Most of us are probably lucky enough to live lives of relative peace. However, not all attacks are physical. There are many ways your interests could be put at risk. However, there’s no reason to fret. Simply take your cues from the millipede and be stout in your defense of the self and also those you care about and you’ll be fine!

One last consideration of this message, though! It could well be that you are not the victim. Perhaps you are bothering somebody else, and, like the millipede, they want to coil up and defend themselves from your attacks. Always remember that your actions have impacts on others—are you unduly pestering or harassing somebody? How do your actions make the people are you feel? Of course, don’t develop a complex about it. Instead, just reflect on it and be as nice to people as you can and you’ll be fine!

Do Millipede Legs Have a Spiritual Meaning?

There are a lot of things that make millipedes really interesting little characters. For example, unlike a lot of other bugs—looking at you, cockroaches—they don’t move with great deal of speed. Which is nice, because if they could move like roaches then they’d be the things of nightmares. Instead, they move slow and steady and, really, that’s kinda cute, isn’t it? Also, millipedes are often striking colors—black and red or black and yellow. However, as interesting as all those things are, they are not the defining features of millipedes. The defining feature is, of course, how many legs they have!

The core spiritual message of a millipedes many legs is one of grounding, i.e. you are so well-grounded that absolutely nothing can knock you. No matter what troubles you encounter in life, you will be able to maintain a solid balance in spite of the turbulence. Therefore, if you keep seeing millipedes, it could well be that the message for you is to focus on being grounded. There are many ways to ground yourself, and those are covered extensively in our excellent guide to the root chakra here. Check it out. If you don’t have time, though, the essence of it is to meditate, spend time outdoors, and eat a healthy diet that includes root vegetables.

Millipedes Coiling Up: What Does It Symbolize?

There are a few different spiritual messages that could be intended for you if you commonly see coiled up millipedes.

Firstly, let’s consider the most obvious message: defense. Millipedes literally coil up as a way of protecting themselves from incoming attacks. Therefore, you should contemplate the same. Specifically, are you defending yourself well enough against any outside threats?

Secondly, a coiled millipede could indicate feelings of guilt and shame. Are you feeling so embarrassed by something that has happened to you that you’ve isolated yourself from others and spent too much time focusing on the past? Well, consider the millipede, when the threat has passed the millipede uncoils itself and moves on with its life. The past is the past, don’t dwell on it because the millipede doesn’t.

Lastly, perhaps a coiled is communicating a need to reflect. If you’re experiencing difficult issues in your life, a coiled millipede could be a sign from your guardians to slow down and indulge in a period of introspection. Like the millipede, wrap yourself up in yourself. From there, consider your thoughts, feelings, and situations. Reflection, introspection, and meditation can help you find clarity.

Millipedes are very much about the internal value over the superficial. Not only are millipedes encased in a strong exoskeleton, but also, their defense method is to coil up. And, in coiling up, millipedes are very much looking inward. This can be taken as a message or omen to focus on yourself. Moreover, focus on looking at yourself and your values: appreciate yourself! After all, you deserve it.

You might not always feel appreciated by the world around you. In times like those, it’s important to rely on yourself for confidence. Take the message of the millipede and look directly inward. It could also be time to research positive affirmations and incorporate them into your daily routine.

Power of Solitude and Independence

Millipedes often move alone, and do so at night time and in the dark. Therefore, they represent the power of solitude and independence. So, if millipedes or centipedes are visiting you regularly, it could symbolize a celebration of the strength of your independence. Alternatively, perhaps it could be a message to be more independent—reflect on your interactions with others and consider if you are overly dependent on others to feel secure and happy.

The above synergizes well with the millipedes aforementioned habit of coiling up and looking inward. The habit of curling up in a ball is also a very significant symbol of independence, self-reliance, and the importance of, at times, solitude.

Millipedes, typically use their antennae to feel their way through the darkness. But, unlike predatory centipedes, millipedes are not hunters. Instead, they scavenge on rotting wood. Therefore, their appearance in your life is a sign that you should—when in times of doubt, like darkness—rely on your intuition. Of course, pair any gut feelings up with your intellect, and then make the best decisions for yourself and the people you care about. After all, it is fair to suspect that millipedes are presenting themselves to you to remind you to focus on instinct and psychic connections.

Additionally, millipedes convey a message of empathy, sensitivity, and understanding. And they do this through their delicate antennae. As you can imagine, many invertebrates with sensitive feelers on top of their head also convey this same message. It is a simple message to remember to feel your way through life, being kind, sensitive, and understanding of others.

Millipedes, the Earth and Plants

Millipedes are a strong omen relating to the ground, plants, trees, and nature.

First of all, millipedes have many legs that give them a very strong footing on the ground. Therefore, you could interpret their visitation as a sign that you are ungrounded; consider spending more time outdoors, especially bare foot! Additionally, perhaps gardening would enhance your mood and bring you closer to tranquility.

Secondly, millipedes play an important role in the recycling of the world’s energy. This manifests through their diet, i.e. they consume rotting wood. So, perhaps you could take frequent visitations from millipedes as a sign that you should focus on the Earth’s ability to take something and return it to its origins before renewing it again. Perhaps a cycle in your life should come to an end, and from that end, a new, clean, fresh and invigorating beginning can grow!

When we encounter a dead animal, the omen can, naturally, feel quite bleak. To see something that has lost its life, of course, triggers our empathy. We feel sorrowful that this beautiful life has suffered and ended. However, it’s important to remember that—spiritually speaking—death is not the end. It is part of the never-ending cycle of birth, life, death, and then rebirth. As such, that is what a dead millipede represents.

Specifically, a dead millipede stands for the end of cycles relating to what a millipede represents. So, think about what millipedes stand for. They convey a message of self defense and solitude. Therefore, finding a dead millipede can be a good omen because it can symbolize the end of a period of aloneness and attack. That is, you may be moving into a phase where you are supported by strong allies and have no more need to constantly defend yourself.

So, when it comes to the humble millipede, we’re at a loss to say whether it is good or bad luck. Instead, we can say that the millipede offers a complicated set of meanings, messages, and omens. Depending on your context, it could be good luck or bad luck. For example, the millipede conveys a message of the importance of being grounded. The message could be that you are about to experience a period in life where you don’t feel very grounded! However, the millipede’s spiritual message could simply be that you’re doing a great job on being grounded, so here I am to celebrate that with you!

Ultimately, it’s difficult to tell. And as such, only quiet, personal reflection can reveal the answer.

Millipedes play an important role in South African society. In the broader region of southern Africa, millipedes are called shongololo. The word “shongololo” is taken from a Xhosa and Zulu word, which is “ukushonga”. This word means to roll up, or coil up. Therefore, the spiritual message of defense and self preservation could be more important in that particular context.

If you’re dreaming about millipedes then, wow, rather you, than me! Although, to be fair, millipedes aren’t too frightening when you compare them to some of the scarier bugs in the animal kingdom. Regardless, though, to dream of a millipede must be a striking experience. They’re quite an odd thing to dream about. Therefore, it’s easy to understand how you might feel as though there is a spiritual meaning behind the dream.

Well, the thing with dreams is that what you dream about and its meaning isn’t too different to when you see omens or experience synchronicities in the waking world. The main difference is that, in the dream world—or, the astral, as some people call it—you’re more open to receiving messages from other souls both living and those who have passed on. As such, the meaning remains the same—i.e. appreciate yourself, defend yourself, and stay grounded. However, the message comes from a kind soul who, most likely, wants what’s best for you.