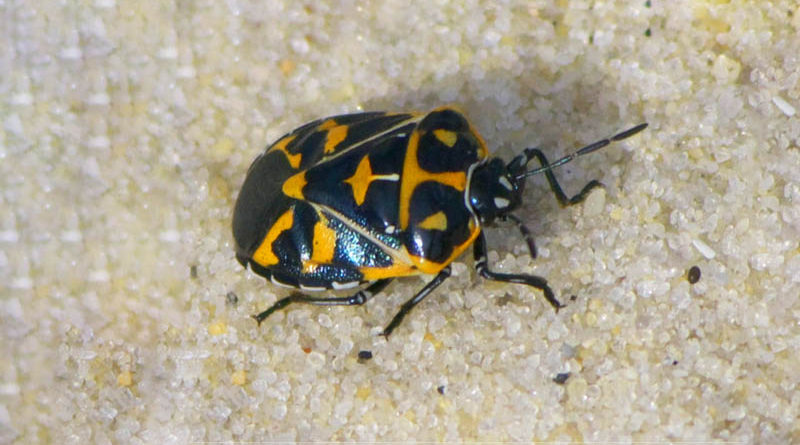 Harlequin bugs – what spiritual meanings, omens, signs, symbols or messages do they convey?

The frustrating thing about these bugs is that if you’ve seen them then you’re probably pretty bummed out. That is because they’re a major pest and are probably eating the cabbages you’re growing in your garden! However, they’re not all bad. There are definitely some positives to the messages and omens harlequin bugs represents. But, having said that, there’s also no getting away from the darker side of their symbolism. They’re a mixed bag!

First and Foremost: What Are Harlequin Bugs Anyway?

It’s a good question. They’re a bug that goes by many names. Maybe you know them as a calico bug or a fire bug? Regardless of what common name we give them, the species in question is Murgantia histrionica. Harlequin bugs are a sort of stink bug. They’re black and orange (some might say reddish orange). When it comes to diet, they’re definitely herbivorous. Which is a pain for us humans, because they like to eat some of the same plants we do—cabbages for example. But, they don’t stop there. In fact, harlequin bugs also like to eat mustard and spider flowers!

The most eye-catching feature of this little bug is color. They are black and orange—a highly symbolic combination.

Black is a thought-provoking color to reflect upon. In the Western World, black has several meanings—some quite negative and others less so. When asked what black stands for, it would be understandable to jump its connection with funerals, i.e. sadness, melancholy, mourning, bereavement, etc.

However, in the West we also use black to symbolize power. But, not just any old power. Black is typically used by people in authority. This is because it communicates strength, yes, but it also implies mystery, i.e. something that is difficult to be known and understood. When the aliens show up, who follows them? Why, the mysterious government officials in black suits!

But, remember, the West is far from the whole world. In parts of Asia, black is considered a protective color. Specifically, in Japan black things are seen as guardians. Their black coloration allows them to absorb evil spirits, thereby protecting you from harm.

Orange is as meaningful a color as any other. First of all, it is a summer color—so, naturally, it represents physical, emotional and spiritual warmth. This means that yes, there might be warm weather on the horizon. But, there might also be warm feelings coming your way. This is because orange stands for happiness, joyfulness—i.e. a warmth in the soul.

Also, remember where orange comes from. The color orange arises from a union between red and yellow. As such, it brings together parts of the meanings of red and yellow. Therefore, orange conveys a part of the passion we link with the color red. While red alone might symbolize romantic passion, when it is part of orange it represents a different form of passion. Specifically, you may feel passionate about your own creativity—this is because yellow represents intellect and creativity.

Also worth noting, orange is connected to the sacral chakra. This means it is associated with social experiences, especially sexual or sensual interactions. But, that is an oversimplification. To learn about the chakras in full, open this link in a new tab to read our free guide to balancing your chakras.

Black and Orange Together

When it comes to the harlequin bug, to take a message from their color we should combine the meaning of black and orange. Both colors represent a great many things. But, we can distill the meaning down when we consider them together and combined with the attributes and habits of the harlequin bug itself.

Also, consider the bug’s tough outer shell. It synergizes well with the color black’s protective properties. Therefore, the harlequin bug is a symbol of protection.

And together, black and orange combine to make the harlequin bug a guardian of warmth and good weather. Also, they stand for guardianship over the summer itself. As such, they can be an omen for a fruitful summer.

Harlequin bugs are a major symbol for fertility. In fact, they can produce six generations in a single year. As such, they don’t just represent fertility, they represent bountiful reproduction. However, they are only able to reproduce in numbers when they live under the best conditions. Therefore, if you wish to bring fertility into your life, consider the message from the harlequin bug and give yourself the best environment in which to thrive.