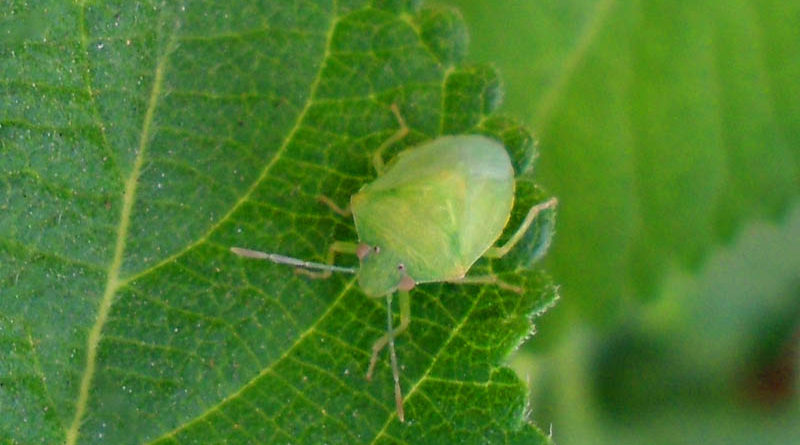 Green stink bugs—not your typical stink bug, eh? They’re usually ugly and brown. But, the green ones are kind of pretty, aren’t they? That might be why the little critter caught your eye. Whatever the reason, your interest has been captured and, as such, you’ve taken it as an omen, synchronicity, or spiritual message of some sort. And that’s where we come in—we’re going to break down the spiritual meaning, omens, symbolism and representations associated with green stink bugs.

Overall, the green stink bug is quite a positive omen. It represents a plethora of positive aspects.

It stands for natural and material abundance. Also, it brings a message of love and acceptance. Being linked with the season of spring means that the green stink bug stands for rebirth and rejuvenation. Lastly, it also stands for your personal ability to suddenly and unexpectedly free yourself from any literal or perceived shackles.

The most important and significant meaning of the green stink bug comes from its most evident feature: it’s greenness. The color green has lots of spiritual, cultural, and symbolic meaning. For example, in the West we associate green with money. As such, we think of green as an omen of incoming abundance. However, it’s worth noting that the natural world’s baseline abundance—plant growth!—is mostly green too. But it’s not just us in the West associating green with abundance, it’s a common theme across the world. For example, in China, the color green is linked to harmony, but also to wealth!

So, we can take the green stink bug as an omen for incoming monetary wealth. Remember, though, that to bring wealth into your life, action is often required. Take the message of incoming and abundance and use it as inspiration to direct your actions towards wealth building. You won’t regret it.

Green is used, the world over, as a way of representing the cleanliness and purity of the natural world. When we talk about technologies that do not damage the environment, we call them “green technologies”. As such, take the arrival of a green stink bug in your life as an opportunity to reflect on your own impact on the environment. Sure, that means you should think big picture like making sure you recycle and considering your carbon footprint. However, that isn’t all, you can also think about your own closer environment—do you have a pleasant garden to spend time in? Speaking of reducing your carbon footprint, maybe it’s time to grow your own veg instead of letting it be grown hundreds of miles away and then driven to you in trucks.

So, it may well be that the greenest of green, the green stink bug, is drawing attention to your heart chakra and is giving you an opportunity to focus on balancing it.

To learn how to balance your heart chakra, check out this article (opens in a new tab!) covering the topic.

The color green is, of course, associated with the season of spring. This is because spring is when the greenery comes back. So, therefore, the green stink bug stands for spring and is a mascot for everything spring represents. So, when the green stink bug comes into your life, it is bringing a sacred message of eternal life through rejuvenation and rebirth.

Some of mother nature’s creatures are unabashed in their demonstration of absolute freedom—the way an eagle soars, it’s no wonder it’s a perennial symbol of freedom. However, it’s important to consider that all flying creatures posses a freedom we do not. That is, the freedom to leave the obstacles and toils of the landscape behind.

Where does the green stink bug come in? Well, you might not know it by looking at it when it is happily munching on leaves, but is a flying bug. It has a very powerful set of wings hidden away under its green outer covering. Therefore, the green stink bug represents the freedom that is hidden within us all. You might not feel like a particularly freewheeling character, but that doesn’t meant that you can’t be—maybe it’s time to make that dream road trip a reality, or how about a flight to the City of Light, Paris.