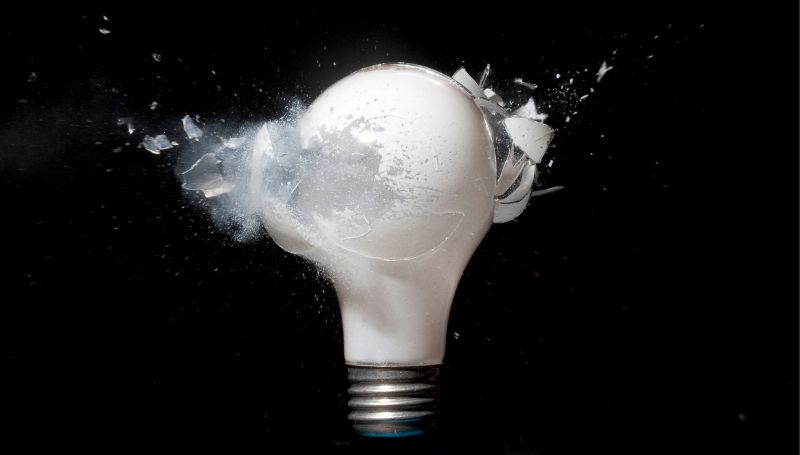 So, picture this. You’re relaxing after a long day, just chilling on the couch. When suddenly you hear a very loud pop! You look up to find that your living room light bulb has exploded! What a mess! There’s glass everywhere. Of course, naturally your first question is probably – why?! Should you worry? Is an exploding light bulb a bad sign? You may have even heard that there’s ghosts or evil spirits around! And after a few minutes, you may begin to wonder what’s the symbolism and spiritual meaning of an exploding light bulb?

Well, you’re in the right place to answer all of these questions and more. But, to immediately put your mind at ease – an exploding light bulb isn’t necessarily a bad omen. In fact, it can be a wonderful sign of a change of fortune and shattering through barriers. While the universe is full of synchronicity, you may want to check the more common explainable reasons for a light bulb exploding and possibly check with an electrician. This is especially true if it happens more than once.

After all, sometimes the message of a light bulb breaking is that you need to make sure the electricity flowing through your house is safe. Don’t underestimate this very practical message. After all, it’s much easier to clean up a shattered light bulb than replace all your belongings after a house fire. That in itself can certainly be a message of divine protection.

Still, sometimes light bulbs just explode without an obvious explanation. And, sometimes there’s definitely a spiritual message there. So, first we’ll learn a little bit about electricity and light bulbs from a spiritual perspective. Then, we’ll get into the real meaning behind a light bulb exploding.

Okay, so before we get into the symbolism of a light bulb exploding, we need to understand what electricity represents from a spiritual perspective. Electricity is current or energy that flows through our buildings to power our devices. This is very similar to the energy that flows through the universe and powers all life as we know it. So, electricity and energy are a symbol of having a connection to source and the greater universe.

So, now that we know the meanings of both of these things – it’s time to put them together with an explosion! While a light bulb can explode for many different reasons, it can also be because there’s simply too much energy, or electricity, to be contained in the light bulb. Therefore, you may want to take caution when it comes to directing your energy in the proper channels. Don’t hold back, let your energy flow and express yourself. Alternatively, this could mean that your connection with the spiritual world will soon intensify. But, we’ll get into that more in the next section. Let’s keep going.

Does An Exploding Light Bulb Mean My House Is Haunted?

Well, anything is possible – but probably not. Of course, it depends on your own spiritual beliefs and your unique situation, so take only what resonates. But, many believe that we are surrounded by deceased loved ones and other spirits constantly. And generally, there’s not really light bulbs exploding on a regular basis. Still, sometimes a light bulb exploding could be a message to pay more attention to the spiritual realms. Are you ignoring your spiritual practices lately?

For instance, maybe your great-grandmother passed away when you were very young, but recently you have been going through a similar situation that she went through in her life. Let’s say you’re thinking about her when the light bulb explodes. In this case, an exploding light bulb could be a message to pay more attention to her lessons in life. Or, simply just a message to let you know she’s nearby and helping you in your journey.

Sometimes light bulbs explode when there’s an influx of energy from the spiritual realm. In other words, it’s possible your house could have a lot of supernatural activity. But, this is rare. And, it’s important to pay attention to anything you may have done to cause it. Did you recently buy any strange furniture from the thrift store? Or, maybe you’ve started a new spiritual practice and unknowingly invited unwanted guests. Make sure to practice good spiritual hygiene and don’t buy items with bad vibes!

Now, let’s move on to the million dollar question. Is it bad luck when a light bulb explodes? From a practical viewpoint – yes it could be. After all, you’ve got to clean up glass and may even have to deal with costly electrician visits or repairs. But, from a spiritual viewpoint – absolutely not. In fact, an exploding light bulb is a pretty positive omen.

So, the spiritual meaning of a light bulb exploding can represent ideas breaking through any barriers. Think about it, the glass of a light bulb holds in the electricity, or the creative spark of a vision on a metaphorical level. Glass from a spiritual level represents breaking through invisible barriers. In many cultures, breaking glass is considered extremely good luck. Some cultures even break glass at weddings to represent the individual souls breaking from their constraints to merge into a divine union. Make sure to check out our article on the spiritual meaning of broken glass for additional insight on this topic.

The same could be said for any ideas of your own when a light bulb explodes. The veil is shattering to allow the energy or inspiration to manifest in physical reality. This is a pretty good omen that your wishes may soon come true. So, you can rest easy that more than likely good luck is on the way to you.

Symbolism Of An Exploding Light Bulb

Have you had a dream of an exploding light bulb? As always, when it comes to fully understanding dream meanings, it’s important to pay attention to how you felt during the dream. For instance, a dream you were frightened during will have a different meaning than one you were mostly happy in.

In a dream, light bulbs usually symbolize wisdom, intellect, ideas, or guidance through dark times. So, an exploding light bulb represents a change in these areas. So, if you were delighted to see an exploding light bulb, you might expect a fantastic idea or exciting news to come into your waking life soon. On the other hand, if you felt a bit of anxiety or fear about an exploding light bulb, you may feel out of control of changes surrounding you. Remember, you’re not in control of things that happen to you or around you. But, you are in control of how you allow those things to impact you emotionally and mentally. Try not to worry about the little things in life. Let the bad stuff go and focus on the good.