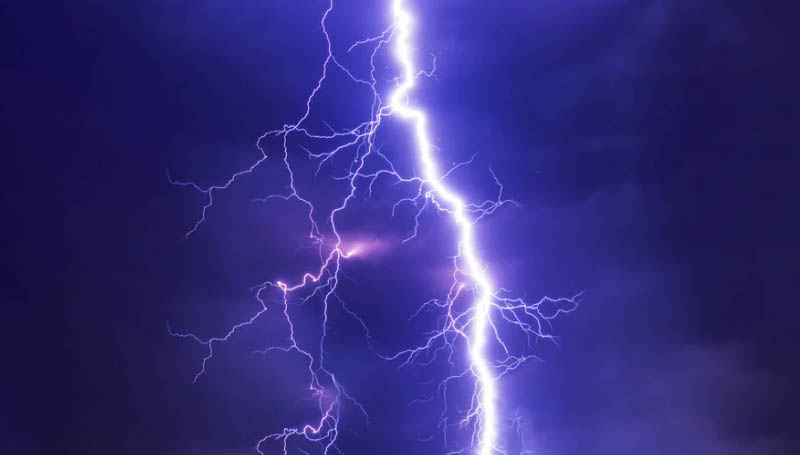 Wondering about the spiritual meaning of a lightning strike feels totally natural—after all, they come as a sudden crash out of the blue. So, of course they feel utterly divine. That’s how we’ve conceptualized lightning throughout history and across the world. Whether it’s Zeus in Greece, Thor in Scandinavia, Xolotl in Central America, or Raijin in Japan—we’ve always connected thunder and lightning to the gods.

Spiritual Meaning of a Lightning Strike

When lightning strikes we’re shook! But hopefully not shocked. A lightning strike is such an experience. Out of nowhere comes a bolt of blinding light, then a booming crash, and if you’re unlucky a tree branch might fall or be on fire. Worse yet, the lightning might have hit your house. Remember to act sensibly whenever you encounter a thunderstorm—the CDC has some sound advice to follow, open it in a new tab and check it out (you might learn something that could save your life).

It goes without saying—anybody who’s experienced one up close will know—that lightning strikes can feel like a very profound spiritual experience. It feels as though the powers of nature, the gods, or the universe itself has tried to get your attention in a mighty way. That’s a big part of the spiritual meaning of a lightning strike. There’s more to it than that, though. Lightning strikes are also about sudden light, and also sudden knowledge. Remember, light is often connected with knowledge.

Let’s start with light, i.e. illumination. If we conceptualize the lack of light as a problem—i.e. we cannot see things, we cannot understand things, we are limited in how we can perceive the world around us—then a sudden lightning strike brings light to everything. Even if that light only lasts for a moment, nevertheless it’s jarring because, for those of us who’ve experienced a close strike, it’s almost as if it’s daytime for a just a moment and then it’s gone.

Well, the spiritual meaning here stems from the connection between light and knowledge. A sudden strike of lightning awakens you from your ignorance, and allows you to see the clear, stark, undeniable truth. So, when you receive a lightning strike omen, you can reflect on things in your life that you might be willfully or unknowingly ignorant of. Additionally, you can take the lightning strike as a sign that perhaps you should be taking solid efforts towards better informing yourself on particular topics. Reflect, meditate, use your intellect, and your intuition and you will soon know what areas of knowledge need improving.

It’s important to remember that, whatever your beliefs might be, that lightning strikes are an occurrence outside of our control. That is, we see them as acts of God or acts of Mother Nature, or some other divine force. As such, the illumination provided by the lightning strike can be considered divine.

And that leads nicely in to the next important facet of a lightning strike’s spiritual meaning: divinity.

For as long as we’ve been looking at the skies and wondering, we’ve attributed lightning strikes to the gods—whether that’s Zeus of Greece or Catequil of the Incas. It has always been that way. Lightning strikes are often seen as a direct communication between the divine and an individual person. The person lucky enough to receive such a message is considered to have been honored, chosen out of all the other people to receive a heavenly message.

This goes back to the previous section because knowledge from on high is knowledge received from the all seeing and all knowing. Therefore, it has to be treated as precious.

How to apply this quite dramatic sounding description to, perhaps, your more mundane day-to-day experiences though, as always, depends on your own introspection. What messages could you expect to receive from the “other side”? And when you look at your current predicaments, what messages would you want to receive from the universe (or other concept depending on your own spiritual beliefs)? Your intellect and intuition in tandem will guide you.

Lighting likes to find its way to the ground, doesn’t it? So, it often strikes the highest thing it can find, so it can flow through it down to the earth. That’s why people use lightning rods, to protect themselves from unwanted lightning strikes. However, there aren’t always lightning rods around. So, instead, tall trees tend to get the brunt of lightning strikes. This leaves them scorched, damaged, and in some cases, even dead.

It’s always sad when a majestic tree dies. It could be even worse if that death was caused by a lightning strike. This is because the damaged and dead tree could then fall onto a house or even into a road—and let’s not forget the chance to start a forest fire.

However, it’s not all bad, because, at least when it comes to spiritual messages, the striking of a tree by lightning isn’t really a bad omen. Actually, it’s a pretty good one. Trees represent so many different things. Most of all though, they represent life, and they actually represent the central point of life—this is why so many different cultures have a similar concept of a world tree from which their creation beliefs stem.

However, that isn’t the focus of the spiritual meaning in this case. This is because trees also represent wisdom, which synergizes well with the meaning of a strike lightning, i.e. sudden, divine, and brilliant illumination. So, a lightning strike to a tree is a very holy occurrence—the tree itself is a holy symbol, the center of all life, and the lightning strike is a message from the celestial divine. Together, the tree and the lightning represent shocking, ancient, and significant knowledge.

Lightning Strike on Your House

The house—your home—is a very symbolic, spiritual, and important place. The home represents many different things. For example, the home represents family, safety, security, and the self. The last one there—the self—is important too because anything that interacts with the house can be taken as a spiritual message about a potential interaction with you, your body, your soul, or your mind—that is, the many different ways you might conceptualize yourself.

Therefore, when lightning strikes a house—your house—then the meaning can be multifaceted.

Lightning, the Home, and Family

Let’s start with the concept of the home as a part of the family. Of course, first and foremost the concern is for safety when lightning strikes your house—take all the correct, appropriate, and sensible actions. But, when it comes to the spiritual meaning, it’s all about bringing a brilliant shock of light and knowledge to your family.

What the knowledge is, though, is difficult to say. There are many things it could be, but if it resonates with you, then you’ll likely already know what this relates to. It could be to do with the family as a whole gaining the gift of new, useful, or even powerful knowledge. It also could be to do with an individual in the household using new knowledge for the betterment of the whole family unit.

The Home as the Body, the Self, the Mind

So, in terms of a spiritual message, it relates to you personally receiving the divine gift of sudden, significant, and ultimately illuminating knowledge. As such the sudden strike of lightning could mean you’re due for a light bulb moment. So, in the coming days, keep an eye for opportunities to learn something fast and easy—the kind of new knowledge that could completely transform life, just like a bolt out of the blue.

Lightning and the Gods

Since time immemorial, all over the globe, we have associated lightning with the gods. Here is a list of some of the gods linked with thunder and lightning.

The meaning of that message, though, remains overall the same. A lightning bolt comes as a form of illumination—it’s a gift from the universe that lights up all of the darkness and uncovers secrets and reveals a wealth of knowledge to you. As always though, you must be open to receive that knowledge. It might not be entirely evident at first, but with thought and reflection your intellect and your intuition will guide you to the answer.