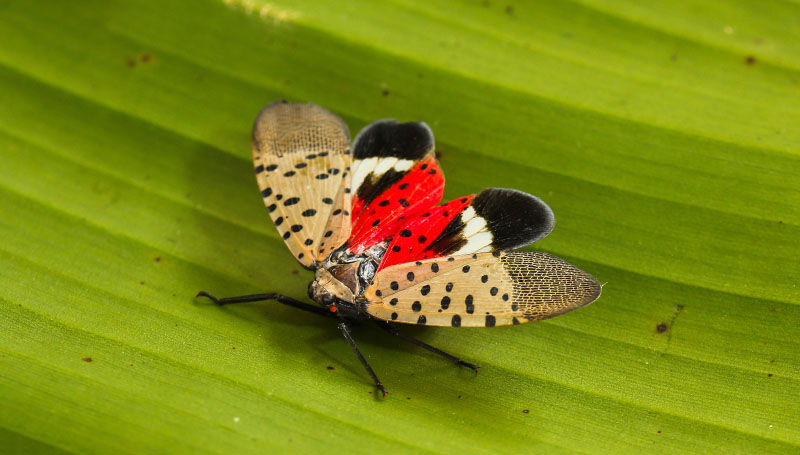 The invasive lanternfly has been all over the news lately. They’re a terribly destructive pest that has caused widespread damage to crops across the Northeastern United States. Originally from China, the lanternfly was first discovered in Pennsylvania in 2014. Since then, it has spread to eight other states, wreaking havoc on agriculture and natural ecosystems. So, we thought it was a good time to look at the spiritual meaning associated with spotted lanternflies.

Insect plagues have long been seen to convey religious or spiritual meaning. In many cultures, insects are seen as messengers from the gods, and a plague of locusts or ants can be interpreted as a sign of divine displeasure. Insect plagues also feature prominently in the Bible, where they are often used as a punishment for sin. In the Book of Exodus, for example, God sends a swarm of locusts to devour the crops of Egypt after Pharaoh refuses to let Moses and the Israelites go free.

Can we place the same divine importance on the current plague of spotted lanternflies? Probably not, but we can use their presence as a cue for spiritual reflection and analysis of the symbols around us.

In spite of being thoroughly unpleasant creatures, bugs that are invading non-native spaces the world over, spotted lanternflies are, nevertheless, spiritually and symbolically significant creatures.

The spotted lanternfly is a problematic creature that has come to symbolize transformation, balance, and passion. While the lanternfly is considered a destructive pest, it is also seen as a sign of change and new beginnings—it is an emblem for transformation.

Spotted lanternflies are seen as pesky creatures, invaders that destroy our crops and flower gardens. But in general, all bugs—spotted lanternflies included—convey a spiritual message of transformation and change. This is because bugs go through a process of metamorphosis, transforming through several larval stages before reaching their adult form. In each stage, the bug takes on a different shape, until it finally becomes a fully-grown insect.

This process of change is often seen as a metaphor for the journey of self-discovery and growth. Just as a caterpillar must undergo a radical transformation to become a butterfly, so too must we shed our old forms and emerge as our truest selves. In this way, bugs can represent the transformative power of nature, and the endless potential for growth and regeneration.

So, if you encounter a spotted lanternfly (and you will, they’re everywhere!) then you could be receiving a message to focus on transforming yourself. This message doesn’t have to be as drastic as you might first imagine, it could be as simple as adjusting a few habits in your day-to-day life. Alternatively, it could be something on a bigger scale—maybe it’s time to pick up a new hobby, consider a social or professional change, or think about that once-in-a-lifetime vacation.

What Do The Spotted Colors Of The Lanternfly Mean?

The spotted lanternfly is a light gray with dark spots and a striking patch of red under its wings. While it is an invasive and destructive species, it is nevertheless an attractive looking insect. The light gray coloration with dark spots is reminiscent of a ladybug, while the red patch on its wings gives it a distinctly unique appearance. In spite of its destructive nature, the spotted lanternfly is still a beautiful creature.

Black And White / Yin And Yang

The dark spots on the light background are reminiscent of the yin yang symbol.

The yin yang symbol is one of the most popular and recognizable symbols in the world. The equal parts of black and white represent the perfect balance of light and dark, good and evil, male and female. And, with each half of the symbol, there is a seed of the opposite color—in the black side, there is a white dot, and vice versa. The presence of yin in yang and yang in yin is meant to show us that one has a seed of the other and roles can easily be reversed.

As advice, the yin yang symbol is a reminder that we must find balance in our lives if we want to be happy and fulfilled. “Finding balance” can be quite a cliché in the spiritual community. However, in terms of black and white, and the concept of yin yang, it can mean to consciously embody the appropriate energy in order to find balance with other people and your environment. So, if somebody comes at you with big yin energy, then offer them yang so as to avoid conflict and engender harmony instead.

While spotted lanternflies might not be the best fliers, when they do spread their wings you’re in for a treat. Under their spotted wings, is a patch of striking red! So, what’s the spiritual meaning of the red coloration of the spotted lanternfly?

As such, the spotted lanternfly can imply a message of strong emotions. It comes as a message or omen to reflect on where your feelings are most intense. Of course, sometimes, strong feelings are justified. Whereas, at other times, we might be overreacting.

For many people, red has spiritual significance. It is seen as a sacred color that represents life and energy, passion and fertility. In some cultures, red is associated with luck and good fortune.

So, alternatively, perhaps the spotted lanternfly has come as an omen of good fortune and abundance.

Some cultures believe that the sudden appearance of a swarm of insects is an omen of bad luck. The insects may be seen as a sign of impending danger or as an indication that someone has displeased the gods. In some cases, the insects may even be thought to be the spirits of the dead, come to haunt the living.

This belief certainly rings true with the spotted lanternfly. After all, it is an invasive species famous for decimating crops and destroying flower gardens. As such, it would be fair to see the swarms of invasive spotted lanternflies infested in Northeastern United States as a positively worrying omen.

If you do have an infestation of spotted lanternflies around your house or in your yard, it’s important to contact the authorities for advice on exterminating them as an invasive and damaging species. But, that’s only half the battle, you can also consider it an opportunity for spiritual growth. Perhaps you can reconsider your relationship with your own personal spiritual beliefs.

The spotted lanternfly is a destructive and invasive species that has the potential to cause great harm to its non-native regions. However, despite this pest’s negative qualities, there is also a thought-provoking spiritual meaning associated with it. This insect can be seen as a symbol of transformation, balance, and passion. Although their arrival is certainly unwelcome, and we should definitely do what we can to eradicate spotted lanternflies, we can, nevertheless, use it as an opportunity for spiritual reflection.

While they may be gross, we’re fascinated by bugs and creepy-crawlies here at Symbols and Synchronicity. Our passion for these little critters goes so far as to have inspired a raft of articles. Here are some of the best ones, check them out!