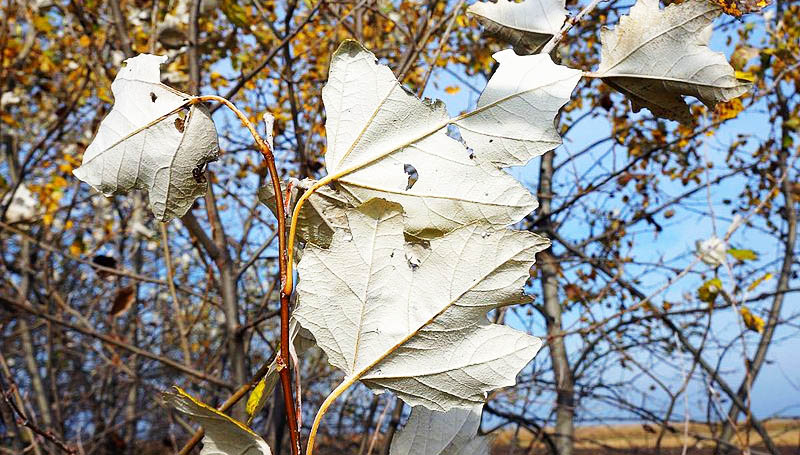 White trees are, of course, eye-catching. This is because, simply, they’re quite unusual. But, it’s not just that, white itself is a color bubbling with symbolism. No matter the culture, white (and its opposite, black) convey potent spiritual meanings. Like the color white, trees are the focal point of many spiritual beliefs. So, when you combine them—white and trees—what do you get? Read on to find out.

Before we consider what the specific spiritual meaning of white trees is, we have to first build a foundation of understanding. To do that, let’s think about what trees mean in general.

So many different cultures have a concept of the “World Tree”. Of course, there is Yggdrasil, the Norse World Tree. But, Yggdrasil isn’t the only World Tree—check out this list:

Trees are strongly associated with wisdom. This is because of their longevity—after all, the oldest tree is believed to be five thousand years old! If you haven’t picked up a bit knowledge in five thousand years of experience then good luck! We also can’t forget the Bible’s Tree of Knowledge. So, in many cultures and religions around the world, trees are typically linked with knowledge.

A deciduous tree’s habit of shedding its leaves in the autumn gives the appearance of death. Then, when the spring comes around, the tree grows new, bright, vibrant leaves—i.e. it appears to have come back to life. Therefore, naturally, trees are associated with the endless cycle of birth, life, death, and then rebirth. A tree’s ability to be reborn in the spring informs our beliefs about reincarnation and other beliefs concerning eternal life.

Of course, not all trees shed their leaves for the duration of winter. Some trees are evergreen. However, evergreen trees are also connected to our understandings of life and death. Because an evergreen tree never sheds its leaves/needles/etc, it endures as a symbol of eternal life. Furthermore, in the depths of winter, evergreen trees symbolize hope because they endure in the cold.

Okay, But What About White Trees?

White variants of animals are very symbolic. For example, a white elephant symbolizes the conception of the Buddha. Whereas, in some Native American cultures, a white buffalo is a symbol of fertility.

When it comes to applying white to trees, the message is a little different. But, the meaning does dovetail well with the general meaning of trees. This is especially true when we think of trees as symbols of life, death, rebirth, and eternal life. This is because the color white is a symbol of death in some Asian cultures. While, in the West, white flowers are gifted to the chief mourner. The white flowers represent the peace found in passing on from the toil of the living world, to the peaceful world of the dead. Hence, peace lilies are often gifted.

So, does this mean you should take a white tree as an omen of an incoming death? No, absolutely not. Rather, it comes to us a message of the serenity found by our loved ones on the other side.

What About Specific Types of White Trees?

Good question! There are lots of different types of white trees. And each of those different species of tree convey their own specific messages.

Brigid is the goddess of wisdom, so there is that link between trees and wisdom again. Also, Brigid is a powerful goddess of protection. But, that’s not all that Brigid represents. She is also the Celtic goddess of poetry, healing, blacksmithing and domesticated animals.

Furthermore, the silver birch is linked to May Day. This is because, in the Czech Republic and Romania, silver birches are used in the May Day festivities.

The white popular isn’t quite as white as the silver birch. In fact, only the underside of its leaves are white while the upside of the leaves are green. The trunk of the tree, though, is quite light in color. From our perspective below, the white popular appears to be a very white tree.

The ancient Greeks and Romans believed the white popular had very special meaning indeed. Their beliefs around the white popular centered on Leuce (Leuke); she was a nymph, the daughter of the titan Oceanus. Hades, the god of the dead and of the underworld, fell madly in love with Leuce. He was quite unreasonable about his passion, so (of course), he abducted Leuce and took her with him back to the underworld. There, in the underworld, Leuce lived out her life. Eventually, when she died, she was turned into a white poplar and placed in the Elysian Fields.

Have you heard of Dekanawida, the Great Peacemaker? Well, he is an important figure to the Iroquois Native Americans. Dekanawida was a very special and important man, because he was able to finally bring peace to the six Iroquoian-speaking Native American tribes. But, not only did he bring peace, he also fostered a union between them that was known as the Haudenosaunee (Kayanerenh-kowa or the Iroquois Confederacy).

What does this have to do with white trees? Or, specially, the white pine? Well, the Haudenosaunee chose the white pine as their emblem. The white pine was chosen for its white roots (symbolizing peace). Also, the roots of the white pine spread out in all directions, spreading peace across the land, i.e. “Great White Roots of Peace”. If others wished to join the union, it was symbolic that they must follow the peaceful roots in order to shelter under the protection of the white pine.