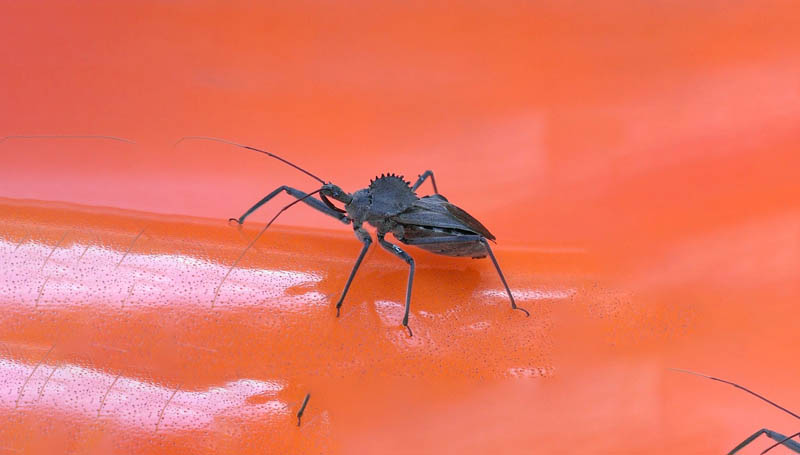 Had a wheel bug sighting? You might be wondering what separates an everyday occurrence and a synchronicity. Well, of course, that’s debatable. But, when it comes to receiving messages from the other side, a lot rests on your instincts. And seeing a wheel bug is no different. Your intuition will tell you whether or not there is meaning behind your encounter with a wheel bug.

What Are Wheel Bugs Anyway?

Wheel bugs are quite frightful bugs. They’re large and ferocious-looking for sure. Moreover, they’re known to pack a very nasty bite indeed. Technically speaking though, they are a member of the order of true bugs and their scientific name is Arilus cristatus. They’re an inch and a half in length (3.8cm), which is pretty big for an insect! Their dull grayish color makes them hard to spot. But once you do see them, you surely can’t misidentify them. This is because they have a menacing, defensive feature on their backs—a jagged wheel that sort of looks like a saw wheel from an old-timey lumbermill.

Are Wheel Bugs a Good Omen or a Bad Omen?

Some things are broadly seen as good or bad omens. Unfortunately, though, the wheel bug enjoys no such clarity. Whether or not it is a good or a bad omen is debatable.

For example, wheel bugs are omens of death, but not necessarily literal death. Therefore, they represent the end of a cycle and whether that is a good or a bad prophecy really depends on what happens after the end—for example, you could lose your current job, but then you might go out and get a better one afterwards!

Also, wheel bugs represent self defense. So, the ability to defend yourself is pretty good, right? But, on the other hand, it could mean that you’re about to be the victim of an attack of some sort or another.

So, it’s an impossible question to answer. In some ways wheel bugs are a good omen, but it really depends on your perspective and the ultimate outcomes of its predictions.

On account of their status as ruthless assassins, the wheel bug is a noteworthy omen and symbol of death. This doesn’t have to be as unpleasant or frightening as it might seem at first. Death omens don’t always predict an actual, literal death in your circle. Typically, they stand for the end of a cycle. It’s important to remember that when a cycle ends, something new will grow in its place—that means it could be something overwhelmingly good for you.

For those of you that’ve been bitten by a wheel bug, you’ll know that its bite is quite sudden and extremely painful. This facet of the wheel bug plays into its symbolism of death. Specifically, the wheel bug represents a painful and challenging end to things. As mentioned above, it doesn’t necessarily predict a literal painful death, but rather it suggests a challenging end to a cycle. To reiterate: even if an ending is painful or challenging, what grows after the old end can be wonderful and beautiful.

Color is a good place to start when unwrapping the spiritual and symbolic meaning of something. This is because colors convey so much meaning.

However, the wheel bug isn’t a particularly colorful creature. But, that doesn’t mean there isn’t meaning to be gleaned there. The adult wheel bug is mostly a gray sort of color. Gray is a very meaningful color. In the West, we tend to link it to depression and, especially, a lack of emotions—i.e. dullness and colorlessness. And also, gray stands for a general sense of coldness. This representation of coldness is especially relevant for the wheel bug because of the cold, calculating way it hunts other insects.

However, that isn’t all there is to the color gray. This is because gray also represents the space in between the two extremes. As such, the wheel bug conveys a message of understanding and appreciation for multiple perspectives and opinions. However, while it represents understanding, the grayness implies understanding without compassion.

Wheel bugs aren’t only gray though. In fact, when they’re young, they’re actually black and red.

Here in the Western world, black stands for power and authority, as well as evil, and, of course, death. This color’s association with death is what makes it our color of choice for funerals. Moreover, though, black is also a somber and respectful color which adds to its appropriateness for incidents of bereavement.

Red, on the other hand, is very much a living and lively color. It represents the unshakeable passion of life. And how does that passion manifest? Well, it could be anger leading to violence and, thinking of the color red, bloodshed. However, it could be that the red symbolizes passionate love.

The wheel bug conveys a message of resolute personal defense. Its spikey carapace is an undeniable omen that, should an attack come your way, you possess the inherent qualities and defensive capabilities to thwart that assault. Remember, all bugs have a hard outer shell designed to protect them and give their bodies rigidity and structure. But, the wheel bug has something more, it has the spikey protrusions designed to make its defenses offensive to any attackers in that, should you take a bite of a wheel bug, then you’re going to feel those spikes.

Generally speaking, insects symbolize a sensitivity to the physical world around them and to the spiritual world beyond them. The reason for this is their use of feelers or antennae to sense their way through the world. The bigger the antennae, the more sensitive the creature is considered to be. For example, the katydid has antennae longer than its body! So, naturally, it is thought to be a strong symbol of intuition. While the wheel bug’s antennae aren’t quite as big as the katydid’s, they’re not small either—as such, the wheel bug is a symbol of sensitivity to the unseen realm in its own right.

As mentioned above, the wheel bug is a ruthless predator. But, it doesn’t only symbolize death and, therefore, the end of cycles. The way in which the wheel bug hunts is symbolically and spiritually significant. The wheel bug stands for resolute patience combined with rigorous planning. This is because the wheel bug moves very slowly, allow itself to go unnoticed as it stalks its prey.

This means that the wheel bug could be appearing in your life as a message from your angels to take it slow! If there are important tasks and goals in your life you are trying to achieve, then don’t skimp on the planning phase. That’s not to say you should use this advice as an excuse to never take the plunge. Instead, use your intellect and intuition to spend the right about of time planning your projects before executing them.

Like its relatives, the wheel bug goes through a larval stage before transforming into its adult form. As such, it endures as a significant symbol of metamorphosis. This is a common message from Mother Nature about our innate gift to transform ourselves. Whatever image you have in your mind of what you would like to become, you can achieve it with the right choices and actions—don’t shy away from transforming who you are to become who you want to be. You can do it.

To dream of a wheel bug carries the same potential for spiritual meaning and messages as seeing one in the waking world. However, a dream often carries extra meaning. Dreams represent your link to two things. Firstly, your link to the “other side” and, secondly, your secret depth of feeling and emotion. As such, to dream of a wheel bug can be a particularly noteworthy message from your angels regarding the end of a cycle in your life and your ability to defend yourself from external attacks.