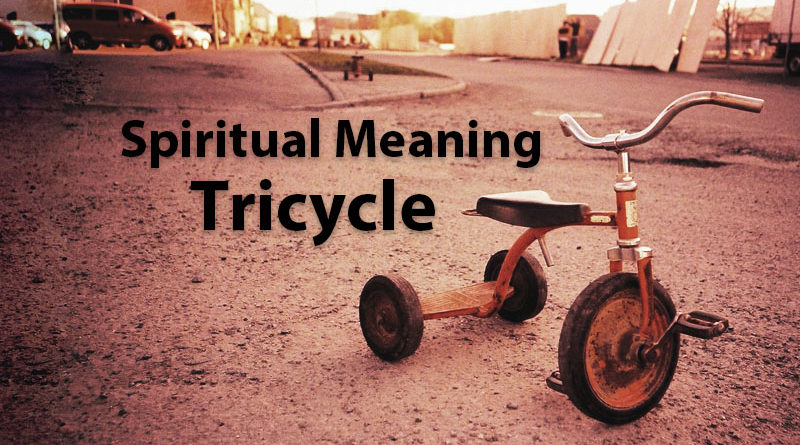 Tricycles, what do they mean? Sometimes that particular thing—in this case, a tricycle—just keeps appearing to us. Maybe the thing appears literally, maybe you see actual tricycles time and time again. Or, maybe the thing appears to you in a dream. Alternatively, the significant object in question could appear in art, movies, tv, music, etc. Either way, when you come into contact with the same thing enough times eventually you start asking the question: what does seeing a tricycle mean?

Well, let’s get into it!

Tricycles and Symbolism of Motion

First and foremost, let’s look at the very basic reality of a tricycle. It is a device for motion. So, if tricycles are appearing to you it could be time to reflect upon how things are moving ahead in your life. Is it time to get on your bike (or trike, as it were)? It could be that it’s time to act on that one dream project you’ve been stalling on for so long? Or maybe it’s time to really examine if your current job is taking you where you need to go? And the same applies to relationships in your life. Who’s along for the ride and who’s stopping the wheels from turning?

Tricycles as a Symbol of Stability

As mentioned above, the tricycle is a vehicle. But, it stands out because of its third wheel. The third wheel adds stability over a two-wheeled bicycle. So, therefore, we can take the trike as a symbol of motion forward—or a tool to move forward, as it were—but a stable forward motion!

As such, if you are considering pushing ahead with big decisions, do so with stability at the forefront of your mind, i.e. yes, make moves to better your life. But, perhaps be risk averse for the time being. If you have a plan you’re trying to execute, then perhaps you should take the extra time to add “a third wheel” to your blueprint. You know, just to make sure the whole thing doesn’t fall flat!

Tricycles are what we have before we’re big enough, ugly enough, and old enough to ride a real bike! Therefore, a trike can be a symbol of childhood.

As such, reflect on your childhood. This is especially true if you had a trike as a little one. From there, what that means to you will become apparent in reflection. For something personal like this, the meaning is (of course) very personal. Therefore, no broad meaning can be gleaned.

However, tricycles are a symbol of not simply “childhood” or specifically “one’s childhood”. Additionally, they are a symbol of naivety, i.e. you lack the skill required to ride a two-wheel bicycle. But, you are working on that skill by starting with a tricycle. As such, look at your life, and examine the skills you are wanting to pick up. Is there something you are trying to do but you just don’t have the skills required? Well, heck, take the hint and go back a step: learn to walk before you learn to run. That’s okay. Take your time to master a skill before moving up in gears.

Tricycles and the Number Three

Tricycles have three wheels, and therefore the number three has to be considered. The full meaning of the number three is beyond the scope of this piece. However, we can take a quick look at it.

Three points form a triangle. The triangle is an important shape symbolically because it has a beginning, a middle and an end. Therefore, it represents completeness. Going back to the section on stability, it is the triangular configuration of wheels that creates the stability (i.e. completeness) of the tricycle. So, moreover, consider stability.

Three is an undeniably important number in many cultures. For Christians, it represents the Holy Trinity. Also, in folklore, three is ubiquitous: three little pigs, Goldie Locks and the Three Bears. Also, going back to Christianity: three wise men. So, three should typically be something to be paid attention to.

Three is also significant as a life path number—read about it on feliaciabender.com here.

The Tricycle, a Symbol of the Third Wheel?

Finally, examine the relationships in your life. The idiom of the “third wheel” could be relevant. So, look at your life and your relationships—are there any situations where a metaphorical “third wheel” is involved? Is there a third person negatively affecting your relationship? Conversely, it could be a sign of the opposite, i.e. you are an integral part of a group of three friends and together you create an important whole.

Which it is for you can only come from reflection on the topic.