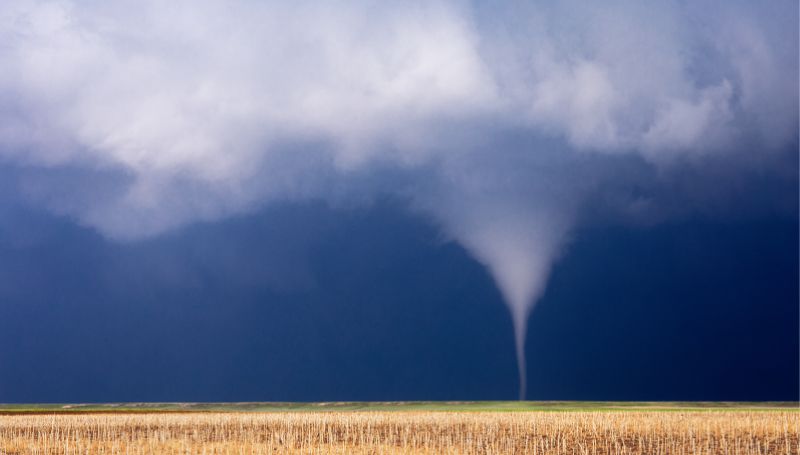 Let me start by being entirely transparent. As a child, I was obsessed with tornadoes. I read many, many books about them. I watched hours and hours of movies and documentaries about them. My obsession mostly stemmed from an intense fear of tornadoes. They were simply so immensely powerful, destructive, and chaotic! In fact, I used to sleep in a closet at night anytime there was a tornado watch in fear of them. Now that I’m older and I’ve even witnessed a few tornadoes, I’ve chilled out a little bit. But, still, I can’t help but wonder why I was so obsessed with tornadoes growing up. And, more importantly, what’s the spiritual meaning of a tornado?

If you’re reading this article you’ve probably either had a recent encounter with a tornado. Maybe you’ve had multiple tornadoes pop up in your life in movies or on your social media. Or, perhaps you even had a dream about one. I’ve had several of those myself. Tornadoes can be memorable but frightening! So, why are these tornadoes appearing in your life? What spiritual symbolism are you meant to understand?

First things first, it helps to understand why and how tornadoes form. While we won’t go into great detail here because of length, believe it or not, no one knows entirely why tornadoes form in every situation. It’s generally thought that in most cases tornadoes form when cold air meets warmer air. But, lots of research is still necessary! Check out this link for more information. But, generally, it is the mixing of different types of air that causes tornadoes to form. So, what does air and wind symbolize spiritually?

As we wrote in the spiritual meaning of wind, air represents thoughts, logic, and the intellect from a spiritual perspective. But, more than that, the element of air represents our very breath, it is thought of the life force behind our existence. It’s a very spiritual element. After all, you can’t see air and it moves very mysteriously at times. Well, except in the case of a tornado anyway! Tornadoes can be an extremely visible form of air, being seen from miles and miles away at times.

Therefore, when we are trying to understand the symbolism of the tornado, it has a connection in the chaotic swirling together of thoughts that are not in balance. In other words, if we have conflicting thoughts on a topic, we can spin them around and around in our mind much like the tornado. If we are not mindful of this, our indecision will become visible, much like the tornado becomes visible. If we continue to ignore this predicament, it’s possible to manifest chaos and destruction in our lives. That’s an intensely powerful spiritual message!

So, try to catch your thoughts before they get out of control. After all, it is very easy to overthink something to the point it is barely recognizable as the truth anymore. Try not to allow yourself to be overwhelmed by your thoughts. If you are making a logical decision, try to balance all possibilities, be fair, and remain neutral.

On the other hand, if you are trying to use logic to make a decision that requires emotions, you may want to rethink your approach. It’s very easy to work yourself into a whirlwind when you use the mind to make decisions that should come from the heart.

Seeing A Tornado In The Distance Spiritual Meaning

So, are you wondering what’s the spiritual meaning of seeing a tornado off in the distance? Seeing a tornado in the distance can mean that if you aren’t careful and mindful of your thoughts, you may easily be swept up in them in the near future. It can also represent that thoughts of your future are overwhelming you. But, there’s another message here that’s important to understand as well.

If you are familiar with tornadoes, you’ll know that when they say that a tornado doesn’t move, it means that it’s actually coming towards you. So, if you see a tornado in the distance that doesn’t seem to be moving, it can definitely mean it’s moving towards you quicker than you realize. Spiritually, this can be a reminder to keep in check with your thoughts. Sometimes overthinking can sneak up on us before we know it! Much like a tornado.

Make sure you are taking time to quiet your mind and your thoughts. If you are not meditating, you may want to start the practice! At the very least, try to practice mindfulness. Ask yourself why you are thinking a thought and if it is beneficial or detrimental to you. It is easy for our thoughts to become chaotic and overwhelm us if we don’t stay vigilant. Stay present!

Ever see a tornado over the water? I lived by the ocean for a few years and witnessed a few tornadoes over the water, or waterspouts as they are called. So, what’s the spiritual meaning or symbolism of a waterspout? Well, if tornadoes are mostly made of air that represent thought and logic, water represents emotions and intuition. Put the both of these together spirally out of control, and you have a pretty big mess!

Spiritually, the waterspout can represent overthinking fueling emotional outbursts. Let me tell you, I have definitely been there. Maybe that’s why I saw so many waterspouts during my time at the coast! So, make sure you are not overthinking your emotions. Remember, the heart and the mind are often in conflict with one another. You must make peace with this. Ultimately, it is up to you which one you choose to listen to. But, try to make sure you are making decisions in matters of the heart from the heart.

Also, it’s important to know that not all waterspouts are dangerous. While some are, others quickly dissipate shortly after they make landfall. Spiritually, this is important symbolism to understand. Since the land represents the physical realm, this is when your whirlwind of thoughts and feelings actually come into reality.

In other words, if you are too caught up in your head and your heart, then you may need to come back down to earth! You may just be overthinking things too much until you are in emotional chaos and simply just need to drop it for a little while. Just like how some waterspouts lose their power the minute they stop fueling their thoughts with water, or emotions, instead of physical reality.

Well, storm chasing is all about thrills and excitement. After all, what’s more exciting than a tornado? But, from a spiritual viewpoint, this could mean that you’re also seeking out mental thrills. Or, even drama!

So, maybe try to take a closer look at your habits and people close to you. Are you only spending time with certain people for the entertainment or shock value? Or, are you participating in possibly destructive habits because you enjoy the chaos? While there’s nothing wrong with wanting a little mental stimulation at times, try not to participate in habits that are self-destructive. Learn to appreciate the peacefulness and stillness of life at times.

And, if you have friends that are high drama, take a closer look at these connections. Every relationship might have drama every now and then. But, if someone keeps bringing nothing but chaos over and over, it might be time to reconsider the connection.

Are you wondering what’s the spiritual symbolism of tornado warnings or tornado watches? During certain times of the year in certain areas of the world, it can seem like there’s a tornado watch all the time! So, what does it mean?

Well, first, let’s talk about tornado alerts. A watch means the conditions are favorable for a tornado. A warning means there’s one nearby and it’s time to take cover! But, spiritually they both speak to the same message. They’re both a warning to stay in control of your thoughts! It could mean that upcoming circumstances in your life might send you into an overthinking spiral if you’re not careful. So, be mindful!

Tornadoes represent the chaotic element of air and intellect at its most powerful. A tornado warning can honestly be more attention grabbing than sometimes even witnessing a tornado. The warnings are loud, they’re all over the television, the radio, and your smartphone! This could also mean that you’ll be receiving news that might send you into these chaotic thoughts. Make sure that you remain calm and centered despite the circumstances around you. Even if you receive shocking news, don’t let it overwhelm you. Spend some extra time staying grounded before you get swept away in anxious thoughts. And, spend some time meditating to quiet your mind!

Having dreams about tornadoes? You’re definitely not alone! I’ve been there multiple times. Often, dreams of tornadoes come when we are experiencing chaos in our waking life. Or, when we feel unsure about our current situations because we are undergoing some change in life. That’s because tornadoes represent chaotic energy, overthinking, and even anxiety. They’re especially common during physical moves or relationship upheavals.

When interpreting dream meanings, it’s important to pay attention to how you feel during the dream. If you feel accepting and unfazed because of the tornado, then understand this change you are anticipating is probably necessary and won’t be as bad as you anticipate. On the other hand, if you are fearful and overwhelmed, try to take some time to examine where and why you might be feeling uncertainty in your current life. Do you fear some chaos undermining your stability? If so, what can you do to change it?

On the other hand, sometimes dreams of tornadoes can be rather confusing. For instance, rumor has it that Neko Case wrote a song based on a tornado coming to her door and confessing love! This probably speaks to a whirlwind romance on the horizon, or confusion in your feelings for someone. The song is linked down below if you want to give it a listen.