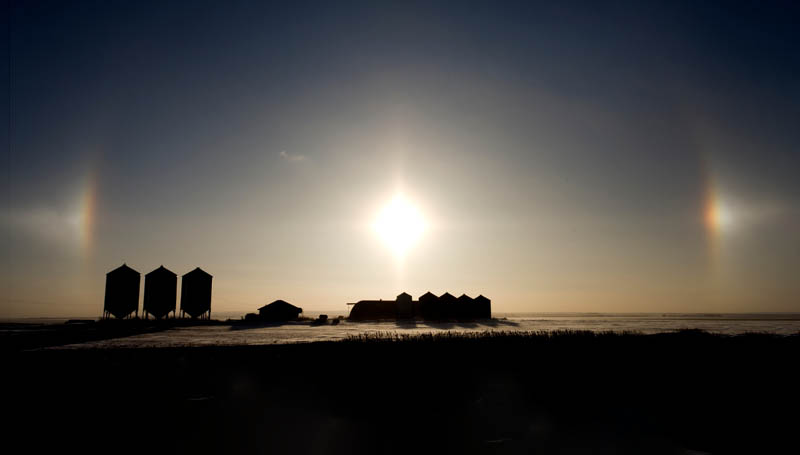 Not everybody out there knows what sundogs are. Let alone what the spiritual meaning of seeing one is. At the time of writing, the winter is on its way—therefore, as the cold weather approaches, we’ll start seeing a sundog or two again. So, naturally, I thought I’d do our loyal readers a favor and dive deep on the spiritual, traditional, and symbolic meaning of seeing sundogs.

What Exactly Is A Sundog Anyway?

Sundogs (sometimes called “sun dogs” instead) are a type of optical effect that occurs when the sun reflects off of abundant ice crystals in the atmosphere. Those little ice crystals act like prisms, bending and reflecting the sunlight. The result is a bright, colorful patch of light that appears on either side of the sun.

However, there are other optical effects that occur in the sky that are also called sundogs. For example, sometimes a colorful spot, like a patch of a rainbow without an arch, appears above some clouds—lots of people also call these sundogs. That isn’t all though, because a visual ring around the sun is also sometimes called a sundog. Although, sometimes, these are called “sunbows” instead.

And Why Do We Call Them Sundogs?

Unfortunately, according to Wikipedia, the reason we call them “sundogs” is unknown.

But, that hasn’t stopped people speculating. One such speculation asserts that when one “dogs” something, it means to follow it around. That sort of makes sense, doesn’t it? The sundog is “following” the sun.

Another possible explanation traces its origins back to ancient Norse beliefs. Across Scandinavia, there is a spiritual belief that dogs chase the sun through the sky. Therefore, when this optical effect—the sundog, that is—creates the illusion of other lights around the sun, the Norse see it as the dog in the sky chasing the sun. Hence, sundog.

Sundogs are a captivating sight, these luminous apparitions often appear as two bright spots flanking the sun. Their eye-catching appearance in the sky lends the sundog an air of spiritual importance. As such, it’s only natural that sundogs have come to have several spiritual meanings associated with them.

In some cultures, they are seen as a sign of peace on earth. This representation stems from a Navajo-Hopi tradition known as the “Whirling Rainbow Prophecy”. This prophecy suggests peace will come through equality among all people. To read more about this prophecy, check out WhirlingRainbow.com – they are a website dedicated to the topic.

So, if you do see a sundog and you have a few difficult, quarrelsome, relationships in your life, then it could be a sign for you. The sundog has conveyed a message of peace and contentment to you. It’s time to put long-standing quarrels to the side and find ways to bury the hatchet with old enemies.

Sundogs also represent an acute attunement to nature—this is an inherent part of finding peace. There’s something about being surrounded by trees, fresh air, and wildlife that instantly makes us feel more tranquil. Perhaps the sighting of a sundog is a message to pay a visit with Mother Nature and hang out in her backyard for a while.

For some people, sundogs—as they are of the sky—also represent a deep connection with the divine. Sundogs are a reminder that we can, if we wish, connect with something that expands us beyond ourselves. Seeing a sundog can be a timely reminder to examine our spiritual lives and consider the direction in which we’re going.

Multiplicity is the state of being many. It’s the state of having multiple parts or aspects. As such, it’s easy to see how a sundog—the appearance of duplicate suns—represents the concept of multiplicity.

Multiplicity can be applied to spirituality—it’s something that we all experience, in one way or another. The sundog represents all sides of our nature, even those that might seem contradictory. It’s also something we can use as a tool to better understand members of our community. Think about it, just because somebody is being unpleasant in the moment, doesn’t mean that they’re always unpleasant—give it time, they will show you their many faces as time goes by; the sundog is an emblem for this. It’s undeniable, multiplicity is a part of the human condition.

Rainbow Or Ring Around The Sun Meaning

A Ring Around Represents A Complete Cycle

A ring is a perfect symbol of completion—a ring around the sun is no different. It is a circle, which is often seen as a symbol of the entire cycle of life, including the end of life (i.e. the end of a cycle), followed by rebirth (i.e. a new cycle growing in its place).

Therefore, a ring around the sun, whether you call it a sunbow or a sundog, is a reminder that cycles come to an end, and in their place a new cycle begins. A ring is a beautiful symbol of hope, because it represents both completion, wholeness, oneness, but it also represents the infinite possibilities of rebirth.

It’s fair to say that sundogs represent good luck. After all, as we’ve discussed in the previous section, some see them as an oracle of supreme peace. Moreover, sundogs send blessings from the divine—another facet of a good luck omen.

When it comes to the sky, here at Symbols and Synchronicity, we like to think we’ve got you covered. For the spiritually-minded, the sky represents so much—it’s the connection between the heavens and the earth. The sky is how we feel connected to the power beyond and our grounded, corporeal selves.

As such, we’ve written extensively on topics relating to the spiritual meaning of the sky and sky-based topics. Check out the list below: