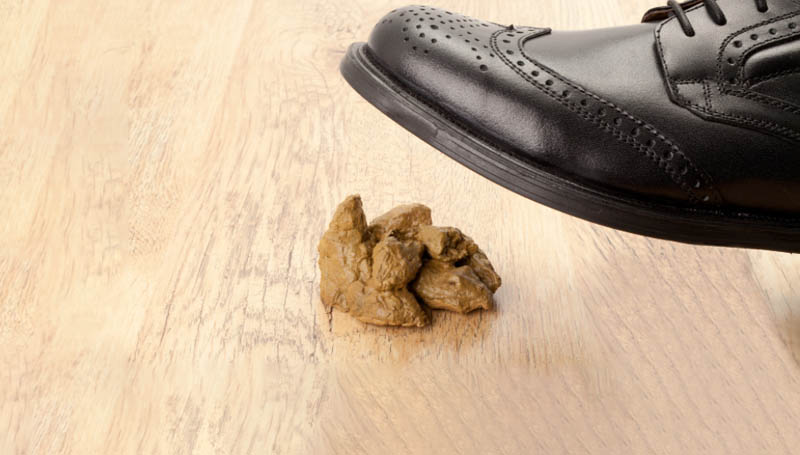 What’s the spiritual meaning of stepping in poop?

Oof, stepping in poop is just gross, isn’t it? Especially when you’ve got a pair of shoes with some nice, deep tread on them. Now you’ve got to get all that nasty feces out of the nooks, crannies, edges, and grooves in the sole of your shoes. But, hey, did you know, that in some cultures it’s considering good luck to step in poop? It’s not only that, though, there’s also a lot of spiritual meaning, messages, and even omens linked to stepping in poop.

So, in this article, we’re going to check out the general spiritual meaning of poop. After that, we’ll look at—specifically—what it means to step in poop. Then, we’ll talk about the difference in meaning between stepping in dog poop, cow poop, and horse poop. Last, but certainly not least, we take a quick look at the meaning of dreaming of stepping in poop.

When we think about the spiritual meaning hidden in the world around us, we usually think about things like butterflies, feathers, numbers, and pretty birds. Poop, on the other hand, isn’t really something that comes up commonly in discussions about omens and symbolism. But, just because the topic is a bit of a taboo, doesn’t mean that an absolute wealth of meaning there.

The main spiritual meaning associated with poop, is the concept of expulsion. It’s a multifaceted element because expulsion is to do with taking what you want, and disposing of what you don’t want. But, it also represents, as a physical object, the past—and if you don’t flush it, it’s going to hang around. Also, in bygone times, if you didn’t bury it in the latrine pit, then it would soon become putrid in the heat of the day.

Conversely, though, in addition to being something foul, poop is also something that nourishes. Ideally, you don’t want to ever use human poop as a fertilizer for your crops. However, chicken, horse, and cow manure are common fertilizers and help us grow our crops big, strong, and nutritious. As such, poop conveys a spiritual message of nature’s abundance and her boundless capacity to forever renew and enrich.

To understand what it means to step in poop, first we need to understand the meaning of walking, stepping, and especially, shoes. The act of walking is a wholly spiritual act—we consider pilgrimages made on foot to be of significant religious importance. Also, there’s something vaguely spiritual and entirely romantic about the notion of a roamer, a rover, or a wanderer—a person with no home, and journeys forever in search of, we presume, some sort of enlightenment. Lastly, walking is conducive to deep thought, it really helps us work through our problems in our minds.

Shoes, though, bring a different meaning to the able. Because, in the past, shoes were a very expensive item, and only really available to the very rich, they have come to represent both wealth and power. Different types of shoes, though, represent different things. For example, boots have come to stand for endurance—both at work and at war. While, a high heeled shoe conveys a meaning of elegance and grace.

The Past is Coming Back to Bite You?

When we consider that poop represents something expelled because it was unpleasant and, therefore, unwanted, we have to see stepping in poop as that unpleasantness coming back. But, the “unpleasantness” isn’t just coming back in an innocuous way. Instead, it’s coming back and it’s all up in your business—you can’t deny it, you can’t ignore it, you can’t fail to deal with it. You’ve stepped in it, and now it’s a mighty, horrible, terrible mess!

So, unfortunately, stepping in poop can be taken as quite an unfortunate omen. Stepping in poop predicts that some problems from your past—issues you thought you had dealt with—are going to come back with renewed energy. While this might feel like something to worry about, it really isn’t. Luckily for you, you have possibly received a message from your guardians to be on the look out for returning issues.

What those issues are, though, is difficult to say in a broad sense and, ultimately, is beyond the scope of this article. However, it is something you can reflect on—use your intellect and intuition to reflect on a problem you might suspect will return. After reflection, you might be able to take evasive maneuvers and avoid the worst of the returning problem.

As mentioned earlier, because shoes were once a rare commodity that only the rich were able to afford, they have come to represent financial wealth and power. Also, as mentioned above, poop can represent a problem—especially a returning problem from the past. So, to step in poop conveys a spiritual message that your financial wellbeing is at risk.

Again, this seems like a pretty bad omen, and to see it that way would be fair. However, it’s important to focus on the positive—an omen or a prediction of any kind isn’t set in stone. We receive messages from our guardians as warnings so that we can take immediate action to improve our fortunes. Understanding what financial risks are ahead, though, will depend on your own understanding of your personal context. That means think about your situation, and reflect on any financial issues you’ve been ignoring. Also, poop reflects issues that are returning—what past financial issues have you had and can they come back to haunt you again?

Well, we’ve had nothing but bad news about stepping in poop so far. It doesn’t have to be that way, though. Because, believe it or not, in France it’s actually considered very good luck to step in poop.

But! It’s not that simple. You see, it depends which foot you step in the poop with. If you step in dog poop with your right foot, then uh oh—you’re in for some very, very bad luck. However, if you’re fortunate enough to stop in the droppings with your left foot, then it’s all good luck for you!

To dream of stepping in poop isn’t much of a dream at all. Let’s be honest, that’s more of a nightmare, isn’t it? Whether you term it a dream or a nightmare, though, doesn’t really matter. Regardless, the spiritual meaning remains the same. To step on poop in a dream means that problems from the past may be coming back to ruin your fun. Which, of course, sounds pretty similar to the real life meaning of stepping in poop—that’s because it is. To dream of something and to experience something conveys more-or-less the same message.

So, what marks out a dream meaning as different? Well, dreams are like a TV that gets all the channels! You could be tuning in to anything when you dream. Some people conceptualize a dream as a place where different dimensions, realms, worlds, realities, sides of reality all intersect—therefore, you’re able to receive advice from specific souls via a dream. So, when you dream of stepping in poop, it could be that a kind soul out there is warning you of the return of some old problems.