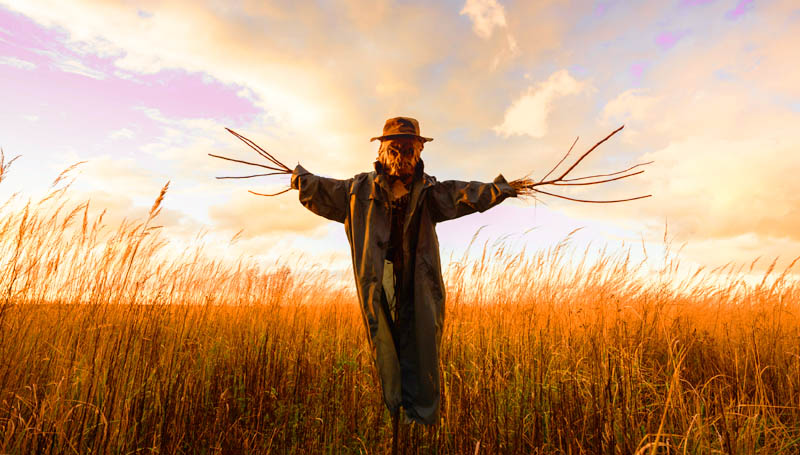 Scarecrows are classic symbols of the day-to-day farming life. They’re also commonly used to represent the harvesttime, which also stems from their use on the farm. Additionally, there’s something quite eerie about a lonesome scarecrow, watching over a field of crops as they rustle in chilling autumn breeze. There are a number of horror movies that feature scary scarecrows. With those things considered, it’s easy to understand how scarecrows have become supremely symbolic in our society.

So, in this article we’re going to be looking at the spiritual meaning of a scarecrow. Also, we’ll look at the symbolism we associate with scarecrows. We can’t discuss scarecrows without also considering adjacent traditions like the British “Penny for the Guy” custom or pop culture elements like the classic American movie, “The Wizard of Oz”. By the end of this article, you’ll have a broad understanding of the spiritual meaning of scarecrows. Additionally, you’ll be familiar with their cultural and symbolic significance.

What is the History of the Scarecrow?

To understand the spiritual meaning of a scarecrow, it’s wise to start with understanding the general history of the scarecrow.

The history of the scarecrow is a fairly easy one to imagine—animals, often birds or deer, are quite fond of gobbling up our seeds or nibbling on our crops. Ideally, the farmer could watch his crops all the time and chase away any wild animals set on devouring the crops. While, it can be quite pleasant to walk through a field of corn, it’s quite boring to sit and watch one all day long. Therefore, the invention of the scarecrow—a human-shaped decoy placed at the center of a field—was inevitable.

The precise origin of the scarecrow, though, is obscured. Of course, this is understandable because the scarecrow is such a longstanding feature of farms all over the world.

What Does a Scarecrow Symbolize?

Scarecrows are highly symbolic. They represent everything from the abundant joy of fall harvesttime to the melancholic loneliness of crippling isolation. In addition, scarecrows are emblems of deceit, trickery, and cleverness. If you’ve seen the Wizard of Oz, you might be surprised to hear that scarecrows are seen as symbols of wisdom as the character, the Scarecrow, was without brain. However, in Japan scarecrows are seen as quiet observers (and therefore, wisdom-gainers). Scarecrows also represent duty, protection, and loyalty.

Follow along with the sections below as we get into the specifics of the spiritual meaning of scarecrows.

While a scarecrow is at its most useful when a feel has just been sewn—i.e. spring. However, we associate the symbol of a scarecrow more closely with the autumn season. This is likely because, for those of us who aren’t farmers, the main time we think about farming is during the harvest period. While modern supermarkets and grocery stores tend to have all sorts of fruit and vegetables available year round, we nevertheless continue to celebrate harvest festivals.

So, with the above considered, it’s clear to see why we associate the scarecrow with the fall and, especially, with harvesttime. In the United States, scarecrows are a common decorative item for this time of year—homeowners often place a decorative scarecrow on their front porch along with a few pumpkins and a few ornamental gourds.

So, what does an association with fall mean for the spiritual meaning of a scarecrow?

Well, autumn is a season of transition—that is, it represents the end of a period of lush, verdant, abundance and the change into a period of stillness, coldness, and darkness—a period of time with little sign of life. As such, a scarecrow can be seen as an omen for change from a period of warmth and activitiy into a period of reduced activity and warmth. While this may sound like a foreboding omen, it’s important to remember that the fall must lead into winter, but ultimately spring will always come.

What Do Scarecrows Symbolize in Halloween?

Halloween and scarecrows fit like a hand in a glove—or, well, some straw stuffed into a glove.

Halloween is when we, of course, indulge in all kinds of spooky decorations and tell ourselves scary ghost stories. So, how does a scarecrow fit into this? Just look at them! They’re quite spooky-looking, don’t you think? A lonely scarecrow, human-like, but not human, watches you as it stands motionless in the middle of an empty field—it can almost feel like the darn thing is watching you.

So, scarecrows symbolize that special, indefinable, spooky feeling that we all know and love about Halloween.

Scarecrows Are Symbols of Abundance and Prosperity

The Scarecrow is a Symbol of Deception and Trickery

The spiritual meaning of a scarecrow incorporates an element of the trickster spirit. This is because, fundamentally, the scarecrow is a figure whose goal is to deceive. That is, the scarecrow is supposed to frighten away animals—especially birds—by tricking them into thinking a real person is stood in the field.

As such, the scarecrow—a fake person—represents the playing of tricks, especially those centered on people pretending to be people or things they are not. Therefore, consider the scarecrow omen as a possible sign to reconsider the relationships in your life. Ask questions of yourself and your friendships—is anybody leading you on by pretending to be something or someone they are not?

Speaking of friendships and their value, this leads us into another important consideration for the spiritual meaning of a scarecrow. Scarecrows are a compelling emblem for loneliness. That is, the humble scarecrow represents and communicates its own sad reality—it is alone. So, a scarecrow omen can be taken to represent the onset of sadness as a result of isolation.

Additionally, scarecrows are the embodiment of persona non grata. This means that they could represent yourself, or a specific person in your life, that is no longer welcome.

Sure, scarecrows have straw for brains, but that doesn’t mean they can’t stand for intelligence and wisdom! It’s easy to understand why the Scarecrow from the Wizard of Oz wanted a brain. After all, need gray matter for thinking, not hay matter!

Despite scarecrows being associated with a lack of intelligence in the English-speaking world, that doesn’t mean that they can’t represent intelligence in other cultures. For example, in Japan, a book dating back to the year 712 contains the story of Kuebiko. Kuebiko is a scarecrow deity, and as such, lacks the ability to walk. However, because he is still he simply observes all around him. Therefore, Kuebiko is able to know all about the world.

When a farmer decides to create a scarecrow, where does the outfit come from? Consider it, because it’s an important part of understanding the spiritual meaning of a scarecrow. Think about it—a scarecrow is dressed in unwanted, usually shabby, clothes. The clothes are certainly hand-me-downs.

As such, a scarecrow is a symbol of downtrodden people who are made to settle for handouts from others. So, when confronted with the scarecrow omen, remember to think of those less fortunate than you. It’s always a good time to reflect on what we can do to give people a helping hand. The scarecrow communicates a spiritual message to help bring dignity to those in your communities.

Scarecrows are, of course, utterly dutiful. That is, they will stay silent and centered in the middle of the field no matter the weather.

As such, scarecrows represent diligence. Moreover, they represent devotion. Unfortunately for the lovesick readers, the scarecrow does not represent romantic loyalty. Rather, it stands for the dutiful adherence to one’s work. So, if you are looking for an omen or spiritual meaning relating to resolving work issues and sticking it out, then the scarecrow is your guy!

Penny for the Guy

And speaking of your guy, it would be a shame to discuss scarecrows without discussing the British tradition of begging for a penny for the Guy. The Guy in this case is capitalized because it is the name of Guy Fawkes. In England, as Guy Fawkes Night (November 5) approaches, children create a scarecrow-like representation of Guy Fawkes. They will beg for money from passers by so that they’re able to buy clothes and stuffing to complete their Guy.