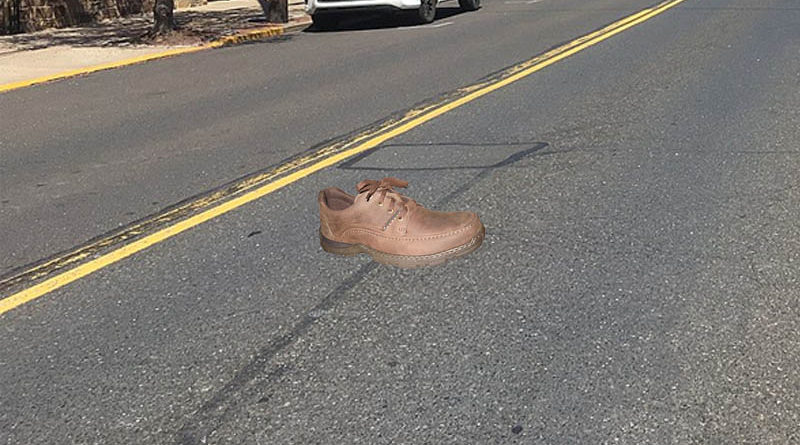 Seeing a show in the street could be taken as an omen or message directed to you. After all, there’s something mysterious and attention-grabbing about a shoe sat, lonely and lost in the middle of the street. Of course, it makes sense, because shoes are such relatable and personal items. It triggers our sense of empathy—we want to see the shoe re-united with its owner. We also want to see the shoe paired back up with its opposite number. Also, for those of us out there who are a little OCD, the sight of a single shoe can be make us feel uncomfortable.

So, it’s only natural that once the lost shoe has caught your eye, that might start to wonder, “heck, what does this mean?” Well, that’s what we’re here to answer.

Before we get into the specific spiritual meaning of a shoe in the street, first we have to lay some groundwork. So, that means putting together a quick, but solid, understanding of the general symbolism, omens, and spiritual meanings associated with shoes.

In the old days, shoes were a symbol of power and social standing. This was because a good pair of shoes wasn’t cheap. And that message continued, because it was only recently that we’ve been able to grab cheap shoes at Walmart. Earlier generations had to pay big for a pair of shoes, and then made frequent trips to the cobbler to have them repaired over the years. So, that’s the first thing to know: shoes represent wealth, power, and social standing.

Also, that is why going barefoot is a symbol of humility and noble simplicity. Think about it, whenever you see somebody shoeless in an inappropriate place to be shoeless, you immediately start asking questions. In the past it was more common for the poverty-stricken to be without shoes entirely. Whereas, nowadays people can find shoes at thrift stores and discount places, so being shoeless isn’t the same social clue it once was.

Shoes are also a symbol of travel. This is because, obviously, we typically put a pair of shoes on to go somewhere. As such, shoes are intrinsically linked to travel, movement, and motion. So, shoes represent journeys of all types: a short walk down the beach or a long journey across the country. This connection to journeys also means that shoes symbolize both leaving home and returning home.

Shoe in the Street – Good Omen or Bad Omen?

A shoe in the street is definitely a mixed omen. It isn’t an out-and-out good omen, but it doesn’t really represent anything overwhelmingly bad either.

A shoe in the street is an omen of journeys and travel. Most people enjoy travel, don’t they? But, not all travel is totally fun. It could be you have to take a long business trip that you’re not over the moon about. Alternatively, you could be taking that road trip of a lifetime. So, it’s mixed.

The next thing that could be taken as more of a negative thing (although, really, it shouldn’t be) is separation. Lost shoes in the street symbolize people leaving home and pairs being separated. It might be that a particular separation has an initially negative impact on you or the other person, but it could also be that one of you (or both) benefits a great deal from the separation.

So, to answer the question of whether a shoe in the road is a good omen or a bad omen: it’s mixed!

Shoe in the Road and Journeys

We already discussed in the general shoe meaning section about how shoes inherently symbolize a journey. The reason is simple: it’s because we put shoes on to go places. Another strong symbol for a journey is a road or a street. As such, to come across a shoe sat in the middle of the street is a like a double message, telling you about a journey!

What that omen means to you, though, will vary. The variation depends on your personal context and what resonates with you. So, when you see the shoe in the street, how do you feel? What thoughts occur to you relating to past journeys or perhaps future journeys? The message particularly pertains to a journey that needs to be properly prepared or equipped for. It’s similar to putting on a pair of boots suitable for the job!

We can’t ignore it, though: there’s something inescapably lonesome about the sight of a solitary shoe, sitting, lost and alone, in the center of the street. That shoe is supposed to be somewhere, but it somehow got lost. The shoe left where it was supposed to be, whether that was in the possession of its owner or with its paired shoe.

Following on from the previous section, it’s worth noting that a journey means leaving home. For most journeys, you either return to your home or settle into a new home at your destination. But, sometimes, for whatever reason, people leave home and don’t come back. At first, that might sound a little melancholy. But, it doesn’t have to be. Yes, the shoes in the street might be an omen that somebody has left home or will do soon. But, it doesn’t mean that them leaving home is a bad thing. After all, most people move on when they feel the time is right, and they’re in search of a new home and a new experience that better fits them. That’s a good thing.

Another factor to consider when investigating the omens and spiritual meaning of a random shoe in the street is the fact that shoes are made in pairs. However, most of the time when we drive by a shoe in the street, it’s on its own. For whatever reason, the shoe has been separated from its partner. As such, a lonely shoe in the street can be an omen of a coming or past separation. Again, like the leaving home omen, it doesn’t necessarily have to be a bad omen. It could be that somebody you know is leaving a troubled relationship.

One last thing about separation: have you considered it could be a message for you and your current situation? If you’re in a troubled relationship yourself, always remember there is professional help available. You have support out there that you can access, and people will help you exit a bad situation. You’re never alone.

You might remember from the introduction that we discussed how shoes are a symbol of financial status. For a long time, shoes were expensive items that were continuously maintained for many years. It’s not common to see a cobbler these days, but back in the day shoe repair shops were everywhere. People valued their shoes a great deal because they were so darn expensive.

As such, to see a lost shoe in the street is an omen of lost money. But, it’s more than just that. This is because shoes belong in pairs. So, to only see one shoe and not two shoes, is a sign of financial instability. It’s not the end of the world to get a seemingly negative omen like this. Instead, take it as help from your angels regarding your material situation—take time out to consider your financial situation, job situation, and examine opportunities to welcome even more of nature’s abundance into your life.