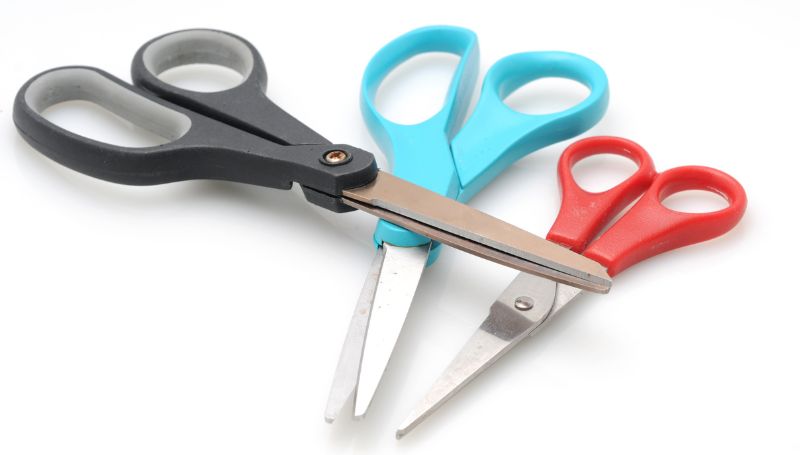 First things first, it helps to get a basic understanding of the role of scissors. Well, obviously you use scissors to cut things, right? Your first image of using a pair of scissors might bring you back to school when you used them to cut paper into shapes for crafts. But, what do most of us actually use scissors to cut in our current modern lives? Usually it’s to open packaging. Or, maybe it’s to cut a string or trim hair.

Therefore, scissors are symbolic as a tool to release us from things that are unwanted or keep us bound somehow in life. So, it might be time to free yourself somehow! But, the spiritual meaning and symbolism doesn’t just end there.

Scissors And Thoughts As A Tool

When we’re trying to understand the symbolism of a pair of scissors, it’s important to pay attention to every detail about them. So, we already know they’re used to cut things. That’s their use. But, let’s think about their traits. Most obviously, they’re pretty sharp! And then, well, they’re usually metal.

From a spiritual perspective, metal often symbolizes cold, hard logic and thought. Very similarly to swords imagery in tarot, sharp metal tools represent our mind, judgement, and intellect. So, it’s important to remember that our thoughts are tools as well. And, a tool like a sword, or even a pair of scissors, can be very useful. But, they can also be harmful to ourselves depending on use.

So, a pair of scissors can be a message to be extra mindful that you aren’t overthinking. This is especially important when it comes to considering what to cut from your life. If you know something isn’t good for you, let it go without overthinking. Often times we only overcomplicate things by overthinking. Trust me, I speak from years of experience. But, as always, make sure to follow your own intuition and judgement. Ultimately, you know what’s best for you. And, if you’re having any trouble with this, it might be time to get some professional advice to help with mental clarity as well.

No article written on the spiritual meaning of scissors would be complete without mentioning the connection between witchcraft and scissors. Many practitioners of witchcraft will have ritual scissors that they use to symbolically cut threads. Or, for more practical purposes like cutting herbs or trimming various items for spell work.

However, it is worth noting one wouldn’t want to use scissors to cut a petition paper in every case. Instead tearing the paper either towards you to bring it to you, or away from you to send it away, is more preferable. That’s because scissors represent sharp thought and abrupt endings. But, if you are looking to cut energetic ties with someone, definitely use them! Scissors are long known for their magical uses of cutting cords.

In fact, in many older midwifery traditions in the deep south of the United States, it was believed that a pair of scissors placed under the bed of a woman giving birth would help alleviate labor pains. It makes a lot of sense symbolically. Scissors can sever the ties that bond quickly, including those in the birthing process, hopefully making the process quicker and peaceful.

In some schools of belief still, this concept works even today. For instance, if you feel as if you have any negativity or undesirable entities energetically connected to you somehow, you might consider placing a pair of scissors under your bed. Just make sure the sharp edge is pointing towards your feet!

And, while we’re on the topic of scissors. Did you know there’s many superstitions surrounding scissors? One of the more common superstitions is you aren’t supposed to open and close the scissors with nothing in between them. Otherwise it might invite domestic troubles. From a spiritual viewpoint, this makes sense. After all, scissors cut energetic cords – including positive relationships!

Another superstition is that it’s bad luck to drop a pair of scissors. I mean, this one makes sense, especially if they land on your toe! But, did you know that you’re not supposed to pick them up afterwards but ask someone else to do so? It’s also said to be bad luck to gift a pair of scissors as a gift. Also, pretty reasonable from a spiritual perspective. And, it’s especially bad luck to give scissors as a wedding gift, you’re symbolically cutting the union. Yikes! Make sure to check out this article on is it bad luck to give a knife for a wedding gift for more insight on this topic.

However, if you’re looking to get rid of a negative person in your life, you might consider giving them a pair of scissors. Maybe something worth keeping in mind for that ex who just won’t stop texting you. I’m kidding, mostly. Make sure to check out this site for more scissors superstitions if you’re interested in this topic. It is certainly interesting to consider where superstitions came from when you understand the spiritual meaning of scissors better.

Are you wondering what safety scissors represent spiritually? Well, these plastic scissors are certainly less threatening than a traditional pair of scissors. In fact, if you’ve ever tried to use them you’re lucky to cut construction paper sometimes.

Spiritually, a pair of safety scissors represents that it is safe to cut ties. While it might be challenging to cut things out of your life with this particular tool that’s a little blunt, know that it is very unlikely to cause you harm. For instance, let’s say you’re considering leaving that toxic demanding job that doesn’t pay you very well, and you keep seeing safety scissors randomly. This could possibly be an omen that while it might be challenging to leave your job, doing so will only bring good things into your life. In other words, you’ll only cut that tie and not yourself accidentally. Of course, as always, listen to your own intuition when it comes to important issues like this.

Also, it’s worth mentioning that safety scissors have a connection with childhood. After all, most of us probably learned to use scissors with a pair of these in school. You may want to take a closer look at your childhood. Are you carrying any baggage from an unpleasant childhood that’s holding you back? It might be time to sever uncomfortable ties from the past as well.

A pair of rusted scissors represents that the elements around us, or our surroundings, have worn down our ability to communicate and think clearly. Rust has an association with decay and neglect. So, a pair of rusted scissors can be a symbol to be more mindful of your habits and connections to others – especially when it comes to old and outdated ones. If you consistently feel neglected in a relationship, then it might be time try to refresh the lines of communication or consider severing the bond altogether. Continuing to further neglect your needs or deny your truths will only add to more frustration and rust on the pair of scissors on a metaphorical front. Don’t allow your thoughts and connections to be deteriorated by the elements. Take care of them and yourself.

Generally, a pair of scissors in dreams symbolizes being in control of your thoughts and decisions. You have the tools and ability to cut through anything that’s holding you back in your waking life by using your mind and communicating your thoughts with clear, precise words.

If you dream of others using scissors, others may be gossiping about you. If you dream of your romantic interest using scissors, you could be fearful of them cutting you and your relationship out of their life. Some believe that dreaming of scissors at all denotes issues in relationships and family bonds. But, it’s important to pay attention to how you felt in the dream. If you were afraid in the dream, spend some time looking at any possible issues you might when it comes to fear of abandonment.