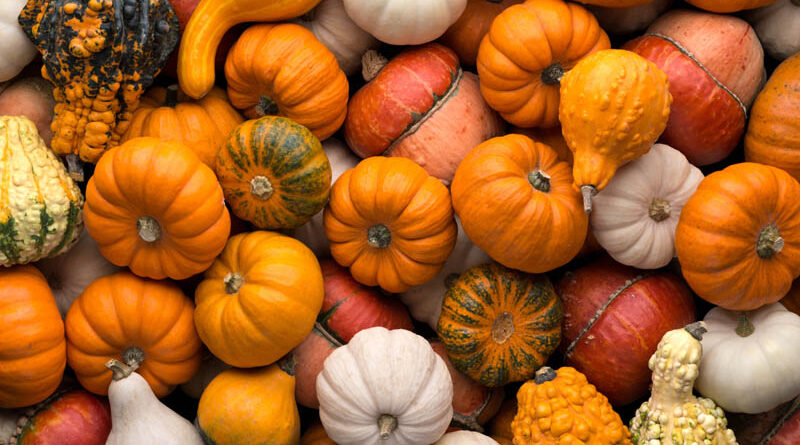 So, it’s that time of year again, the pumpkins are starting to show up on your neighbor’s front porches. As such, it’s the perfect time to ask the question—what is the spiritual meaning associated with pumpkins?

You know that feeling, don’t you? The days are getting shorter, and the hot summer days are giving way to all the festivities of autumn. It’s time to dust off the spices—nutmeg and cinnamon especially—and prepare for Halloween and Thanksgiving. Those two holidays are especially connected to the humble pumpkin. We connect Halloween to the pumpkin because of the classic jack-o’-lantern. Whereas, Thanksgiving and pumpkins go together because of the classic fall recipes for pumpkin pie and pumpkin roll.

There’s something inherently spiritual-feeling about the autumn. So, it’s only natural you might start to wonder what the spiritual meaning of all those pumpkins you’re surrounded by is. So, in this article, we’re going to break down what the pumpkin represents. We’ll be going deep, looking at things like the meaning of color, shape, and even the spiritual meaning of pumpkin seeds. In addition, we’ll consider the origins of the jack-o’-lantern. Lastly, we look at what it means to dream of a pumpkin.

Pumpkins are an evocative sight. They appear at a time of year that we often associate with the supernatural. Therefore, it’s easy to accept that pumpkins are an incredibly spiritual fruit—they capture our attention and emotions. Pumpkins represent a range of themes, concepts, times, and beliefs. All of which nudge within us a suspicion of unseen magic.

Here’s a quick list to get us started on the spiritual meaning of pumpkins:

Pumpkins, The Fall, Transition And The Underworld

In many parts of the English-speaking world, pumpkins are a critical element of the fall aesthetic. After all, they just feel “autumny” don’t they? Well, their inseparable association with fall, Halloween, and harvesttime festivals like Thanksgiving has made them prime symbols for transition.

To understand exactly why pumpkins represent a significant transition, is to understand our harmony with the seasons we experience. In the world, we see cycles: spring, summer, autumn, and, finally, winter. And then what happens? Well, spring starts all over again, of course. So, the pumpkin, being a fruit that ripens and is ready for harvest in the autumn, means that it represents a large portion of the transition in the year. The pumpkin stands for the peak of summer (i.e. life) moving into the depths of winter (death, and transition to the Underworld).

So, as we see the world “die” around us—leaves fall from the trees and animals retreat into hibernation—we naturally conceptualize and anthropomorphize that period of time. As such, it’s understandable that we celebrate things like Halloween, All Saints Day, the Day of the Dead, and Samhain at that time of year. The cultivation of pumpkins is, of course, a big part of such celebrations—decorating with them is a way we can cultivate spiritual feelings within ourselves, as well as connecting with others (present and past), while also engaging with the reality of our world and Mother Nature.

We can’t talk about pumpkins without talking about jack-o’-lanterns. Of course, pumpkins are a great food—and, made the right way, pumpkin pies taste fantastic. However, a solid case could be made, that a pumpkin’s primary purpose in our culture is not as food. Rather, the pumpkin’s primary purpose is for decoration! Hop on Instagram or Pinterest at the right time of year, and you will see some of the most fantastical carvings of pumpkins you could ever imagine.

So, what’s the spiritual meaning of a jack-o’-lantern?

The history of the jack-o’-lantern is, of course, disputed—as are many long-held traditions. However, one widely believed origin story is recounted by the YouTube channel Mythology Unleashed—it tells the tale of old “Stingy” Jack. In the UK and Ireland, the word “stingy” is a way of saying somebody is cheap, in an almost cruel way. So, naturally, the story of Stingy Jack tells a tale of a miserable blacksmith known far and wide as a mean con artist. Stingy Jack was so well known, that even the Devil himself knew of him. As such, the Devil visited Jack to claim the evil man for the fires of Hell. However, the clever blacksmith was able to outsmart the Devil. Ultimately, Stingy Jack was able to trick the Devil into agreeing not to take him to Hell.

Unfortunately for Stingy Jack, though, St. Peter would not admit him to Heaven either. As such, Stingy Jack went back to the Devil and asked if he could enter Hell. The Devil, wanting revenge, refused Stingy Jack entrance into Hell. It wasn’t in his nature to take pity, but nevertheless, the Devil felt sorry for Stingy Jack and gifted him a single flame from the fires of Hell.

Ever since, the ghost of Stingy Jack has roamed the earth, with a flame from hell, placed inside of a lantern carved from a turnip. He became Jack of the lantern, and from that came the term “jack-o’-lantern”.

It’s important to remember, though, that the pumpkin is a New World fruit. That means that it is native to the Americas—specifically, the southeastern United States and northeastern Mexico. As such, there were no pumpkins in ancient Europe where the tradition of the jack-o’-lantern originated. That’s why old Stingy Jack used a turnip rather than a pumpkin for his lantern.

However, the turnip is very rarely used for jack-o’-lanterns these days. Instead, pumpkins are used the world over.

So why did we carve our own representations of Stingy Jack’s eerie lantern? Was it to honor him, perhaps? Perhaps. However, the most common belief is that the ancestors of Europeans first carved spooky-looking lanterns for the same reason old churches are covered in gargoyles. That is, to keep away evil spirits. As such, the pumpkin carries that same association—i.e. it can be used to ward off unwanted spirits and the malign intentions of others. Therefore, for spiritual protection, one could utilize a pumpkin.

Pumpkins convey a spiritual message of abundance and prosperity. This link is understandable considering the pumpkin is an integral part of the harvest season. Not only that, the pumpkin is strongly incorporated into the American harvest traditions. Sure, jack-o’-lanterns are used in many places around the world. However, in America, the pumpkin is used to make pie, bread, and other dishes.

So, because of their presence at a time of such abundance, September though to November (i.e. harvesttime), the pumpkin represents all the abundance and associated prosperity of that time. The pumpkin’s spiritual message can be that, simply put, it’s time to eat! However, that isn’t all that makes the pumpkin such a positive symbol of abundance. It’s also that the humble pumpkin can grow quite large in meager dirt.

Pumpkins And The Sun Symbolism

Like the sun, a pumpkin is round and orange. As such, the pumpkin is an emblem of the sun and a conveys the sun’s meaning. Therefore, a pumpkin can be taken to be a message:

Above, where we compared pumpkins to the sun, we mentioned that color is important when thinking about the spiritual meaning of something. Well, it’s also important to note that pumpkins aren’t always orange. They come in a range of colors. So, below, we’re going to talk about what the different colored pumpkins represent.

What Is The Spiritual Meaning Of Pumpkin Seeds?

So, if you find some pumpkin seeds, some might say they suggest there might be a new pregnancy somewhere in your family!

Cinderella And A Symbol Of Humility

We associate pumpkins with humility. This might be due to the Cinderella fairytale. In Cinderella, the fairy-godmother takes a large pumpkin and, with a wave of her magic wand, transforms it into a grand carriage. So, this is why the pumpkin is linked with humble origins.

This is an interesting question because it’s not entirely clear whether pumpkins are good or bad luck.

Although, some might say the evidence that pumpkins are actually good fortune is fairly strong. First of all, pumpkins represent overall very positive things like abundance and protection. However, a case could be made that pumpkins are harbingers of misfortune. This is because pumpkins symbolize the transition from the world of the living into the world of the dead (i.e. summer to winter). On the other hand, though, it’s worth remembering that when something represents death or “the end”, it isn’t necessarily literal. So-called death can represent the end of a cycle, so that something new—and possibly better—could grow in its place.

What Does It Mean To Dream Of A Pumpkin?

To dream of a pumpkin is simply to receive all of the symbolism discussed in this article as a direct message. This is because some people believe dreams are a place where worlds or different realms or dimensions intersect. Therefore, according to this belief, dreams are a place where you can pick up messages from lost loved ones, for example. However, it could also be that you are visited in your dreams by people still with us—regardless, people believe the message is “direct” and therefore open to interpretation.

So, when it comes to a dream about a pumpkin, you’re dreaming of the transition between things. Unfortunately, something in your life may be coming to an end. However, there’s no reason to fret. This is because ends of cycles are not exclusively bad. On the contrary, something “bad” could end and something “good” to come in to take its place. When we consider the other meanings of a pumpkin, it’s likely that something good could be on its way—this is because to dream of a pumpkin is also to dream of abundance and fertility.