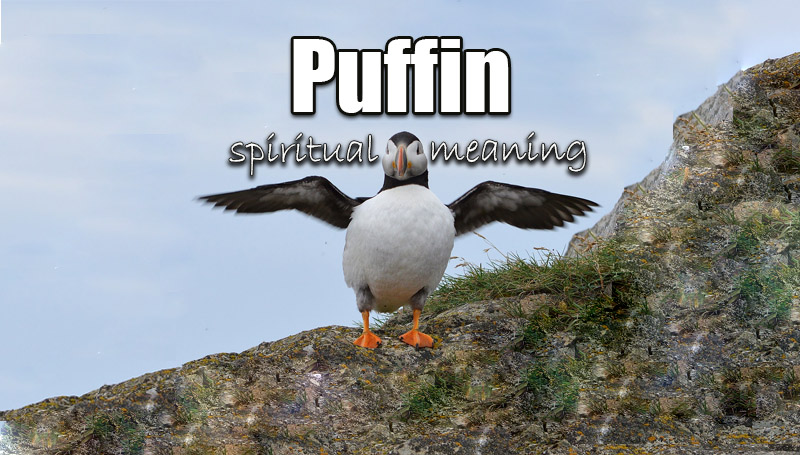 Puffins are interesting birds, both in behavior and in appearance. Therefore, it’s only natural that should an encounter with a puffin would feel spiritually significant. As you read on, you’ll learn that puffins have long been seen as spiritual birds. In fact, puffins convey lots of symbolic meanings and messages. Their striking coloration, of course, also communicates a powerful meaning.

So, when you see a puffin, it comes to you as a sign that our souls endure. If you have been thinking of a lost loved one, take the puffin as a message that everything is fine on the other side.

The Celts aren’t the only people with beliefs about puffins. The Inuit people use the beaks of puffins to craft a special musical instrument. They play the instrument around sickly people, and the music of the puffin beak heals the sick.

It would be impossible to consider the metaphysical meaning of a puffin, without considering its coloration. Puffins are black and white, which is a striking contrast.

Such black and white pairing is, of course, reminiscent of the Daoist/Taoist yin-yang symbol. Which, simply put, is about the inherent balance, connection, and interconnection between light and dark. So, the puffin can represent the essence of the yin-yang to us.

How you should apply this to your context, though, is challenging to encapsulate. But, think of balance versus resistance. The classic example is a stone dropped in a pond. Ripples emanate from where the stone was dropped, and those waves have both peaks and troughs. The ripples have highs and lows. So, while you might want to suffer through what you perceive as lows in your life, it’s important to remember that struggling against challenges is counterproductive at times. Instead, find the balance between all things and all moments no matter how you perceive them. Because, from a trough grows a peak.

It’s true that puffins are, mostly, black and white. But don’t let the black and white of a puffin dominate the message you take from them. Because, the orange of their beaks also conveys a significant message.

Orange is the color associated with the sacral chakra. The sacral chakra interacts with your emotions, creativity, sensitivity, sexuality and intimacy. So, should the puffin’s orange beak catch your eye, it could be a message that you need to pay attention to your sacral chakra and everything that goes with it.

So, if you are feeling depressed it could be that you have a block in your sacral chakra. More specifically, have you experienced emotional instability, particularly with relation to fear? And how about sexual dysfunction? Or, also, a loss of creativity? Then, take steps to unblock your sacral chakra.

Simple and approachable ways to work on healing your sacral chakra include interacting with water. Take a swim in the pool, or you could visit the beach or a lake. Also, don’t forget to take regular baths. And, it might sound obvious, but drink lots of nice, clean, refreshing water—it’ll make you feel great!

Another easy step to take is to think about what you eat. Try to eat orange-colored foods. Things like sweet potatoes and pumpkins. In addition, try some nuts to snack on.

If you want to know more about balancing your chakras, check out our guide right here.

Puffins are expert fishers. They catch fish by diving deep into the seawater. So, what does this symbolize to you? Well, it represents determination and single-mindedness. That means that you will catch that fish, you and your loved ones will eat today. And, you will eat well.

To apply this to your everyday life, think about how you provide for yourself and your family. How can you simplify that, and make it more directed and less wasteful. The risk a puffin takes and the energy it expends when fishing are both considerable. But, they are targeted and effective. So you should be too in your life. Reflect on your life and, without being critical of yourself, consider where you might be expending energy with little return.

Because, after all, the puffin is benefitting from the Earth’s abundance—so should you!

Puffins are colony breeders. This means they gather en masse on rocky islands and breed in burrows right next to other puffin couples doing exactly the same thing. So, as you can imagine, this is a message to us about the importance of society. Remember, nobody succeeds alone. Even the most diligent and hardworking of us should not fool ourselves that our success is our own. Yes, you should feel good about yourself and what you’ve achieved in life, but remember that without society around us nobody succeeds. Stronger together.

Puffins are famously monogamous. So much so that when breeding time comes around, the loyal puffin returns to the same burrow it does every year to breed. And, who will the puffin find in that burrow? Why, its lifelong partner who has also returned to that burrow.

So, puffins give us a message of love and devotion. They represent unshakeable loyalty. It could be a message to you to appreciate loyalty from your partner, and also to return that loyalty to them. However, it is important to remember that puffins and people are different creatures. As such, while we might be inspired to stay loyal by dedicated birds like puffins and swans, it is vital to avoid remaining in toxic and abusive relationships. No omen, symbol, sign or synchronicity should be an excuse for you to subject yourself to the suffering of a bad relationship.

Seek professional help and support if suffering in an abusive relationship.

Cliffs Are Safe… For Puffins That Is

Puffins typically choose safe locations to breed. That is, safe to them!

To us, the cliffs and rocky islands they call home are quite dangerous. And that’s exactly the point. Puffins symbolize the ability to leverage your abilities to possess strength over your enemies. So, in your life think about how you can protect yourself and your family by using what you’re good at. Especially think about things where you excel and others struggle—this is where you will experience great success and receive abundance.

There’s no escaping it. If a bird can fly then it symbolizes freedom. So, of course, the puffin is also a symbol of freedom.

We, being the landlubbers that we are, have always seen birds and envied them. After all, they have the ability to take flight and leave the trials of the ground behind. And, think of the ground, it is burdensome at times. There are mountains to climb, rivers to cross, and—worst of all—traffic to deal with! So, anything that can leave that behind with the stroke of their wings simply has to represent freedom.

When it comes to freedom though, puffins aren’t normal birds. The way they symbolize and offer a message about freedom is fundamentally different to many other birds. This is because, while free, they are anchored to the cliff, their nesting burrows, and their lifelong partners. So, yes, they embrace freedom when they fly out to sea, but they are equally attached to the value that familial obligation offers. Also, they symbolize that the home base is a point of strength.

How this relates to your life is, of course, a matter of personal context. Where do you find yourself in life with relation to freedom and a lack thereof? And how can you, like the puffin, anchor yourself to your own personal strength and the strength afforded through love and family, while at the same time embracing the freedom you need to succeed and thrive?

There is an island off the North Wales coast called “Puffin Island”.

In Welsh, its name is Ynys Seiriol, which means Seiriol Island. You’d be mistaken if you jumped to the conclusion that “Seiriol” was Welsh for “puffin”, because it is not. Seiriol was actually a Welsh saint. In his old age, he retired to Puffin Island which became known as Ynys Seiriol in his honor.