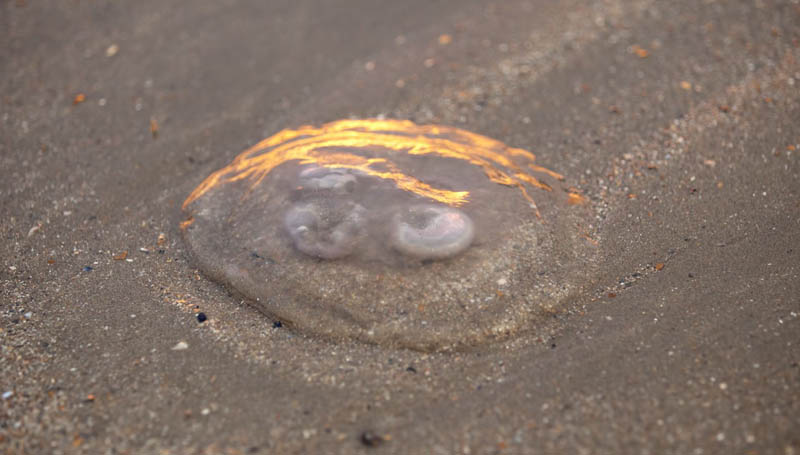 Jellyfish are delicate and captivating creatures, often called “the floating flowers of the sea.”

They come in a wide variety of colors and sizes, and their gentle movements can be mesmerizing to watch.

But there’s something unsettling about seeing a jellyfish stranded—out of water and lifeless on the sand, they just look kind of gross.

It’s natural that they would look so bizarre out of water. Couple this with the fear that they could still sting us even when they’re dead.

Ultimately, jellyfish are not typically seen as friendly creatures when they’re washed up on the shore. And for tourists visiting the beach, they can be downright scary!

However, just because something is unpleasant, doesn’t mean that it doesn’t convey a meaningful spiritual message. In this article, we’ll talk about what it means to see a jellyfish washed up on the beach.

Jellyfish have long been associated with intuition, this is because they lack complex vision.

Additionally, jellyfish convey the ability to go with the flow. This is because jellyfish are largely at the mercy of the ocean currents, drifting wherever they may take them. This is reflected in their graceful, sinuous movements, which often appear to be effortless.

Jellyfish On The Beach Are Out Of Their Element

Washed up on the beach, jellyfish are out of their element. In the ocean, they are graceful creatures that float on the gentle currents. But on land, they are heaps of jelly-like flesh—helpless and grotesque.

It’s difficult to, in our imagination, appreciate that these two creatures are one and the same. But that’s the power of water—it can transform even the most delicate creature into something unrecognizable.

When you’re in a situation where you feel comfortable and at home, everything just seems to click. You’re able to think more clearly, you’re more productive, and you just generally feel better.

The jellyfish, in the sea, floating effortlessly, embodies what it feels like to be in one’s element.

Conversely, when you’re out of your element, it can be a struggle. You may feel uncomfortable, anxious, or even scared. This can lead to difficulty thinking straight, making decisions, and communicating effectively.

A beached jellyfish can be received as a message or omen that you are, or are possibly to be, out of your element.

Ultimately, this is nothing to worry about—fortunately, us human beings are much more adaptable than jellyfish. You can succeed even if you do find yourself in unfamiliar surroundings.

Without Eyes, We Must Rely On Our Senses

Although jellyfish don’t have “real” eyes in the traditional sense, they are able to detect light using simple light detectors.

These detectors are located throughout their body, and they help the jellyfish to orient themselves in the water.

Animals without eyes represent the sixth sense. The ability to perceive that which cannot be seen with the eyes.

This is most often seen in the form of extrasensory perception, or the ability to sense the future. Indeed, animals without eyes have long been revered by many cultures as being special creatures with a connection to the divine.

As such, a beached jellyfish can represent difficulties with your intuition.

Going With The Flow Gone Wrong

There’s something to be said for going with the flow. When you surrender to the moment and trust that everything will work out, you often find yourself in the right place at the right time. Jellyfish, as mentioned above, are symbols of “going with the flow”.

But, going with the flow isn’t always the best choice.

There are times when going with the flow can lead you astray. If you’re not paying attention, you can miss important turning points and end up in choppy waters.

That’s why it’s important to strike a balance between following your heart and using your head. Trust your intuition, but also put your intellect to good use. The beached jellyfish omen is a warning sign that, sometimes in life, if you don’t take corrective action, you could end up high and dry.

Jellyfish Can Still Sting When Dead – What It Means For You

Even if a jellyfish is beached and appears to be dead, it can still sting you.

Just because a situation seems like it has ended, doesn’t mean it’s definitely over. The beached jellyfish is an omen of this.

It’s important to be aware in case the problem returns. If you’re not careful, you might find yourself in the same position again.

A dead jellyfish can still sing you.

So, it’s important to learn from your mistakes and move on. While making sure you’re prepared for the same drama to darken your doorstep at any time.

Conclusion: Meaning Of Finding A Jellyfish Washed Up On The Beach

The next time you find a beached jellyfish, consider its spiritual meaning.

As we discussed, a beached jellyfish stands for difficulties with your intuition.

The stranded jellyfish can also be emblematic of the problems “going with the flow” can cause you.

Additionally, a beached jellyfish may imply that an old problem may come back to sting you unexpectedly.

At Symbols And Synchronicity, we’re big fans of the beach. So, it’s only natural that we’ve written about the spiritual meaning of finding or seeing different things when taking a visit to the coast.