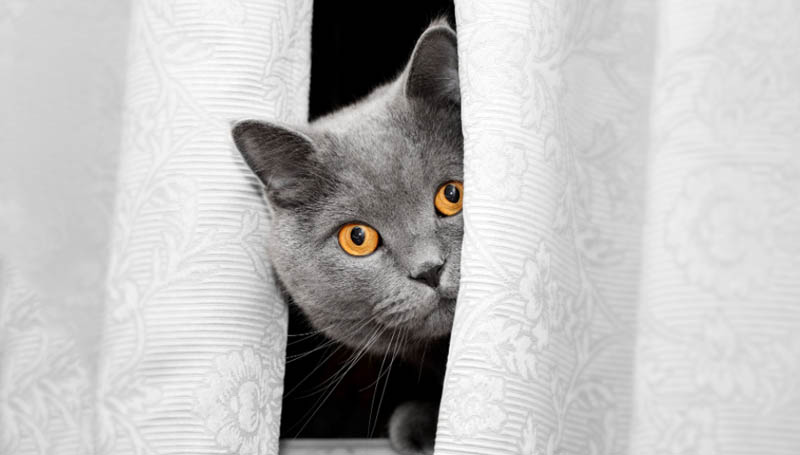 What’s the spiritual meaning of a gray cat crossing your path?

When we think about meaning and cats, the one we’re most likely to jump to is, of course, the black cat. Placing meaning on encounters with black cats is a common superstition. Black cats aren’t the only ones, though. There’s also spiritual meaning associated with seeing white cats, too. So, if black cats convey meaning, and white cats convey meaning, then it only follows logic that gray cats might mean something, too?

So, in this article we’re going to take a closer look at gray cats and what meanings, beliefs, omens, and messages can be associated with an encounter with a gray cat. To understand the meaning of a gray cat, though, it’s best to consider the foundational elements that contribute to the meaning. That is, first of all, what do cats represent in isolation regardless of color? Once we know that, we can get into the color gray—what does the color gray represent and what are the meanings associated with it? After we have those two cornerstones, we’ll combine them to best understand the spiritual meaning of seeing a gray cat.

Additionally, we’ll also consider gray tabbies (which are often also called “silver” tabbies). But, that’s not all! We also mention the Nordic goddess Freyja and her special association with gray cats. And, last but not least, we also look at what it means to dream of a gray cat.

It goes without saying, that cats are very symbolic animals. After all, they feature in mythologies and beliefs all over the world—from the Egyptian Bastet to the Japanese bakeneko. Just about wherever you go in the world, you’ll find spiritual beliefs that relate to cats. So, cats, of course convey a great deal of meaning to people all over the world.

But, what are the specifics of some of those meanings? Well, what do we think of when we think of cats? Our language is full of idioms, and cat-based sayings are quite common and, therefore, well worth consideration. “Curiosity killed the cat” is a good place to start. We see cats as inquisitive creatures, that investigate their surroundings carefully if somewhat dangerously. Therefore, it’s fair to say that cats convey a spiritual meaning of curiosity.

That isn’t all, though. Cats are also associated with grace. This is because they move in a way we find visually attractive—some might say that cats “slink” around more than they walk or run. As such, cats have come to be powerful symbols of grace, elegance, and agility. This almost goes without saying, though. We all know that cats are renowned for their ability to move, jump, climb, and sneak their way around the world. If we say somebody is “cat-like”, it is a wonderful and kind compliment—this is because you’re saying a person is not only graceful, but usually sleek and slender.

When you keep a cat as a pet, you could be forgiven for forgetting that it is a veritable killing machine. When we see our cats doing silly, cute, and endearing things, we naturally project positive judgements onto them. However, even the most well-domesticated cat would likely make short work of a robin, sparrow, or squirrel. As such, cats represent that ruthlessness. Cats are symbols of violent power, innate and natural in every way. It’s easy to understand why powerful empires around the world have often taken cats as emblems or crests.

Meaning of the Color Gray

Don’t let the haters tell you how to feel about the color gray. Sure, of course, we might feel like it’s a bit of a drab color. And it wouldn’t be unfair to say, hey, gray is pretty dull when you compare it neon green or hot pink. However, gray is absolutely full of meaning. By its very nature it is, one could argue, the most meaningful color there is.

Think about the old timey Saturday morning cartoons. In those, you have a good guy and a bad guy and, often, it’s as simple as that. The good guy stands for light, i.e. white, and brightness. Whereas, the bad guy represents a lack of light, i.e. darkness, shadow, and blackness. Any adult with half a brain can tell you that that isn’t how the real world works! “Good” people sometimes do “bad” things for so many reasons, and vice versa. The color gray is all about people, complexity, and loving people no matter where they fall on the grayscale at whatever moment in their journey.

So, therefore, we can take the color gray to represents understanding, appreciation, and kindly ambivalence. We could all do a lot worse in life to, when encountering conflict with other people, remember the message of the color gray. Sure, the shade of gray isn’t always exactly in the middle between black and white, but that’s the whole point! Because gray is really about the infinite possibilities of perspectives.

So What do Gray Cats Represent?

A gray cat really is—symbolically speaking—the quintessential cat! Cats are, generally, cool and calm—but, changeable. And that is a way of being that sure is represented in the color gray. It stands for coolness, dullness, drabness. However, at the same time, gray stands for the entire range between black and white. So, when cats explode in a flurry of odd behavior, that’s definitely under the umbrella of grayness. As is their general sleepiness during the rest of the time.

The color gray amplifies a cat’s ability to embody, represent, and communicate its many different moods and positions. The cat’s warmth is never entirely altruistic, while it’s coldness is never entirely detached. A gray cat represents the human who flirts between sociability and solitariness. If sometimes you like to hang out with the gang, and sometimes you like to stay at home and get caught in a YouTube vortex, then the gray cat is your cat.

In terms of spiritual advice from encountering a gray cat—well, that, as always, depends. It depends on you. Specifically, what is your context and what do your instincts tell you about the encounter. A gray cat encounter could mean many things. That’s inherently so, because not only does a gray cat represent the range of shades of gray, it also represents the feline penchant for changeability. Therefore, deciphering the omen is challenging. For example, it could be that you need to pull away from troublesome social obligations. But, at the same time, it could mean the opposite—maybe you’re being too extreme in your isolation, i.e. seek out some companionship!

Are Cats Crazy or Sleepy?

So, now that we’ve established that the color gray and cats, symbolically, have some synergy regarding a broad range of behavior, we’re able to apply that to you and your situation. Specifically, it could be that your behavior is too erratic, or maybe you’re burying your eccentric side. Also, it could be that you’re supposed to tempter your behavior somewhere in the middle. That’s the color gray: the honest complexity of reality. Because this representation is all about range of behavior, it’s difficult to say “hey, this is the message”.

Cats are aloof little critters, aren’t they? More often than not they’re not paying attention to you, and if they are, even then they couldn’t care less what you’re doing. We’re people, though, and they’re cats. We’re social animals, and they’re quite solitary animals. So, we don’t necessarily want to become like cats and ignore the people around us. However, we don’t want to be too focused on other people and what they’re doing. So, there is something we can take from the cat omen. The color gray really synergizes well with this message, too. Gray is about the range of types of people, and more importantly, being accepting of people.

Acting on the Gray Cat Omen

So, how do you figure it out? Well, the best thing to do in cases like this, is to reflect and focus on what resonates with you from the mixed message. Omens, signs, and messages from the universe are great. However, the wonderful intellect you’ve been gifted is enough to identify your problems. So, think on it, and you’ll know what to do.

Spiritual Meaning of a Gray Cat Crossing Your Path

A gray cat crossing your path is an amplified version of a general meaning of an encounter with a gray cat. When it crosses your path, the feeling that the message is aimed at you is more intense. So, when a gray cat crosses your path, as discussed above, it is important to review how you behave in social situations and to reconsider your social obligations. Also, spend time considering any excessive judgment you pass on others. Last, but not least, think about your own habits and where they fall on the scale of grayness—are you happy with that? Do you need to lighten up a little bit? Or are you a bit too loud, and you need to cool it off some? Reflect on it, you’ll know what to do.

Are Gray Cats a Good Omen or a Bad Omen?

So, ultimately, encountering a gray cat isn’t really about a “good omen” or a “bad omen”. Rather, coming across a gray cat is more of an opportunity and encouragement to reflect on our current situation.

With black cats, there’s a debate as to whether they’re “good luck” or “bad luck”. But, when it comes to gray cats, there’s no such associated superstition that they are either good or bad luck. As such, it’s safe to say gray cats are not good luck, but they’re not bad luck, either.

Freyja, for those unfamiliar with this Norse goddess, is associated with fertility, femininity, female sexuality, sorcery, magic, and domesticity.

But, what’s she got to do with gray cats? Well, famously, she rode a chariot. It is said that that chariot was pulled by two large, powerful, gray tabby cats! So, therefore, if you encounter a particularly large and impressive silver tabby, it could well be that you’re receiving a message from Freyja herself. That message, of course, relates to all she embodies.

Dream Meaning of a Gray Cat

Dreaming of a gray cat is certainly a significant experience. Many people believe that the dream world is a place where many different realities connect. What is meant by that, though, depends on your personal beliefs—it could be the “Other Side” connects to you through your dreams, or it could be that other people in our own world somehow send you messages through your dreams. Of course, there are no definite answers on it, we all have our different beliefs.

But, if a dream truly is a place where you’re able to connect with other souls, then to dream of a gray cat could be taken as a message from a friendly soul. Because the dream is more of a direct message, it has a lot in common with the meaning of a gray cat crossing your path. That is, the message to review your social obligations is quite direct.