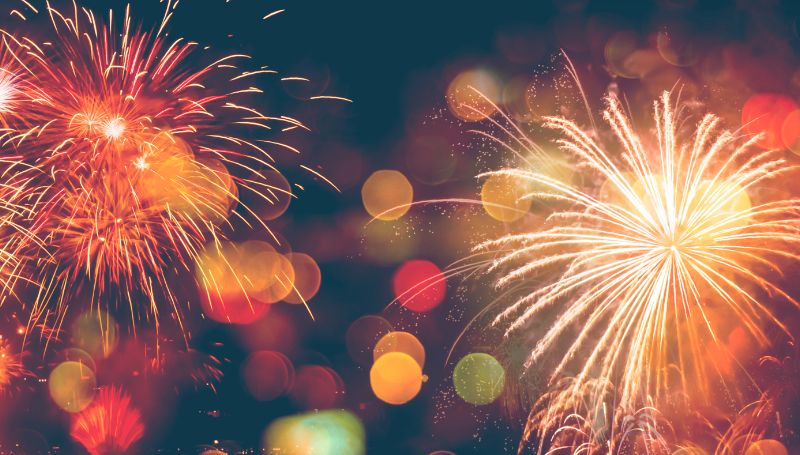 Wow, fireworks! Some holidays just aren’t the same without their beautiful colors and elegant displays. When it comes to fireworks, there is more to them than just pretty lights in the night sky. In fact, fireworks have a long history of being used for religious and spiritual purposes. So, it’s only natural to wonder, what’s the meaning of fireworks? Well, you’re in the right place. We’re going to take a look at the symbolism and spiritual meaning of fireworks.

Fireworks are obviously associated with good luck and prosperity. In many cultures, fireworks are even believed to bring good luck and fortune! That’s why you’ll often see fireworks being used at weddings, holidays, and other special events. It’s like adding more good luck to already good luck.

Fireworks have been used in religious ceremonies for centuries across most of the world. In China, fireworks were used to scare away evil spirits. In Japan, fireworks are still used in some Shinto rituals. And in India, fireworks are commonly used during Diwali, the Hindu festival of lights. But, it doesn’t just stop there. First, we’ll take a quick look at the uses of fireworks around the world. Then, we’ll get into the individual symbolism of hearing and seeing fireworks. So, let’s get started!

Symbolism Of Fireworks Around The World

So, by now we already know that fireworks are often associated with celebrations and holidays like the Fourth of July. But, what does it mean when you hear fireworks unexpectedly? Some people might say it’s a sign from the universe or a higher power. Others might say it’s just a coincidence. But, we all know there are no coincidences in life when it comes to synchronicity. And, fireworks have been known to symbolize spiritual awakenings and enlightenment!

So, if you hear fireworks going off in the middle of the night, don’t be too surprised. It could be the universe trying to tell you something! And, that something could be Quite important!

Remember, when you only hear fireworks without seeing them – pay close attention to thing that are may be overlooking. In other words, what’s in front of you that you may not be seeing? Sometimes hearing a firework randomly can be quite upsetting and startling. So, it may be quite shocking what you’re overlooking because of your own limiting beliefs and mindset.

Take some time to make sure you’re paying attention to the blessings right in front of you!

When you see fireworks, it typically means that something special is happening. It might be a holiday like the Fourth of July or New Year’s Eve, or it could be a victory celebration for a sports team. Whatever the occasion, fireworks are often used to add excitement and surprise. But, what does it mean when you see a random firework?

On a spiritual level, seeing fireworks is almost always a sign of good luck. This is because fireworks are associated with both light and energy, which are extremely positive forces. Fireworks are also said to represent life’s celebrations and triumphs. So, if you see fireworks in your dream or meditation, it could be a sign that something wonderful and surprising is about to happen in your life.

And, it’s important to note unlike only hearing fireworks, seeing them means your surprise and victory will be completely transparent and visible. This could mean that something you’ve been working on for a long time will finally come to fruition.

What Does It Mean When A Random Firework Goes Off?

Some people believe that fireworks are a sign from the spiritual realm. They interpret the sound or sight of fireworks as a message from their deceased loved ones, or as a way for the universe to send them a sign. While there’s no scientific evidence to support these claims, it’s not impossible to imagine that fireworks could have a spiritual meaning.

After all, they are often associated with special occasions and celebrations, which could make them feel like a sign of good things to come. And for some people, the surprise and excitement of hearing fireworks can be enough to trigger a spiritual experience. Whether or not you believe in the spiritual meaning of fireworks, there’s no denying that they can be a powerful and awe-inspiring sight.

So, what does it mean when a random firework goes off? Well, you may want to expect the unexpected. Surprises are in the air – just like fireworks!

Did you know that fireworks could mean that love is on the way? That’s right! Maybe you’ve even seen those cheesy cuts in movies where exploding fireworks play overtop of a romantic scene. Always hated watching those with my parents growing up. Talk about awkward.

But, fireworks exploding is only a natural way to capture the feeling of falling in love and being intimate with a romantic partner. It’s all of this build up into a surprising release of joy and happiness. So, know that seeing fireworks is a pretty good omen that a new romantic interest is possibly on the way to you.

But, fireworks don’t just represent passion. Remember, fireworks represent good luck and celebration. And, all kinds of positive things in life! All of which are great things to have when entering into a brand new beginning in a relationship. So, if you’re looking to bring new love into your life, know that it will be full of success and pleasant surprises.

Fireworks are almost universally known as a good omen! They are most importantly linked to celebration, joy, and victory! Here’s a quick list of keywords associated with fireworks symbolism:

Bottom line: Fireworks have a long history of being used for religious and spiritual purposes. They are also associated with good luck and prosperity. If you’ve been dreaming about fireworks lately, it could be a sign that something special is about to happen in your life.