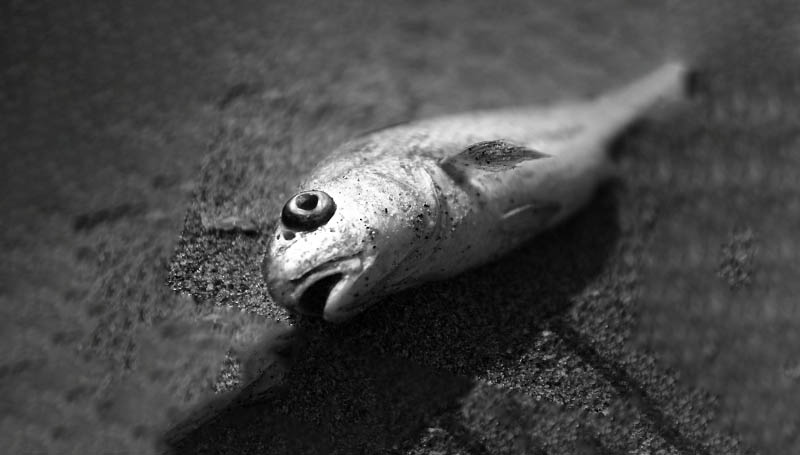 I was walking to the grocery store when I found a fish—a bluegill, I think—in the middle of the street. It was completely dried out and obviously long dead, but it looked undamaged otherwise. I wondered how it had gotten there; maybe a bird had dropped it. But, had a bird caught it and dropped it, surely it would have shown signs of damage to its body. In any case, it was strange to find a fish in the middle of the city. I continued on my way, but I couldn’t help wonder if there was an omen or spiritual meaning associated with such an odd sighting.

What Do Fish Represent?

Here’s a quick list with some of the more central themes associated with the spiritual and symbolic meaning of fish:

Fish have been used as symbols of fertility for centuries. It’s easy to understand why—in times gone, their numbers seemed to be endless. All we had to do was cast a rod and we would find the water to be teeming with life. If you doubt that, ask some old timers—they’re sure to tell you the fishing was better in their day.

From the perception of an endless supply of fish comes the next core representation of fish: abundance. Spiritually and symbolically, fish represent abundance. After all, they’re one of the human race’s central sources of food.

In many cultures, fish are also seen as a representation of the emotional realm. Fish live in the water, which is often seen as a symbol of the subconscious mind. As such, they can represent our deepest, and often least understood, emotions. When we see fish in our dreams or meditate on their image, we may be tapping into our hidden feelings and emotions.

Streets Are All About Travel

If you found a fish in the street, and wondered about its spiritual meaning, you probably didn’t realize that the road you found it on will be just as meaningful as the fish itself.

Streets and roads have always been more than just a way to get from point A to point B. They are evocative, living emblems of travel and motion, of movement and journey. They are also places of great spiritual significance. After all, the roads seem to capture the feelings of those traveling on them, the heat of summer baking the hopes and dreams of travelers into the very asphalt beneath their tires.

Let’s Talk About Your Fish

Unless you’re incredibly lucky, the fish you’ll find—like the one I found—will likely have long since lost its battle. There’s a natural habit to see death as an omen of death, but that’s far too narrow of a view. The fish isn’t a portent of doom, it does not suggest misfortune ahead. Instead, the fish you found, in death, represents the end of a cycle.

What is that cycle? Well, honestly, who knows. Cycles begin, progress, end, and then they might begin again. Or, alternatively, a new and different cycle begins in its place. What’s important when decoding the omen you received, is reflecting on the other detail: that you found it on a road, street, or in your path.

So What Does It Mean To Find A Fish In The Street?

And this is where we really get into the real meaning of finding a fish in the street.

Applying this admittedly murky omen to your day-to-day life can, of course, be difficult. Ultimately, though, it will rely on your own personal reflections. What thoughts and feelings resonate with you when you focus on the experience of finding the fish?

Reading the omen as the prophecy of an end on your journey towards subconscious desires and/or material abundance is unwise. Instead, it is better to view the sign as a suggestion that, if a particular method isn’t working, it could be time to end the old cycle and begin a new cycle. That means, hey, consider your options—there’s more than one path that leads to the realization of your hopes and dreams.

Is Finding A Fish In The Street Bad Luck?

At Symbols and Synchronicity, we love fish. In fact, we even have an aquarium in the office—it’s freshwater, full of lush, verdant, live plants, and teeming with freshwater shrimp and Japanese rice fish!

So, naturally, we enjoy putting out articles about aquatic life. We’ve got a few in our back catalog, check them out here: