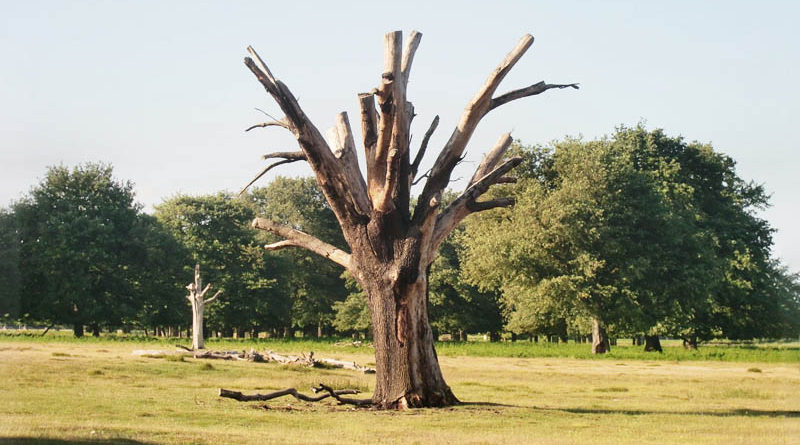 Dead trees are mighty spooky, aren’t they? Especially when they’re a distance back from the edge of the road, out in the country, eerily next to an old, falling in house from a bygone era. You can’t help but be emotionally affected by the sighting of a foreboding dead tree. So, you might wondering—is there a spiritual meaning there? Or perhaps an omen? And how about the symbolism?

Well, in this article we’re going to get into it. And, be warned, it’s a bit grim. Because there’s no escaping it, a dead tree is a powerful symbol of death. But fear not, it’s not all bad. There’s some yang for that yin, don’t worry.

Before we understood the spiritual message from a dead tree, it’s important to establish the meaning of a living tree. So let’s start by thinking about the symbolism of trees mean in general.

Cultures from every corner of the globe have a concept of a “World Tree”. Typically, the different notions of the world tree place the tree as something of monumental importance. For example, the tree can be the giver of all life or the center of the universe. So, naturally, to those of us who have a concept of a life-giving tree, it’s only natural we are unsettled by the sight of a dead tree.

Generally speaking, we associate trees with wisdom. This is, of course, due to their unfathomable longevity—consider this: the oldest living tree is thought to be around five thousand years old! If you haven’t learned a thing in two after five thousand rotations around the sun, then yikes, you might not be paying attention. Also, don’t forget the Bible and the Garden of Eden’s famous Tree of Knowledge.

Deciduous trees especially are associated with the cycle of death and miraculous rebirth. This is because of their annual habit of dropping their leaves in the fall then regrowing them in the spring. There could be no stronger symbol in the natural world of life, death, and life again.

Remember, not every tree loses its leaves in the winter. Of course, lots of trees are entirely evergreen. But, in spite of this fundamental difference between deciduous and evergreen trees, they still manage to represent the power of life (and eternal life). Just in a different way. Consider the spiritual and symbolic significance of evergreen trees never shedding their leaves/needles/etc—as such, they endure as a symbol of eternal life. Moreover, in the depth of winter’s icy grip, the evergreen tree withstands the cold to remind us that even in the darkest, coldest hours… hope persists.

Let’s not beat around the bush (pun intended). A dead tree is a symbol of death. And it’s quite a profound and significant symbol of death at that. This is because, in life, trees are so strongly associated with life. As mentioned above, they display incredible longevity. That long-lasting life makes them seem effectively immortal to us. So, the sight of a dead tree can move us and upset us.

A dead tree is an omen of the end of the something. It doesn’t necessarily mean that you are going to lose somebody close to you, nothing like that at all. Often death omens are more about the end of cycles in your life. When it comes to a dead tree, it’s spiritual message that something very significant indeed is coming to an end though—especially something that has been going on a long time. Again, it’s not necessarily anything to fret over. In fact, it could very well be a good thing. Because when one process, experience, status quo, or habit ends then there’s a chance for something better to grow in its place.

Dead Trees: Symbols That Life, Death, and Rebirth Affect Even the Mightiest of Earth’s Life

And why do we become so upset at the sight of the a mighty tree having died? Well, because the tree, in life, was mighty. It seemed impervious. Perhaps it grew for decades, centuries, or even millennia! But, suddenly, its life was taken away. Its mighty trunk, protected in a coat of thick armor-like bark, is rotting and crumbling away. How could this be? How could death even take the most long-lived and toughest of all nature’s creatures?

Of course, that is why it is so profoundly upsetting to us. Because, after all, death takes even the most resilient among us. In life, it can be upsetting to be reminded of that inevitability.

However, it’s not all doom and gloom: keep reading.

Positive Meanings of a Dead Tree

Even in death, the tree persists as not only a symbolic, spiritual, and metaphysical focal point of all life—a dead tree is also the literal life-giver.

In the earliest days of plant life spreading from the water to the land, plants were—of course—linked directly to the water. This meant that early terrestrial plant life had to grow around swamps, ponds, rivers, coastlines, etc. Early plant life had no way whatsoever to hold onto moisture when they grew emersed.

This is where trees come in! You might think trees evolved bark so they could grow big, tall and strong? But you’d be wrong. Current thinking is that small plants (smaller than trees that is) evolved bark as a way of holding their water in. Being able to grow big and strong was just a happy side effect.

So, you might be wondering, what does scientific understanding of early tree evolution have to do with spirituality concerning trees? Well, it dovetails quite nicely with the profound status we afford trees, i.e. the ultimate life-givers, the center of all life, the symbol of all life.

Scientists now believe that dead trees and rotten leaves provided the rich and fertile dirt, soil, and earth from which all other plants grew. So, without trees, there would be no lush, green, verdant growth all over the earth. Without trees, we wouldn’t exist.

Therefore, don’t be too sad when you see a dead tree. Remember that as the bark, trunk, branches and boughs break down, they are returning to the earth. They are not only returning to Mother Earth, they are nourishing her. In death, the tree affords life to all.

Rotten wood is very symbolic indeed. This is because for the entirety of human civilization, wood has been a vital material. In fact, you could argue it has been our most important building material. It is strong, yet ever so slightly flexible and workable—it is an excellent building material. We use it for everything from our houses to the ships we explored the ocean with.

So, that’s what wood represents. It represents strength, safety, security, and defense. Therefore, when we see wood rotting on a dead tree, we’re often struck with an uneasy and foreboding sense. The omen there is clear, there’s a possible weakness in a defense or structure in your life. What that is, though, is always difficult to pinpoint—it really depends on your own intellect, intuition, and understanding of your own personal context. Consider your life and think about any creeping risks you might have been ignoring and address them appropriately.

Of course, worth considering is the fact that a dead tree is a literally dangerous tree—if you have one in your yard, call a tree specialist before the darn thing falls on your roof!

Meaning of a Partially Dead Tree

Again, speaking of risky situations, the kind of tree where only half of it has died off while the rest lives, can also be a problem—again, consult tree experts to find out whether any suspect trees on your property require professional attention to make them safe.

Spiritually speaking though, a partially dead tree is a very interesting omen. It means that part of something is going to die off and break away from a well established element in your life. Total death omens are simpler, they represent the total end of something. A good way of explaining the difference would be to use your job as an example. A totally dead tree could be an omen that you will leave your job, and pick up a new job in its place. Whereas, a partially dead tree could imply that your hours at work might get cut or, to keep it positive, you might opt to choose to switch to part time so you can pursue other endeavors.

What Does it Mean to Dream of a Dead Tree?

When you dream of a dead tree, some people believe that that message has come over the spiritual “airways” as a message from another soul to you—a way of sending advice, as it were. This is because there is a belief that dreams exist as a convergence point between our world, and the other worlds, places, realms, dimensions (or whatever you want to call them).

So, ultimately, the spiritual meaning of dreaming of a dead tree remains similar to seeing a dead tree in real life—that is, it’s an omen of major change, but one that conveys the ultimate lifegiving power of trees, and the cycle of life that something good, nourished, and rewarding will come in the place of what was lost. However, the message comes with a little bit of spice, because some would argue that the message was sent to you by a kindly soul somewhere out across the universe!